Maroons ousted by Wash U in round of 32

The Maroons completed their most successful season in school history in the NCAA tournament this past weekend. 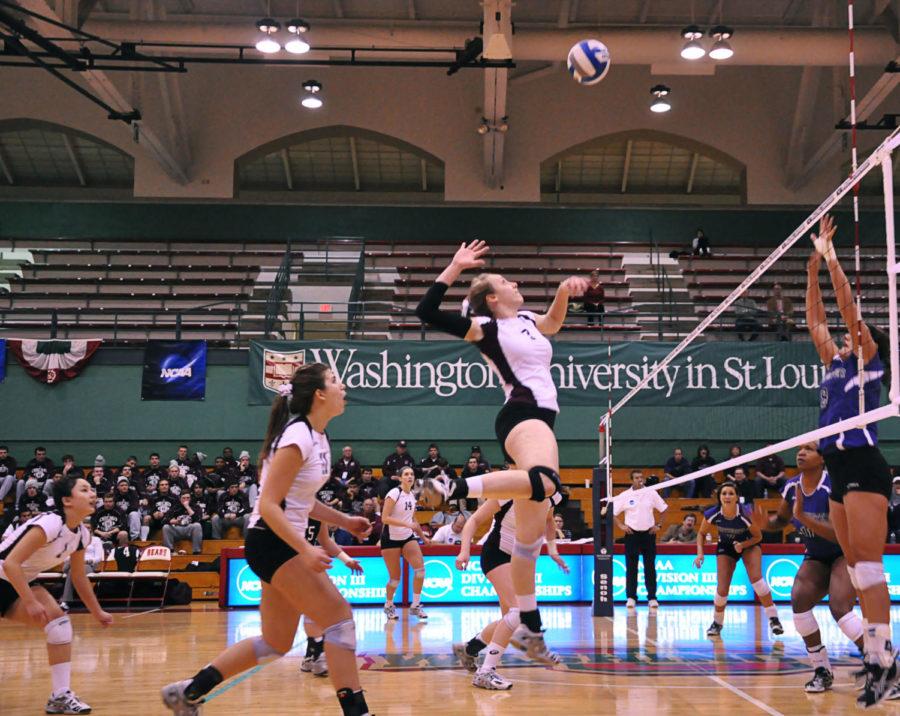 The Maroons completed their most successful season in school history in the NCAA tournament this past weekend. 15th-ranked Chicago finished the season at 30–6, tying the school record for wins and matching last year’s total.

In the first round of the tournament, Chicago encountered 21st-ranked UW-Whitewater. The Maroons were heavily favored against the Warhawks, who had won the WIAC championship earlier this month.

The Maroons seized the first game and had a lead deep in the second when the Warhawks surged to take the second set. However, the Maroons would have none of the towel-waving, and they brusquely shouldered past UW–Whitewater for a final score of 25–22, 23–25, 25–14, 25–16. Second-year Morgan Clark and fourth-year Colleen Belak led the offensive attack with 11 kills each, and the Maroons hit at a .258 clip.

“Whitewater was one of the best matches we’ve played this season. We were all focused and executing, confident and excited,” second-year Nikki DelZenero said

“I think that we came out and played extremely well against UW–Whitewater. They are a seasoned and tough team, and we knew that we were going to have our hands full. Our team played a really balanced game. Our setter did a nice job of balancing out the offense, and it was difficult for UW-Whitewater to key up on [any] one individual,” said head coach Vanessa Walby.

“The Whitewater game displayed our true ability to control a match and execute every point to our greatest ability. I am proud of the effort, strength, and full-out control we showed in the Whitewater game. We played steadily throughout most of the match, maintaining momentum and controlling the pace of the game. We hit a .258, which is probably one of our season’s higher marks,” said Belak.

Chicago then encountered one of their rivals, second-ranked Wash U. The Bears had defeated the Maroons twice before this season and were one of the top seeds in the tournament. From the start, the Maroons were well aware of the hazards in their section of the bracket and that they would have to play Wash U as early as the second round.

Wash U made several early incisions in each game and then brought to bear the full decisive quality of their side on the Maroons, winning 25–17, 25–22, 25–16. Clark and fourth-year Isis Smalls had their hands full with six kills apiece, but were unable to stem the blitz of the Bears. Third-year Sam Brown bravely offered 19 defensive digs while Belak provided a comprehensive effort with five kills and 13 digs. The telling score, however, was the Maroons’ hitting percentage of .085 compared to the Bears’ .330.

“We knew that Wash U was going to be tough, especially on their home court. I think the hard part of this match was that we started every game with a five- or six-point deficit. Against a team like Wash U, it is hard to dig yourself out of a hole. By the time we did it was just a tad too late. I will not fault the effort of our girls though. They played hard and did an excellent job of shaking off each play and starting out fresh,” said Walby.

“The Wash U match was different from the past two times we had played them this season, but not exactly in a good way. We were up and down, winning some fantastic rallies and then letting them have two or three easy points. We competed, but it wasn’t good enough. Every single one of us needed to be at the top of our game, and we did not play our best as a team. It’s extremely disappointing; I know we could have done better,” said DelZenero.

“It’s hard for me as a member of the team [and] I can’t imagine exactly how our seniors must be feeling. They were the class that established the program as a winning one, and I haven’t played college ball without them,” said second-year Katie Trela.

Nevertheless, the result of the tournament and the season was a torch to bear. “I am very happy with our improvement in the tournament. I think that it is something that the seniors can feel good about ending on,” said Walby.

Indeed, the Maroons of 2011 have lit a flame that will be hard to extinguish in the coming generations of Chicago volleyball. With the win against UW-Whitewater in the first round of Nationals, this team has advanced the furthest of any Chicago side in postseason play. Their tournament birth marks the second consecutive year of NCAA play for the Maroons, and an historic achievement for volleyball in Walby’s current tenure.

On a personal note, fourth-year Isis Smalls also ended her stint at Chicago as the all-time leader in kills in school history, though she humbly defers the honor.

“I have learned worlds about what it means to love and respect your teammates, what it means to lead people and to learn how to follow, and what it means to develop a good work ethic,” Smalls said. “It’s not just about what you do on the court, but about the person that your sport can influence you to become for the better if you take advantage of the opportunity.”

Belak also had words of gratitude. “Let me say how proud I am of my team for everything we have accomplished this year. We had a great run this season, and though we ended on an unfortunate note, I am immensely grateful for every person who contributed to our success. From every single one of my teammates, to my coaches, to all the families who made it out to all the games, to the fans who supported us in home games and away: It was truly a group effort on all fronts,” Belak said.

While the fourth-year players on the team are proud of their achievement, the promising underclassmen are looking forward to carrying the torch.

“This continued establishment of “Winning is the only option” is a distinct step closer to making more history next year,” Trela said.

“I’m so proud of my team and honored to be a part of the history-making season we experienced this year,” DelZenero affirmed. “There will be more to come next season.”