After 75 years away from the University, Delta Tau Delta is trying to reestablish a campus presence. Zeta Beta Tau, another new fraternity, is also trying to expand. 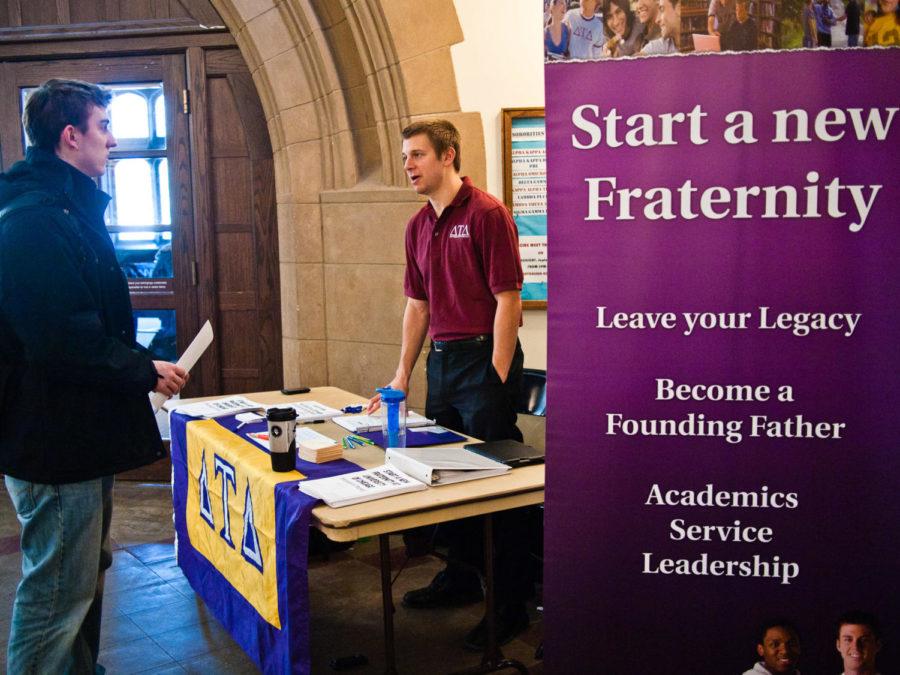 A fraternity that first bade farewell to the U of C during the Great Depression is back on campus, chancing the addition of three new Greek letters to University Avenue.

For the past two weeks, representatives from the Delta Tau Delta (DTD) fraternity—which left the University in 1935—have been tabling in Reynolds Club hoping to attract enough students to start a new chapter. After their first week of tabling, second-year Michael Reinhard signed on as the first of the chapter’s 24 “founding fathers.”

“It’s always interesting when you got guys from all over campus who don’t know each other,” said Doug Russell, one of three chapter consultants who has led recruitment efforts on campus. “It’s been fun to watch the guys get to know each other through the different events we are having and forming a cohesive bond.”

Although the fraternity no longer owns its former fraternity house located at 5607 University Avenue, the national organization is optimistic that DTD will reestablish its presence on campus, focusing first on bringing the number of quality recruits up to the campus chapter average of 30 by year’s end.

Russell, along with chapter consultants Tim Gaffney and Matt Stein, have been recruiting aggressively, reaching out to other Greek life organizations and even hosting a competition among the University’s sororities, offering $250 in philanthropic giving to whichever one can refer the most potential pledges.

“We’re going to be working with all the sororities,” Russell said.

In particular, the appointment of Kirsten Siron as assistant director of student activity and Greek life has been a helpful development, coinciding with the hiring at DTD of a new director of growth, who is responsible for the establishment of “colonies” (precursors to chapters) at different universities.

“Kirsten [has been] helpful in linking us with sororities. It’s honestly been great, and it’s because we have a connection to the Greek community [before starting a chapter],” Burns said

The motivation for coming to the U of C was two-fold, Russell said, explaining that the fraternity had been waiting for the “right opportunity” from both Delta Tau Delta and the University. Russell also said that the “prestige” of the University was a factor, particularly regarding its fifth-place national ranking in this year’s U.S. News and World Report.

DTD are still currently meeting with organizations such as the Hyde Park Neighborhood Club and on-campus RSOs such as Global Brigades to better focus their philanthropic efforts. Talks about bringing the fraternity to campus began when Siron spoke to the Director of DTD at a Greek event and initiated the process last quarter.

The reasons behind DTD’s departure in 1935 are not clear, according to Russell.

“It’s really funny. You would think we would know the answer to that. Times were a lot different then, too,” he said.

Before leaving the U of C, DTD’s chapter here produced notable alums like Harlan “Pat” Page (A.B. ’10), the hall of fame basketball coach and early powerhouse on the Maroons, Paul Hoffman (A.B. ’12), president of the Studebaker Corporation and an administrator of the Marshall Plan, and Fowler McConnell (AB ’16), president of Sears Roebuck.

DTD isn’t the only fraternity putting down roots on campus.

Like Delta Tau Delta, representatives from the Zeta Beta Tau national organization have reached out first to a select group of students—four of whom responded enthusiastically to efforts to start a chapter on campus.

“It’s going to be a slow process,” Burns said.

Burns noted that the fraternity was “not just one group of people, of one sports team,” but instead includes a wide cross-section of students across the University.

Zeta Beta Tau has chosen the Chicago Miracle Network as its philanthropic partner. The colony is currently holding a clothing drive for a women’s shelter in the Ingleside area, working with student coffee shops after the administration barred it from placing collection bins in the dining and residence halls, Burns said