Monday protest was the main issue at the Conversation. 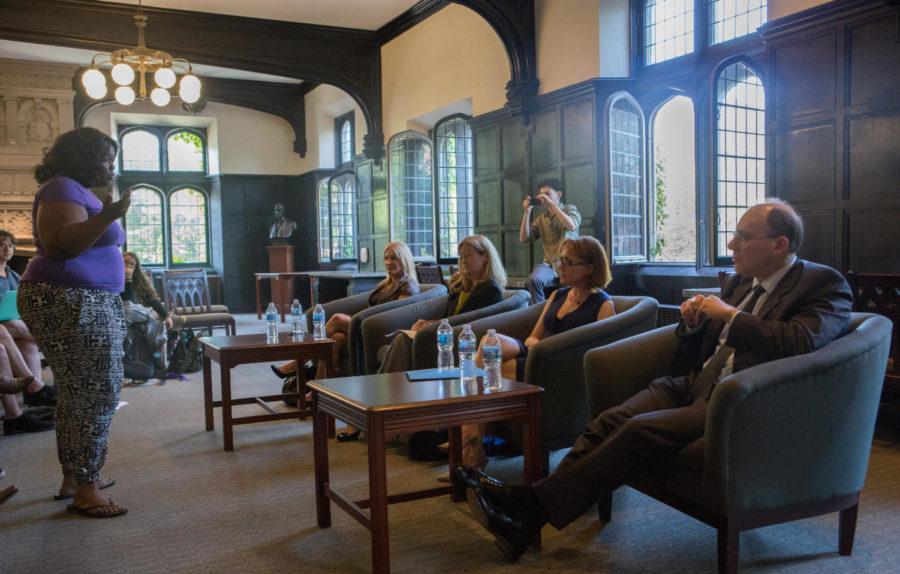 The protest and dissent policy describes how University administrators and University of Chicago Police Department (UCPD) should manage campus protests and demonstrations. After the January 27, 2013 trauma center demonstration which ended in the arrests of four protesters and accusations of misconduct against UCPD, an ad-hoc faculty committee was convened to review the policy and released recommendations in February of this year. The recommendations focused on informing students of demonstration ground rules and maintaining strong communication between administrators and students. The review committee also recommended that police involvement be minimal.

The majority of the event’s audience was composed of trauma center activists.

The panel was composed of Assistant Vice President for Student Life and Associate Dean in the College Eleanor Daugherty, Gerald Ratner Distinguished Service Professor of Law David Strauss, Dean of Students in the University Michele Rasmussen, and Assistant Chief of UCPD Gloria Graham. Each began by giving a short introduction and then proceeded to discuss the purpose of the University’s protest and dissent policy.

Daugherty explained that the University seeks to provide opportunity for students to agree and disagree on campus, and Strauss emphasized that the University’s ultimate goal is to support a community of people who are socially alive and socially aware. Rasmussen also explained that the role of the Dean on Call during times of dissent is to inform the students of the rules of engagement and provide advice to students on the escalations and consequences of their actions.

The event intensified when audience members questioned the University’s decision to physically remove the trauma center protesters from the construction site Monday rather than arrest them, as the protesters expected. Veronica Morris-Moore, a member of Fearless Leading by the Youth, a Woodlawn organization leading the trauma center campaign, stood up to question the panel in what turned into a back-and forth between her and administrators.

“Why did your officers drag me through concrete and gravel rather than arrest me?…UCPD harmed me and that is your policy,” she said, showing them her bruises.

“There was a lot of communication on how to handle the situation. We elected not to arrest, and that was a community decision,” she stated. She also asserted that Morris-Moore was the only one out of her fellow protesters to resist UCPD, sitting back down after she was removed from her lock box instead of walking away from the construction site.

Students continued to question the decision, criticizing what they felt was the panel’s reluctance to reveal specifics of the decision-making process and the UCPD for their actions to removing the protestors from the lock-boxes.

Daugherty said that Executive Vice President for Administration and CFO Nim Chinniah and Vice President for Campus Life and Student Services Karen Warren Coleman were ultimately in charge of the decision to remove rather than arrest the protestors.

“There is no policy that says in each situation do x, y, and z.…Our objective is to mediate, and arrest provides a lot of chaos,” Daugherty said. “We do everything we can to mitigate the situation, but eventually the situation has to be handled, [especially in situations] where there is a place of harm.”

“I think panels like this are an exercise in distraction,” he said. “There is a decision-making process that’s being intentionally obscured to protect the actual decision makers from any sense of accountability.”

Fourth-year SG President and founding SHE member Michael McCown, who planned the event with Daugherty, said he was not surprised by the level of escalation following Monday’s protest. McCown was called to mediate questions between audience members and panelists. After the event, he emphasized the importance of open discourse.

“Students or whoever else have a right to put what they think in language and tone they want to strike and then move on and we did more or less achieve the balance there. I don’t think it’s useful to shut people down when they make things uncomfortable,” he said.

Director of the News Office Jeremy Manier said the panelists found that the discussion was informative.

“[Daugherty said the panelists] were happy to come at the request of Student Government. She said the event allowed them to discuss the reasons why administrators and UCPD officers use discretion to make decisions in protest situations, always pursuing the objective of an amicable outcome. This allows for careful judgment based on the situation at hand, rather than inflexible protocols,” he said in a statement.