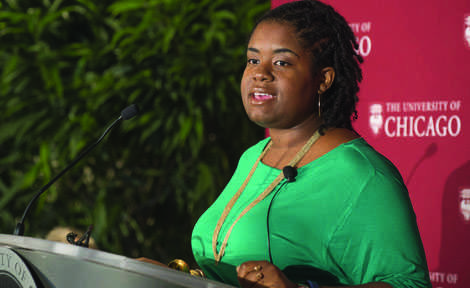 The University announced sweeping changes to its financial aid policy Wednesday, most notably through a new initiative called “No Barriers.” The revisions include eliminating loans, waiving the application fee, and providing additional funding and support for low- and middle-income students.

“No Barriers” will benefit all students applying to the College, and additional initiatives will expand the Odyssey Scholars program. Most of the new initiatives expand the existing UChicago Promise program to the general population. The new programs will take effect beginning with the class of 2019, and were announced at a press conference Wednesday. Current students of the University will not be eligible for any of the new programs. The University estimates that the new programs will include more than half of incoming first years, according to Campus and Student Life News Officer Mary Abowd.

“With UChicago ‘No Barriers’ and our other commitments, we are ensuring that people from all backgrounds and all incomes can afford to attend the University, and that they can thrive and succeed in whatever path they choose,” University President Robert J. Zimmer said at the conference.

The Odyssey Scholars program was established in 2007 to reduce student loans for low- and middle-income College students and will expand under the new initiatives. Most notably, it will now guarantee paid internships or research opportunities for the summer after first year, and it will eliminate work-study for students during the academic year. Changes also include financial support for study abroad and new programming for first-year orientation, as well as leadership and networking.

Many of the changes are modeled after the program UChicago Promise, which was launched in 2012. Aimed at students applying from the city of Chicago, the program eliminated loans in financial aid packages, waived the application fee, established an Admissions Academy for high school counselors to prepare students for the college application process, and added supporting roles within the University to help counsel UChicago Promise students. In addition, the University awards several different full-tuition, merit-based scholarships like the Chicago Public Schools Scholarship, the Chicago Police and Fire Scholarship, and individual scholarships to students from specific high schools. The University also hosts a College Bridge Program, Collegiate Scholars Program, and Upward Bound readiness program.

The total cost of the program will not be known until the full makeup of the Class of 2019 is determined, according to Abowd. In March, the University announced it will spend $112 million on undergraduate financial aid for the 2014–15 school year. In an article published in The New York Times, Dean of the College John W. Boyer said a goal of the $4.5 billion fundraising campaign is to raise $150–$200 million for financial aid.

According to the website College Data, the sticker price of attendance at the University is $64,258 for the 2014–2015 school year. This includes $48,253 in tuition and fees, $14,205 for room and board, and $1,800 for books and supplies. Approximately 60 percent of students receive some kind of financial aid, and currently two-thirds of students with aid graduate debt-free.

At the press conference, Boyer commented on the history of diversity in the University and discussed being a first-generation college student himself.

“This is a place that’s always valued success on its own, not based on who your father or your mother is, or what side of town you were born on, and the new program we’re announcing today, No Barriers, is in some ways bringing to fulfillment these traditions and older patterns of policy of the University,” he said.

Read a follow-up investigation of the University’s financial aid office next week.