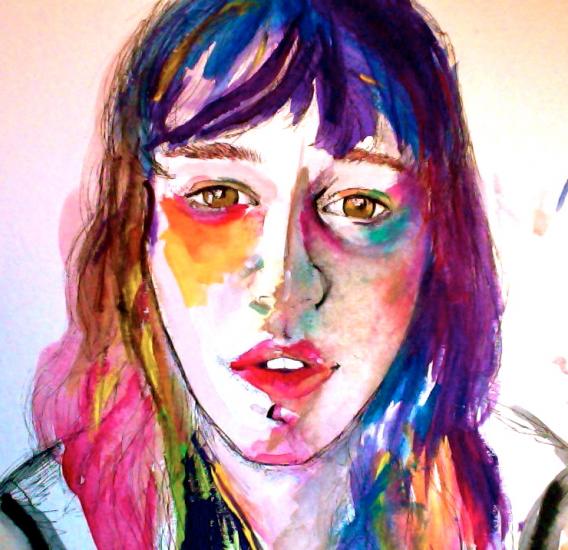 Portraits, comics, chapbooks, nails: Festival of the Arts (FOTA), one of UChicago’s oldest clubs, invaded Hallowed Grounds this past Sunday for a relaxed evening of live music, crafting, and student art showcases at its first-ever arts bazaar study break. Students came early and left late, soaking up the welcoming vibe while marveling at the hidden talents of their peers.

Amid the dimly lit scene of students shooting pool and playing board games around a smoldering fire, five student artists manned stands to display their work and give tutorials.

Allison Torem, a fourth-year majoring in interdisciplinary studies in humanities, set up shop next to her current exhibition of ink and gouache portraits on display through FOTA’s café curating program. She expressed her excitement at having her first booth at a FOTA event and spent the evening attempting to work her way down a lengthy list of live-portrait requests. Students gathered around to witness her transform loose pen strokes into impassioned, seemingly insane faces.

Andrew Oriani, event attendee, described Torem’s portrait of him as “brooding,” explaining, “It doesn’t look much like me, but that’s not really the point. It’s realistic because it captures an essence.”

Torem embarked on her artistic journey when, in eighth grade, she began sketching fellow passengers on the train.   Although she hopes to soon explore the form of the body, Torem currently focuses on face. “Everything is in a face. Faces change in a second,” she said.

Torem hopes to continue painting after graduation. “I’m going to paint for the rest of my life, but not at the expense of me coming to hate it—for it to become work,” she said.

Another fourth-year artist, Valeria Contreras, assisted students in exploring the art of comics. She demonstrated basic technique and showcased her two books: Play Shop and Jamie’s Jungle. Contreras created these educational children’s books to advocate the importance of environmentalism and of the arts, spreading them throughout her community. Self-published, she has sold more than 100 copies of her works.

Her fascination with comics grew out of a childhood tradition of reading the paper with her dad. At the same time, Contreras took an interest in television cartoons, and by high school she was attending comic conventions. She plans to major in international studies with a minor in art.  Contreras sees herself eventually channeling her skills into film and screenwriting.

Fourth-year Ashley Tran added her unusual love of crafting chapbooks to the artsy mix. An English major, she was for the first time participating in a FOTA event. Tran helped students sew together mini notebooks while selling her translucent poetry collection entitled Yellow.

At the culmination of a class on poetry chapbooks, Tran dismissed the option of a final paper and instead chose an alternative assessment—a creative project. Hence the chapbook artist was born. Tran’s art aligns well with her area of study. “I can write poems and put them together,” she said.

Second-year Maya Scheidl impressed curious students with her refined knack for nail art, painting everything from geometric designs to stylized faces and icons. Armed with a tray of every color of polish, Scheidl ran a stand that remained crowded throughout the evening.

Portraitist Wendy Wei also drew onlookers as she masterfully presented the delicate method of sketching with the non-dominant hand—a technique that allows her to focus on facial features themselves rather than the particular accuracy of her drawing.

First-year Caroline Hutton reflected, “It’s cool to see all of the talent that our student body has. If feels like art takes second place to academics, so it’s nice to have a balance.”

Yet FOTA members and attendees alike expressed grievances concerning the limited art opportunities for non-majors and the current role of the arts at the University.

“Here at UChicago, it’s hard to remember that there is more to college than just getting good grades, and that’s why I make time for my art,” Contreras said.

Third-year Xavier Barnes expressed his take on the general student attitude toward the arts: “People don’t think of it as something UChicago does, but it’s there. It’s just not taken advantage of.”

FOTA is changing this mentality. Executive Director Angela Shen plans to make it as easy as possible for students to pursue art in conjunction with their other studies, recognizing that the majority of artists involved in FOTA are non–art majors.

Artists interested in having work displayed in campus cafés should submit to fotasubmission@gmail.com