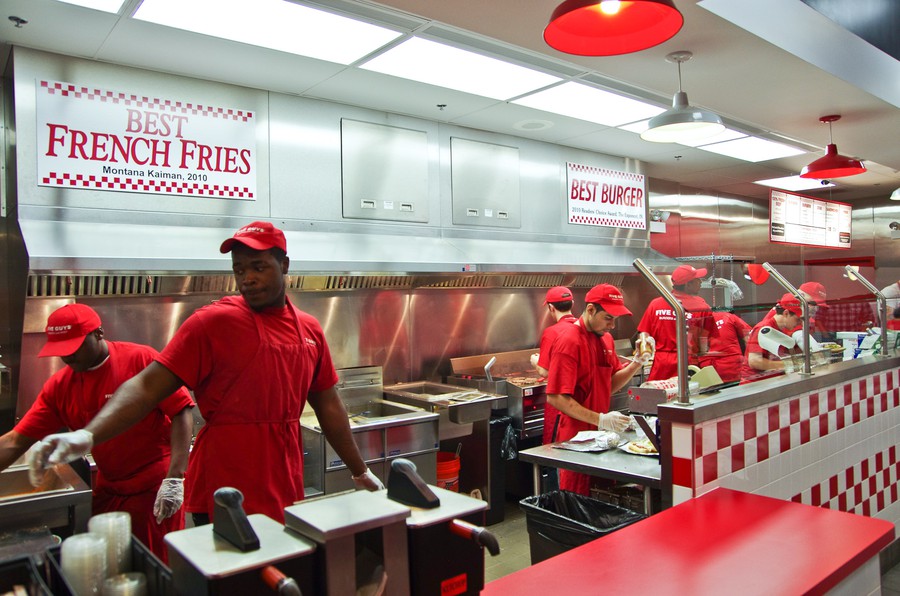 The greasy spoon franchise, which has ballooned to over 750 outlets in 25 years, is known for its towering, double-pattied burgers that can be ordered in over 250,000 equally messy ways—and served up with a damp sack of hand-cut fries or a scoop of unshelled peanuts.

Students have been raving about the new fare, which offers a reprieve from the gauntlet of Thai food restaurants on nearby 55th Street and the local glut of Subway sandwich shops, but many students are even happier about the location.

“Last year, I would drive up to Lincoln Park with friends to the Five Guys there, so having one within walkable distance makes it so much easier to get good food,” fourth-year Belfor Arichavala said. (The walking might have a few added benefits—a typical Five Guys cheeseburger weighs in at 840 calories.) “It could definitely become a hangout kind of place.”

The Five Guys branch is the first in a series of retail outlets proposed by the University to commercialize new buildings in the Harper Court complex. A hotel, movie theater, gym, and 24-hour diner are also scheduled to open in the same area.

“We decided to bring Five Guys to Hyde Park as our inaugural tenant due to their sound business plan and devoted nationwide following,” James Hennessy, the University’s director of commercial real estate, said.

Hennessy said that the 53rd Street commercial corridor is important because of its potential to “improve the quality of life for the South Side of Chicago.” Hennessy added that the University’s mission is to return the area to its days as “a major retail thoroughfare in Hyde Park.”

“Hyde Park is thirsting for dining options, and once other places see the success here, they’ll want to come,” she said. “You used to have to go downtown or to the North Side to get something good to eat, but now we can stay right in the neighborhood.”

“We have received several comments from students and area residents stating that they are pleased with the restaurant, its staff, and its hours,” Hennessy said. “The overall reaction from the community has been extremely positive.”

Vegetarians cowed by the prospect of a new meat mecca in Hyde Park are free to venture inside, provided they are content with double-fisting grilled cheese sandwiches and cups of roasted legumes.