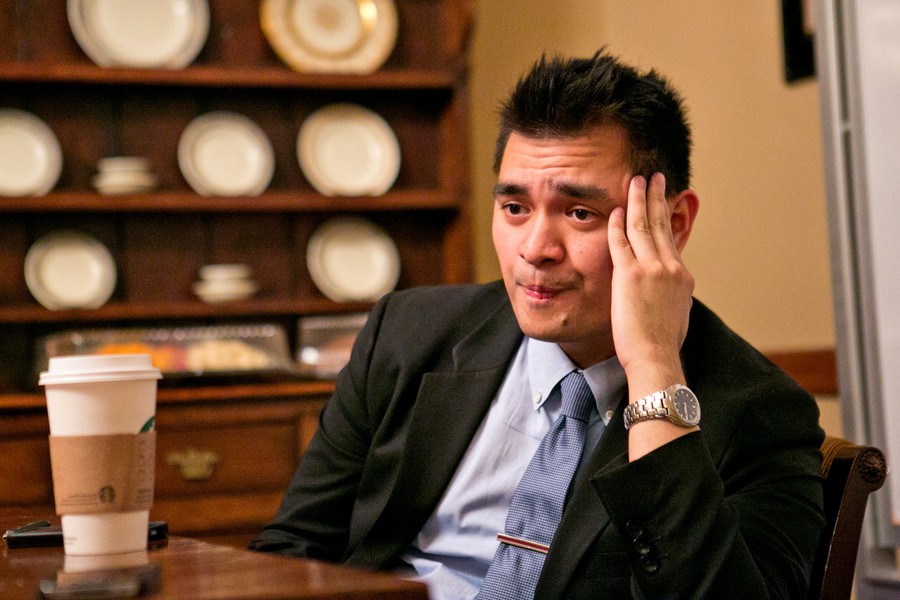 Jose Antonio Vargas is a Pulitzer Prize-winning journalist who has written for The Washington Post, The Huffington Post, The San Francisco Chronicle, and the Philadelphia Daily News. Born in the Philippines, Vargas wrote about his experience as an undocumented immigrant in a June 2011 essay for The New York Times Magazine, a decision that resulted in him getting legal documentation revoked and losing his job. He has since proceeded to found his own organization, Define American, through which he advocates the DREAM Act and other immigration reform.

On May 9, Vargas spoke at I-House about his experiences as an undocumented alien and sat down with the Maroon to talk about being an American, the search for a solution to the immigration problem and coming out as an illegal immigrant.

CM: You wrote in The New York Times Magazine that though you consider yourself American, you are not considered an American by the United States. What would change that for you?

JV: Outside getting my license revoked, I have not been contacted by anyone from any level of government. I saw John Martin in D.C. and we waved at each other and then walked the opposite way. Frankly, I think that’s because my story doesn’t fit the narrative that people have and most of our stories don’t fit that narrative. I was prepared for the Republicans to go after me right away and be like ‘this is why we have to pass E-Verify to protect our borders although my border was the Pacific Ocean. I thought that the government was going to go after me and I actually was preparing myself for getting deported. I prepared my apartment and what was going to happen to my stuff. The fact that they haven’t done anything is just emblematic of how we’re unwilling to face the issue. The question that I’ve been pursuing, and I’m writing about this right now in the essay I’m working on right now, is what exactly is the Jose Antonio Vargas exception. Why am I exempt?

CM: Do you think that being told by the United States government that you’re not an American has done anything to take away your own sense of identity as an American?

JV: Yes it has, but that’s why the name of the campaign is Define American. It was really important. I mean we didn’t even have the word immigrant in there. You can call me whatever you want to call me but as far as I’m concerned I’m an American, so why don’t you define it? That’s why we’re asking people to do that.

CM: What were you looking to accomplish with Define American?

JV: If you’re a millennial American, there are two defining issues for your generation. There are gay rights and there are immigrant rights. What are those things about? American identity. You live with this issue. You went to school with them. You may not know it but you probably know someone. So it’s your job to explain it to the older generation. That’s why it’s important for the media to get involved. I think it’s going to be an issue for the next generation. We can’t keep going the way we’re going.

CM: How have you felt differently about your own identity and immigration since publicly declaring your status as an undocumented immigrant?

JV: I’ve met a lot of people and sometimes it has been a bit overwhelming. Especially that story that I told about the girl who said when she gets nervous, she says, ‘It’s okay, I’m white. I’m white.’ That was one of those things that I literally just had to take a long ass walk after that. That’s the kind of emotions people are going through. I think it has changed me because it made me realize that my decision really was right that I was right in coming out. I was of course sure about it but I was just nervous about it. I’ve been surprised by many things but I’ve been most surprised by hearing all the stories of all the other people who are going through exactly what I went through and somehow surviving. That, I think, is a testament to people’s character.

CM: Are you relieved?

JV: Oh yeah. I think I’ve felt a big relief. I think that happens when you free yourself of anything. Once you stop being afraid of something, you free yourself. I think that’s about anything really, so it’s been liberating because of that, but I’ve also been working. It’s been a very intense 11 months. I’ve just been traveling like a mad man. The irony about this is, I’m traveling more now than I ever traveled as not being publicly undocumented.

CM: Because of your current legal status you can’t really return to a salaried job in journalism, so what are your plans?

JV: So I’m not allowed to be employed but the government has really defined what employment is. So they said I can’t be employed but it doesn’t mean I can’t work for myself. So I’m surviving mostly through independent contractor work. But that’s been the hardest because I was making really good money and I kind of miss not having a salary. It’s okay because as long as I can fit in my clothes, I have all the clothes I want and I need.

CM: Do you plan on continuing your career in journalism?

JV: Absolutely. I’m working on a piece now for a magazine that’s going to run hopefully in the next few weeks. As far as I’m concerned, my journalism career actually just got started. I feel like it just got started and I have to be really good at it.

CM: After all of this, do you still believe that the DREAM Act is the right solution? Is it a comprehensive solution? If not, what really needs to be done?

JV: No it’s not a comprehensive solution, but it’s a solution. I’m for the DREAM Act because what are we going to do with these kids? Anyone getting educated benefits everyone, that’s just the reality, so of course I’m for it. It doesn’t address the full picture because who do you think those kids go home to? For the most part they belong in families where their older brother or mom or dad are undocumented. It’s definitely a good first step. For me, the DREAM Act is a litmus test. The fact that we can’t even pass something as pragmatic like that tells us just how completely divorced we are from reality, how completely nonsensical this issue is that has been in some ways hijacked by the extreme right.

CM: What do you think has precipitated the divorce of immigration from rational solutions, and what do you think will get us back towards solving the issue appropriately?

JV: Again I think it was kind of 9/11. After  9/11 happened...it was welcoming America, and all of a sudden everyone’s a terrorist and everyone’s a stranger. I think that there’s that, but I think also the demographic reality scares a lot of people. For a lot of conservative white people, having more Asian people and Latino people is a threatening thing. I think it has to do with a lack of political courage in our politicians, and elected officials just can’t tell the truth anymore. Look, Dick Lugar just got thrown. Dick Lugar was one of the first co-sponsors of the DREAM Act as a Republican. He supported the DREAM Act and moderate people like him have no place right now in politics.

CM: Do you think there is going to be a return to those moderates?

JV: The center, I mean I don’t want to have to quote Joan Didion, ‘the center will not hold.’ It will just not. Something has to change. If you think about it, this election is actually such a cultural and demographic war. Who are the Republicans relying on for the vote? And who are the Democrats relying on for the vote? I’ve always thought politics was about adding more people to your corner, not subtracting them. If you’re a gay person right now or a poor person or a person of color, you feel much more likely to support Obama because you feel that the Democratic party is not so much attacking your sense of reality and identity as the Republicans are.

CM: Do you think this upcoming election will force comprehensive legislation in any way?

JV: I think there’s going to be a lot of talk. I welcome the fact that Senator Rubio is part of the conversation now. I think that’s great. But I think all of it right now is going to be political theater. All of it right now is undocumented people being thrown around like a football from left to right. We have talked our way through the immigration problem. We know there’s a problem. What we haven’t talked about are the actual solutions. That’s really what should be on the table.