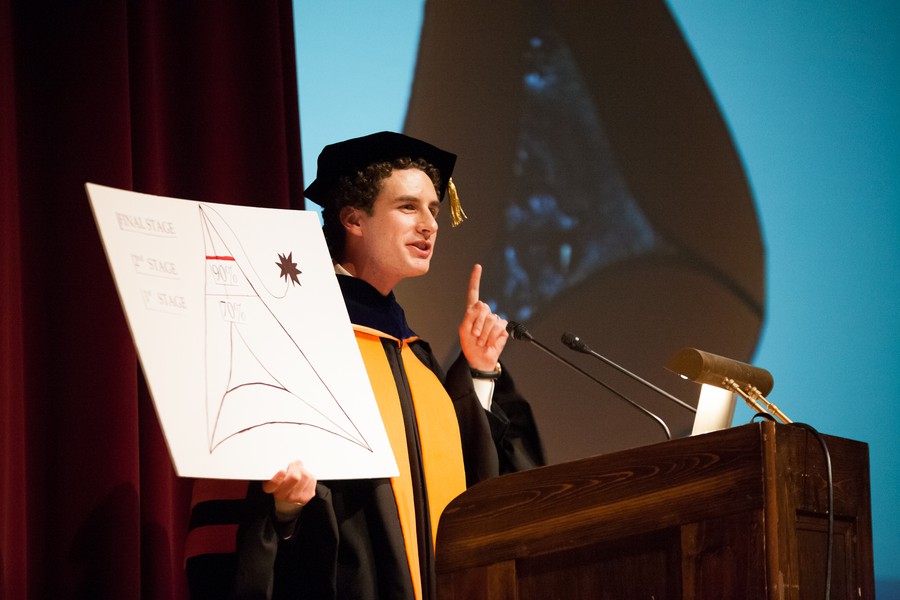 While President Obama presented arguments for his second-term agenda in the annual State of the Union address, faculty members used their expertise in human rights, law, and national security to lay out arguments regarding potato pancakes and triangular cookies in an annual UChicago tradition.

With an audience nearing 900 in number, the 66th Annual Latke-Hamantash Debate attracted a wide array of University and community members to Mandel Hall on Tuesday evening. For the first time in its history, the event was student-run, organized by the Jewish fraternity Alpha Epsilon Pi (AEPi).

Despite the change in management, the debate retained its traditional format. Moderated by philosophy Professor Ted Cohen, himself a latke advocate in 1976, and debated by three faculty members that according to tradition must include a woman and a non-Jew, the event considered the merits of the latke, a round, potato pancake, and the hamantash, a triangular pastry, often with a sweet filling. Each faculty member employed concepts from their respective academic fields in presenting their arguments.

Generally light-hearted, the debate also served as a forum for issues of cultural tension. Among the controversies mentioned were the trauma center protests and Iran’s nuclear potential. Susan Gzesh, Senior Lecturer and Director of the Human Rights Program, read satirical cover letters from students who want “to teach Self, Culture, and Society to earthquake victims in Haiti” and help “AIDS babies,” providing a brief comical outlook on the Human Rights Program.

In an interview following the debate, Cohen said he felt that it went well but only in respect to “how messed up and confusing things have been this year,” referring to the controversy surrounding last spring’s firing of Dan Libenson, former Executive Director of the Newberger Hillel, the debate’s original sponsor.

“There was a kind of a dispute involving various things that had to do with Hillel and the people involved in the debate became unhappy about having themselves sponsored by Hillel…so they said they just wouldn’t do it, partly some of them said that,” Cohen said.

For this reason, it looked as if this year would be the first in 66 years without a Latke-Hamantash debate. But before winter break, AEPi stepped in to sponsor the event, led by third-years Eric Wessan and Eric Rothstein.

Gzesh was the first speaker on Tuesday night. In between pitching the Human Rights Program and highlighting specific humanitarian crises, she argued that the latke affirms universal human rights, while the hamantash embodies cultural relativism, noting that latkes are made from potatoes, which are used in almost every cuisine around the world, while the hamantash’s blend of poppy seeds, eggs, and flour, is particular to the Middle East.

Law School Professor Douglas Baird, the “gentile” of the debate, employed a detailed PowerPoint presentation of Supreme Court cases, Louisiana fishing laws, and Latin phrases like res ipsa loquitur, humorously observing that using Latin can add credibility to an argument. He contended not only that the hamantash is better but that the greasy latke is destined to be regulated out of existence in coming years, given that many foods are already regulated, citing the bans on trans fat and large soft drinks in New York City.

To close the debate, Assistant Economics Professor Glen Weyl advocated for the latke by linking it with population growth in 18th century Europe. He went on to describe the hamantash as a symbol of “white, doughy imperialism”—not to be confused with the purple latke made of Peruvian potatoes that he ate on stage, mid-speech. Weyl concluded his case by arguing, with help from videos of Vice President Joe Biden and Israeli Prime Minister Benjamin Netanyahu, that the Iranians are developing a hamantash-shaped weapon that amounts to the “modern equivalent of the Trojan horse.”

One first-year leaving Mandel Hall enjoyed the debaters’ creative arguments but felt his personal opinion on the matter “trumped everything that happened in the debate.”

“All their arguments were very good, but I inherently like the hamantash better,” he said.

Cohen believes the serious culture at UChicago is well served by the “relief” provided by the debate.

“When you get someone like a very dignified law professor like Doug Baird up there…making a fool of himself, that’s very good. It tends to humanize things,” he said.