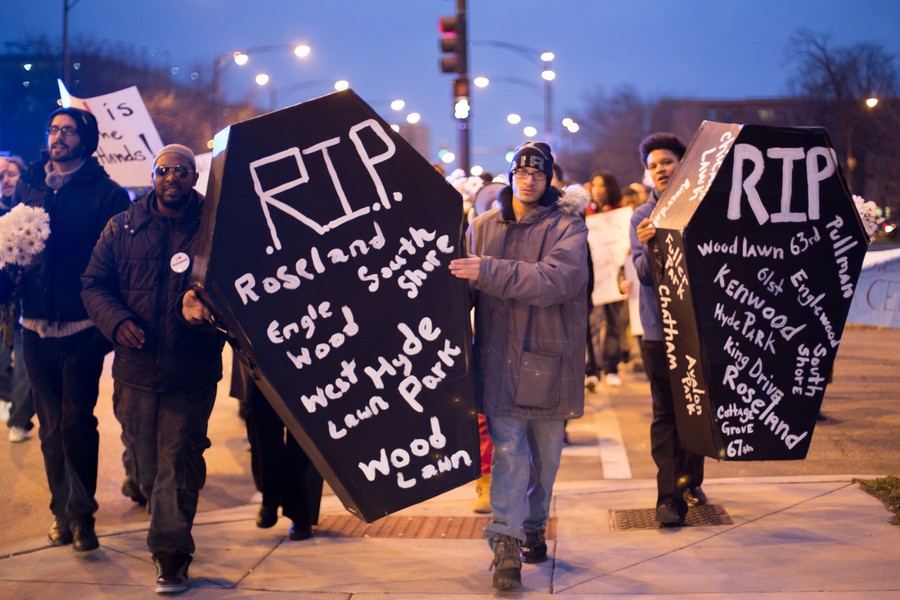 Over 150 community members and UChicago students protested this past Wednesday for the establishment of an adult level-1 trauma center on the South Side. Billed as a “Coffin March Protest,” the event came after a hearing on the same day hosted by state senator Mattie Hunter (D) in response to new research about “trauma deserts.”

The last protest to create a level-1 trauma center was held right after Alumni Weekend this year. Protesters held a demonstration on the quads hoping to gain attention and draw support from alumni.

Wednesday’s protest was organized by the Trauma Center Coalition, a group composed of Fearless Leading by the Youth (FLY), Southside Together Organizing for Power (STOP), Students for Health Equity (SHE), Kenwood Oakland Community Organization, and Reclaiming Inner-City Streets and Elevating Chicago (RISE Chicago). It comes six months after Dean of Pritzker School of Medicine Kenneth Polonsky publicly expressed support for the establishment of a trauma center, according to activists.

The protesters marched along South Cottage Grove Avenue from East 61st Street, accumulating the majority of community members and students on their way to South Maryland Avenue and East 58th Street, where the bulk of the demonstration was staged.

In memory of those that lost their lives without the advantage of a trauma center on the South Side, the demonstrators carried two coffins, each adorned with South Side neighborhood names. Those leading the protest distributed flowers to be placed on the coffin upon the conclusion of the protest.

Several demonstrators took turns speaking to the crowd, encouraging others to keep fighting for those that have lost their lives on the South Side.

“With each protest, we’re getting one step closer. We’re trying to open up more of a dialogue with University,” said Zan Adams, cofounder of RISE Chicago, an organization created to support the efforts of establishing a trauma center.

Adams said he founded RISE two days after his friend was shot and killed on the South Side last May. On May 28, he was able meet with Polonsky. Regarding UCMC’s stance on establishing a level-1 trauma center, he said, “They haven’t been open to the idea at all. They say they don’t have enough money, space, [or] resources.”

The advocates for the trauma center announced Polonsky’s phone number at the protest and encouraged UChicago students and parents to call him.

“U of C needs to take into consideration what their students feel,” said FLY lead organizer Veronica Morris-Moore during the protest.

Hunter’s hearing featured testimony from doctors, community leaders, and UChicago students. According to fourth-year SHE member Patrick Dexter, all of the testimony was in support of the trauma center.

Dexter said that Hunter has agreed to convene a closed-door meeting with representatives from major South Side hospitals, including UCMC, to see what progress can be made with this issue. The date for the meeting has not yet been set.