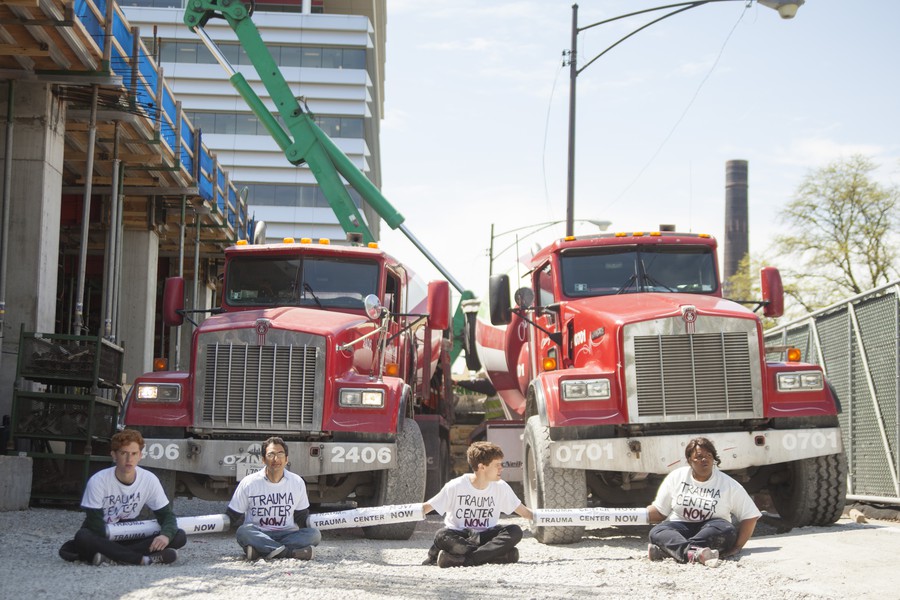 “Today, a handful of protesters entered a closed and fenced construction site where heavy equipment was in active use, posing a significant safety risk to them.  Despite repeatedly offering the protesters alternative locations that are safe and on public property, they chose to remain on the construction site,” University spokesperson Jeremy Manier wrote in a statement in response to yesterday’s protest.

The demonstration began at 9 a.m., when eight protesters barricaded one of the entrances to the construction site. The protesters bound themselves together with lockboxes, made with PVC pipes, carabiners, and bungee cords, and those on the end locked themselves to fences with bicycle U-locks.

“We were prepared to face arrest today for civil disobedience using a mechanism called lockboxes to ensure arrest,” second-year Kayli Horne said. “That is not what happened; instead they forcibly took us from the lockbox.”

After about two hours, half of the original group broke off and entered the construction site through a different entrance, where they sat in the path of two concrete mixers because protesting at their initial location was not disrupting construction as planned. The other half of the group attempted to move further into the site.

The individuals removed from the site were Fearless Leading by the Youth (FLY) members Victoria Crider and Veronica Morris-Moore, second-years Helena Bassett and Horne, third-year Joe Kaplan, first-year math Ph.D. candidate Kevin Casto, and eighth-year SSA student Gregory Morton. Fourth-year Patrick Dexter participated in the initial demonstration but did not enter the site with the other protesters.

Three protesters were injured during the protest. Bassett said she thinks police sprained her left wrist while removing her from the lockbox. “[Police] ended up finally pushing me so far that, I don’t know, I was screaming. I thought my wrist was going to break, and then they just found the spot that holds your wrist in the lockbox and pulled me out of it,” Bassett said. Morris-Moore was taken to the hospital but quickly discharged, and Crider also said she was injured.

Manier said the protest did not dramatically affect construction.

“The demonstration temporarily interfered with work at the construction site, but normal operations resumed after the protesters were removed,” he wrote in a statement.

The protesters also contacted the Illinois State Occupational Safety & Health Administration (OSHA) in an attempt to completely stop construction at the site. Following OSHA guidelines, all present on a construction site must wear hard hats, and the TCC hoped the presence of its protestors would violate this and close the site for the day, according to Kaplan. According to FLY member Emilio Comay del Junco, OSHA did not accept the claim because it did not come from a site employee.

The Monday demonstration was the first event of the TCC’s “Week of Action.” The TCC originally only advertised a “kickoff rally and breakfast” for this morning at a location separate from the protest site as a part of the week’s events. According to Kaplan, part of the inspiration for the week came from an open meeting between trauma care supporters, the campus community and hospital administrators last spring, during which UCMC Executive Vice President for Medical Affairs Kenneth Polonsky said that he was open to collaboration with other hospitals to bring trauma care to the South Side.

Kaplan said that although it appeared to him that those in the hospital administration had “changed their tune,” he hasn’t seen any concrete steps taken toward achieving that goal.

The UCMC released a statement last Thursday emphasizing its interest in providing quality care for the South Side.

UCMC spokesperson Lorna Wong said she had no additional comment in light of yesterday’s protest.