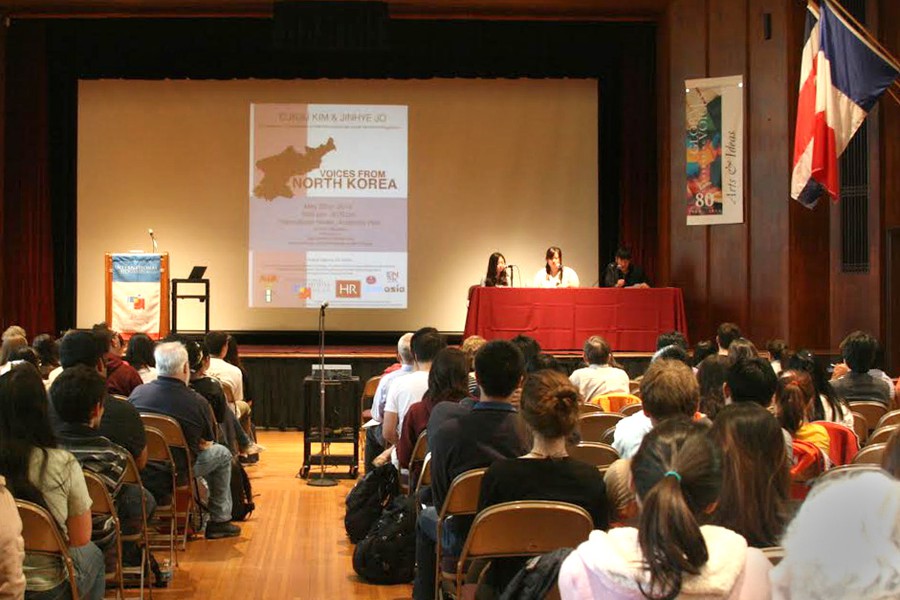 Eunju Kim and Jinhye Jo, two North Korean defectors, discussed their experiences and explained North Korean culture and propaganda at an event last night at the International House as a part of the University’s Global Voices Program.

The event was organized by representatives from Amnesty International, Emancipate North Koreans (ENoK), and PanAsia. Alumnus and organizer Andrew Hong (A.B. ’11) translated for both Kim and Jo, who spoke in Korean.

Eunju Kim suffered through the 1990s famine with her family. In 1997, her father died of malnutrition, and her mother left the house in search of food for over a week. Kim, who was then only 11, starved as she waited.

“I didn’t really fear death, because my dad died, my grandparents died, everyone was dying around me already—the hardest struggle for me was the feeling of being abandoned by my mom,” Kim said.

The concept of death was not new to Kim and other North Korean children. Even in preschool, Kim recalled the school system forcing her and the other children to view public executions.

Since then, she has co-written a book with French journalist Sébastien Falletti about her experiences that roughly translates to An Eleven Year Old’s Will. The book has been translated into Norwegian and Korean from French and will soon be published in English.

Kim’s mother returned after three days, and she, Kim, and Kim’s older sister escaped to China for a brief time, during which a human trafficker took them in and sold them as slaves to a Chinese family. She recalled being relieved that at least she was not starving in China.

In 2005, Kim and her family were caught and forcefully sent back to North Korea. “No one welcomed us, no human dignity was spared for us—we were human trash,” Kim recalled of her return to North Korea.

After two more attempts to escape, Kim and her family relocated to South Korea recently, where they faced difficulties with assimilation but were able to gain freedom. Kim currently lives in South Korea.

Jinhye Jo, a year younger than Kim, escaped from North Korea in 1998 after four failed attempts. She escaped to China, but each time was discovered and forcefully deported back by North Korean authorities. Jo lived in China for a total of ten years. During that time, everything that other children took for granted seemed like inaccessible pleasures to her. She was not able to attend school in China.

“I spent many days crying while looking out the window at students with the privilege of going to and from school,” Jo remembered. “There were times where I felt very bitter, and I thought, why was I born North Korean? Why do I have to die like this? Even if I died, would anyone care?” she said.

Both women related their experiences of growing up in a culture of propaganda in North Korea. Information about the rest of the world is closed off, and the Internet is inaccessible to most of the population. According to Kim, there are only one to two computers in a typical school, used not for the Internet or research but for typing practice.

She also said that a typical elementary school math textbook would contain questions such as, “If there are 11 apples, and the Americans stole five while the South Koreans stole three, how many apples are left?” and a typical history book often contained pictures of South Koreans polishing the shoes of Americans, to “teach the kids that the South Koreans were slaves to the imperialists,” Kim said.

Another aspect of North Korean life is the lack of medical care. “In written words, there is ‘Free Medicare’, but this is not really true,” explained Jo. “When you contract a disease, you have to pay the doctor in gifts, such as wine or cigarettes, to get treatment. And once you get a prescription, the government doesn’t provide the medicine—you have to search for medication on a sort of black market,” Jo said.

According to Kim, the black market is composed mostly of expired medicine from China, and so “even if anyone had the money, he couldn’t buy health,” Kim said.

Jo expressed confidence in eventual reunification of North and South Korea. “Unification [of Korea] is going to come soon, whether it’s in the way we expect it or not,” Jo said.

Fourth-year David Tian, who helped organized the event, said that he hoped it would shed light on the state of the North Korean people.

“Sometimes North Korea is immediately associated with being a belligerent state —nuclear weapons, unpredictable leaders—I’m hoping this event can help people put a face to North Korea, and raise awareness that people are hurting, hiding, and need support,” Tian said.