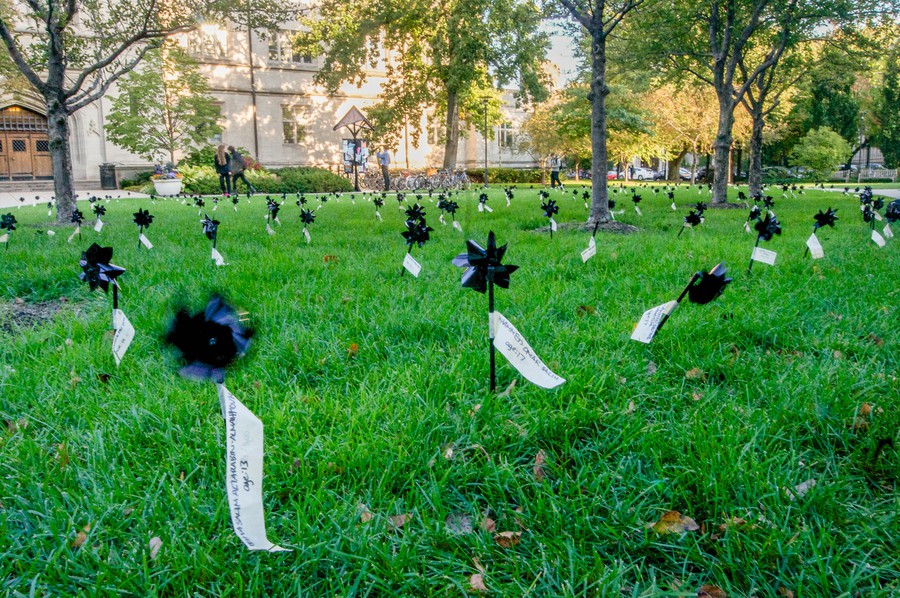 During the height of the Israeli-Palestinian conflict this summer, Palestinian-American Steven Salaita prepared to begin his new job as a tenured professor at the University of Illinois Urbana-Champaign (UIUC). Some of Salaita’s academic work focuses on the connection between Native American and Palestinian colonial struggles, and over the summer Salaita regularly tweeted pro-Palestinian statements from his Twitter account. A few weeks before classes started UIUC chancellor Phyllis Wise rescinded Salaita’s job offer, prompting student and faculty protests on campus to reinstate Salaita. Hosted by Students for Justice in Palestine, Salaita will speak at International House tonight as part of a Chicago-wide speaking tour.

Chicago Maroon (CM): What led you to begin tweeting about Palestine? As a scholar and writer, how do you view the use of social media as a mode of communication for one’s intellectual ideas versus personal beliefs?

Steven Salaita (SM): Ever since I started actively using this Twitter account, it’s mostly been about Palestine. The medium is really active with a large community of folks who focus on Palestine, so Twitter became a source for me to find interesting articles, interesting viewpoints, interesting takes. Once I started getting more adventurous in the medium it was Palestine I was mostly attracted to, which is mostly a function of my personal passion.

I don’t see Twitter activity and my scholarship as connected. I see it something as separate from teaching and research, on own time. It’s a way to interact with wide range of people on an interesting but frustrating platform. I tend to not use the Internet at all when it comes to other stuff that I use for class, so I don’t really think they have anything to do with one another.

CM: How do you interpret the “grey space” between personal and public that Twitter occupies? For example, for some writers Twitter is a professional platform. Why is it frustrating?

SS: There are some folks who become well known because of Twitter, so I know what you’re getting at there. I look at Twitter as a performance. [140 characters] is enough to put a link to an article…it seems to rely on a type of communication among users that puts a premium on shared assumption, because you don’t have the space or the ability to explain in detail what you’re getting at. So me and my followers, our assumption is that Gaza is under an occupation…but personally I never looked at Twitter as the primary vehicle of engagement with the world. That’s something I tried to do in my scholarship and longform essays, but one thing this situation has done, it’s made a lot of my personal political points of view public.

CM: In your Tribune op-ed, titled “U. of I. destroyed my career,” you frame this as an intensely personal affront to your individual life and livelihood, even though this seems at first glance like a political narrative. Why did you choose to do that in that particular op-ed? How do you make choices about framing your story across contexts?

SS: Mostly I wanted to give readers a sense that these sorts of positions coming from universities do have intensely personal consequences. The university’s decision did cause harm to me and my family, not only in my career prospects, but in my ability to have a livelihood. I agree that it’s intensely political. We have a situation wherein the intensely political situation had serious personal consequences. There are so many issues that intersect with my situation. It’s feasible depending on context to discuss as intensely political or intensely personal. Lots of people are discussing this as symbolic of the corporate university, the relative weakness of Palestinians vis-à-vis Israelis in public discourse. That’s why it’s being talked about in so many ways, including by me. We’re trying to account for all different kinds of consequences and the bearings those have on our identities across contexts.

CM: Recently the MIT professor Noel Jackson was arrested and institutionalized by his employer for tweeting. Do you think your case is specific to Israel/Palestine discourse, or is institutional restriction on free speech a national issue?

SS: I think that the kind of tightening of the range of speech of the professoriate is a general problem. [University of] Kansas doesn’t allow professors to use social media, but if they do and [their tweets] are deemed to be [inappropriate], they can be held “accountable,” meaning fired. But the Israel-Palestine conflict is a particularly fertile area of this type of repression. First, because it’s so controversial, second because Israel supporters in the U.S. are so active in silencing Palestinian voices. It makes it an easier target to take it out of context, misrepresent it, and tell our employers. There is a larger pattern of this in academic freedom, with Israel-Palestine as the most active stage. In the past year or two, you can see how many academics have been punished for speaking on behalf of Palestinian human rights.

CM: In your case, there was a direct link between wealthy donors and your offer for a tenured professorship being rescinded. Do you think your case is a micro-example of a struggle for power within universities that’s being played out across contexts?

SS: You said it better than I could’ve. That’s one way it’s been symbolic and generated such interest. This tension has existed between employees and university management and administration, and a lot of the time corporate interests are at the expense of academic freedom, at the expense of students and faculty raising questions about the way our government is run and the conduct of administrators themselves, and you see this play out in the reactions to my situation.

CM: Has media attention over the controversy changed your opinion about your career being over? What’s next for you?

SS: Right now I’m just taking advantage of the opportunities I have to go around and give talks about my scholarship, my situation, and academic freedom. I don’t even know, I’m just taking it one day at a time.