Reg Exhibit an Homage to Yiddish Culture in Chicago 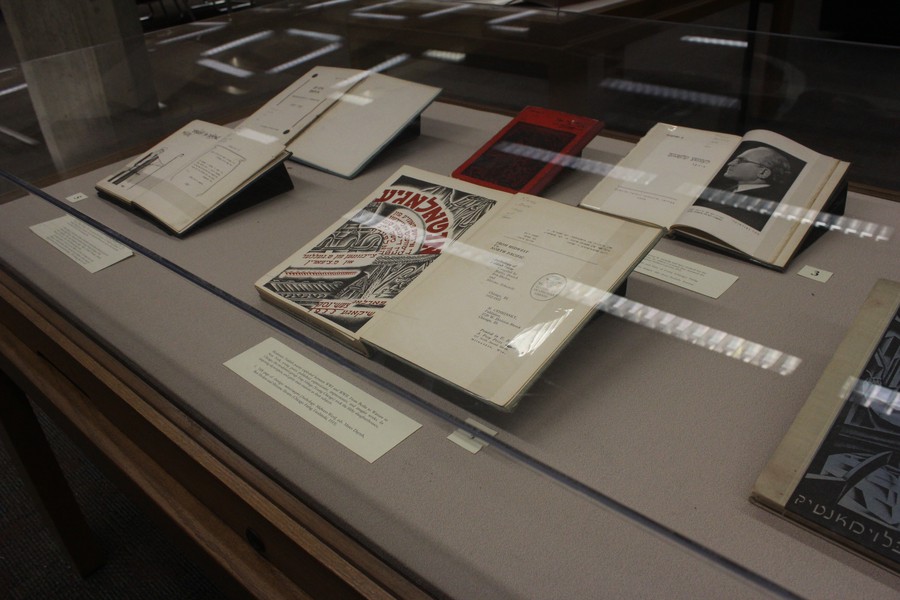 When people think of American hubs of Yiddish culture, New York City tends to come to mind. In reality, however, Yiddish art, literature, and theater thrive in cities all over the country. Chicago, for example, houses an established, modernist Yiddish theater scene as well as numerous publishing houses.

The display is the brainchild of Sunny Yudkoff, Ph.D., a senior lecturer in Yiddish at the University. She explained that the idea to showcase some of the library’s Yiddish collection occurred to her one day while she was teaching third-quarter Elementary Yiddish.

“I decided to focus our weekly conversation sections on the history of Yiddish culture in Chicago and soon learned that the library had an amazing collection of illustrated Yiddish texts that were published in Chicago,” she said. “As part of the course, students examined a number of books in the library’s collection and also presented oral reports on individual writers who lived, worked, or were published in Chicago. The exhibition was an opportunity to introduce this lesser-known moment in Yiddish literary history to the wider University of Chicago community.”

According to Yudkoff, the books featured in the three display cases include literary criticism, modernist poetry, philosophical treatises, and yizker-bikher—books commemorating Eastern European Jewish communities that were destroyed during WWII.

“The books featured in the exhibition also boast a variety of intricate illustrations, broadcasting the artistic sensibilities of the writers and publishers,” she added. “The books that were chosen for the exhibition represent a small range of the texts published in Chicago.”

These texts are also just a fraction of the UChicago library system’s immense collection of Yiddish texts. The library’s collection is estimated to be around 6,000 volumes, according to Anne Knafl, a UChicago librarian specializing in Jewish studies, philosophy, and religion.

The library’s collection “includes all formats, such as print monographs and journals, microforms and electronic resources, as well as polyglot works written in multiple languages, such as Yiddish and English together,” Knafl said. She added that about one quarter of the works were published in the United States and that the rest were published in Europe (primarily Eastern Europe) or Israel. “In addition, we hold titles published in Australia, Buenos Aires, and Canada,” she said.

The library also boasts a number of extremely rare Yiddish texts, including a 1904 biography of Theodor Herzl published by Sholem Aleichem and a first edition collection of wood engravings by Chicago artist Todros Geller, published in 1937 and signed by the author. However, the oldest Yiddish material in the Reg’s collection is a polyglot Bible that includes a Yiddish translation of the Old Testament and printed with Roman letters so that it could be read by those not literate in Hebrew.

The texts included in the display cases may be just a small portion of the library’s selection of Yiddish texts, but as Yudkoff pointed out, many of the volumes in circulation feature inscriptions from various authors and poets to their readers.

“These are particularly exciting to feature in the exhibition as they shed light on the relationships between writers, readers, and their literary circles,” Yudkoff explained.

Yiddish in Chicago: A History of Publishing is not only an opportunity for members of the UChicago community to learn more about both pre- and post-war Yiddish culture, but is also a particularly poignant homage to Yiddish life in our own backyard.