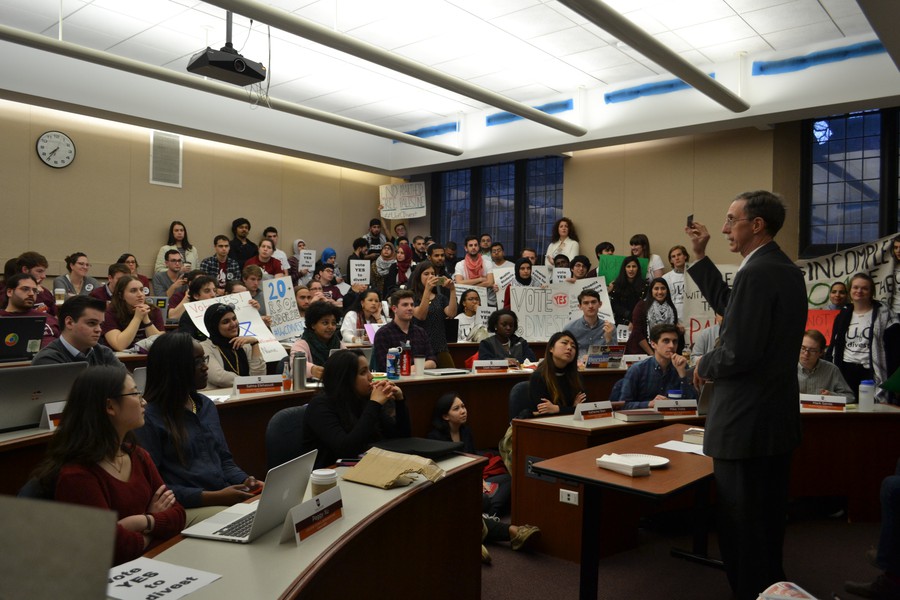 College Council (CC) approved a resolution last night calling on the University of Chicago to divest from 10 companies that the resolution’s proponents say enable Israeli human rights abuses in Palestine.

The vote—eight yes, four no, and three abstaining—was preceded by a contentious debate and procedural wrangling. The packed room in Stuart was divided between supporters of the resolution, who held Palestinian flags and signs advertising RSO endorsements, and opponents, many of whom wore T-shirts that read “yes to peace, no to divest, no to BDS [boycott, divestment, and sanctions].”

The debate followed an anticlimactic presentation and question-and-answer session with Dean of the College John Boyer and Dean of Students in the University Michele Rasmussen on College Housing, sexual violence prevention, study abroad, and the Core Curriculum. Referring to the decked-out and impassioned crowd, Boyer suggested that vigorous and responsible debate was a testament to the distinctive strengths of the College’s students.

After the deans departed, debate began on the resolution. It had been amended since being introduced at last week’s CC meeting to include a condemnation of anti-Semitism and an assertion of neutrality on any eventual political settlement between Israel and Palestine.

Opponents of the resolution suggested at different points in the debate that the opposition had not had sufficient time to state its case and that the resolution exceeded CC’s mandate. Last week, proponents of the resolution introduced it during a 15-minute presentation that preceded a three-hour CC meeting largely focused on the issue. This week’s meeting restricted debate participation to CC members rather than allowing an open-floor discussion.

Resolution supporters on CC insisted that the group was, per its bylaws, “the legitimate voice of the student body,” and had a moral obligation to express the will of the students on the issue.

During the debate, second-year representative Michael Meng turned his time over to a Palestinian classmate who spoke in support of the resolution.

She responded to previous suggestions that the resolution unfairly singled out Israel among human rights abusers. The resolution, she said, reacted to calls from Palestinian organizations, the likes of which have not been seen in other countries.

“My people are dying every day. Apartheid is real,” she said.

After the 10 minutes of debate accounted for on the meeting agenda had passed, several amendments to the resolution were proposed and discussed. The first amendment, which would have included a clause supporting the right of self-determination for the Jewish people and the continued existence of Israel, was voted down with four in favor, six against, and five abstaining.

Opponents of the amendment pointed out that it seemed to take a stance on the final political settlement in the region, which the resolution had previously been amended to avoid. Second-year CC representative Cosmo Albrecht suggested that because the definition of the state of Israel and its borders was not specified, the amendment added no value to the resolution.

A second amendment would have eliminated references to the BDS movement, which is mentioned five times in the resolution. Mike Viola, a fourth-year representative, said he was sympathetic to divestment but reluctant to support other elements of the BDS movement, especially boycotts of Israeli academics.

Clark Halpern, another fourth-year representative, said in response that the connection to BDS was, in his understanding, central to the the resolution. “Tying this to BDS is why this movement exists in the first place,” Halpern said.

Cottrell then moved to table the resolution, but only Viola voted with him in support of the motion (nine representatives voted against it, and three abstained). After the tabling motion and the amended resolution failed, CC returned to the original, unamended resolution.

The resolution passed to deafening cheers from the pro-divestment portion of the crowd. Supporters chanted “Free, free, Palestine,” as they left the room.

“We will continue to stand against BDS and the rejection of the existence of a Jewish state. This resolution is not the end of our work, but merely one setback in part of a long and difficult road toward peace,” the statement said in part.

J Street UChicago expressed disappointment in a statement released on its Facebook page the morning after the vote.

"This resolution, as part of the global BDS movement, fails to explicitly support Israel's right to exist, and therefore fails to promote a peaceful and just solution to a conflict that continues to cause so much suffering," the statement said in part.

Before the resolution debate began, second-year Asya Akca, Student Government’s co-director of communications, had announced that recordings “of any kind” would not be allowed. This stirred controversy at several points throughout the meeting.

At one point, a student spoke up to say she felt unsafe due to photographs that were being taken of the proceedings. Akca clarified that the ban on recordings applied to both audio recordings and photographs, and said she would approach anyone who had taken photographs during the debate to ensure that they were deleted after the meeting.

CC Chair and second-year Eric Holmberg said that Center for Leadership and Involvement advisors had informed him and other members of CC that there was no obligation for CC to allow audio recordings, and that for the safety of audience members, CC decided to prohibit audio recording at the meeting.

Later in the meeting, Albrecht called for a point of order to acknowledge that the SG secretary had left the room and to ask who was taking minutes of the proceedings. Holmberg responded that in accordance with past CC meetings, he had been digitally recording the meeting since the secretary left, which prompted complaints from the crowd and from Cottrell, who said he did not want to be recorded.

Holmberg said the recording would be sent only to the secretary, who would produce minutes for the meeting as if she had been there in person, and the recording would then be erased. When Albrecht suggested that another student present could take the minutes, Holmberg stopped his recording and Akca announced that she would personally ensure that the recording was privately transferred and then deleted.

CC representatives were available to comment after the meeting was adjourned.

“I’ll continue to stand behind the Jewish and Israeli right to self-determination, however I do believe that divesting from companies that perpetuate human rights abuses in the region is something that College Council had to stand behind and in fact it did, and I hope this sends a message to the administration that we as students do not want to be complicit in human rights violations,” Albrecht said.

Sands was cautious in his response. “Obviously the largest turnout we’ve ever had. I’d prefer not to comment on the specifics of individual resolutions there. I was happy with the level of decorum throughout,” he said.

Cottrell said that proponents of the resolution, whose reasoning he suggested had been “hypocritical” and “illogical,” would be accountable to their constituents for their votes. In the meantime, Cottrell suggested that CC try to move past the controversy and take up other business.

“I know this has been very divisive, but we have important work to get to, and I hope people will focus on the real issues when we continue,” he said.

Editor's note: This article was updated on April 13 to include J Street UChicago's response.

Editor's note: This article was updated on April 16 to note the vote of each representative on the final divestment vote.