Yates advocated for people to continue to pursue careers in public service, drawing a distinction between public service work generally and work that serves a particular administration. 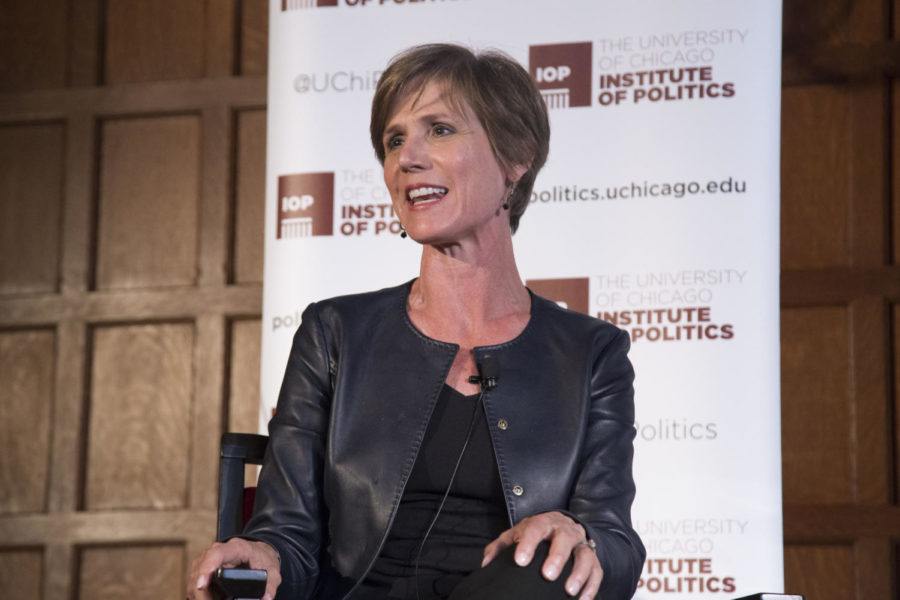 the Institute of Politics

NPR Justice Correspondent Carrie Johnson moderated the event, asking about the decision to not carry out Executive Order 13769, which would have barred people from seven Muslim-majority countries from entering the U.S.

“While I was fired because of my decision to not follow the President’s order, if I had the opportunity to change any of the decisions I made, I would not change anything I did,” Yates said.

Yates recalled that Trump signed the travel ban on a Friday afternoon. The ban prevented lawful permanent residents and visa holders as well as the non-citizens of seven Muslim-majority countries from entering the U.S.

“I thought that it was unconstitutional and unlawful, and I felt that the Department of Justice shouldn’t do something unconstitutional like that,” Yates said. She was later dismissed by the Trump administration.

Although she was upset about being fired, Yates expressed more surprise toward Trump’s constant attacks on major democratic institutions. “Issues about the rule of law, courts, and press are bipartisan issues, and I find the attack on these institutions [to be] particularly disturbing,” Yates said.

Yates elaborated that institutions like the courts are not self-sustaining and require the efforts of the entire nation to stay intact, and she believes that undermining these institutions can have consequences. “A president is supposed to be protecting the rule of law and the constitution, but his tweets and actions so far—like attacking federal courts—seem to imply otherwise,” Yates said.

She later argued that democracies accept and even encourage disagreements with judges on certain issues, but belittling and undermining a court cannot be defensible.

Johnson asked Yates if it is worthwhile to pursue a career in public service under the current administration, even if it does not represent one’s beliefs and core values.

“While I might advise against going for a Cabinet position,” Yates joked, “…we need dedicated people in public service serving as the foundation of a well-functioning government.” She argued that public service and serving a particular administration are two completely different areas, and people working outside the government can often have a greater impact on the nation.

“If we can have dedicated people going into public service, we will feel that impact much more strongly that the Trump administration will have,” Yates said.

Toward the end of the event, Johnson asked Yates if she would run for office in the near future. Yates responded that while she is passionate for public service, she has no interest in running for office.

“What I really missed under the Obama administration was being a lawyer,” she said. “I want to get back to being a lawyer but I also want to work on criminal justice issues that currently affect our country.”