The Facebook page UChicago for Fair Tuition began circulating the petition after the announcement that spring quarter classes would be online. 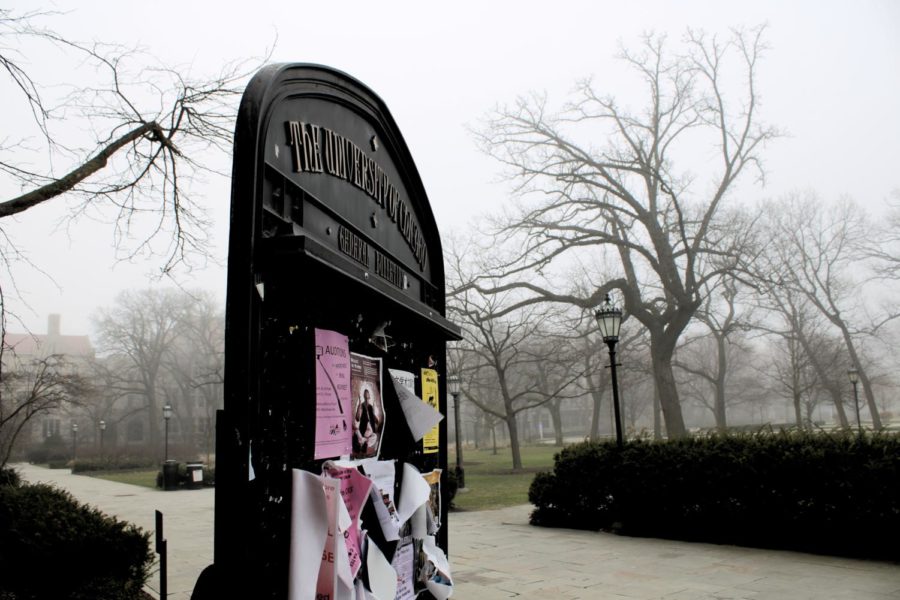 A bulletin board outside of Cobb Hall, on a misty day during spring break 2020, after many students had already left campus.

At the end of March, a Facebook page for a student-run group called UChicago for Fair Tuition (UCFT) began circulating a petition online that laid out a set of demands including halving tuition and calling for students not to pay their tuition fees until those demands were met. As of April 16, the petition had accumulated nearly 1,700 signatures, according to fourth-year organizer Julia Attie.

As the April 29 deadline to pay tuition approaches, UCFT continues to organize student support for its five demands: reducing tuition by 50 percent, waiving advanced residency tuition for doctoral students (fees charged for Ph.D. candidates working on their dissertations after their fourth year of study), reinstating the possibility of going on part-time status for students, instituting a tuition freeze, and publicly releasing the University budget.

While UCFT came together after the announcement that spring quarter classes would be conducted remotely, many of its organizers were already members of Fair Budget UChicago, a project of student advocacy group UChicago Student Action. Fair Budget UChicago has, for years, pushed for budget transparency and related issues such as raising the campus minimum wage, investing in mental health services, and supporting graduate student unionization.

“I think the biggest overlap between Fair Budget and the tuition campaign is that both have this budgetary analysis where we know how much money the University has and we know the ways that transparency figures into our demands,” said second-year UCFT organizer Livia Miller. “We’re carrying that same sense [that] what the University chooses to put money into is a list of priorities, and we’re asking them to prioritize individual people’s well-being and financial situations.”

UCFT argues that the economic fallout from COVID-19 will force many students and their families into a state of financial crisis, as unemployment rates rise and non-essential businesses are forced to shut their doors. According to Miller and other organizers, the University has a responsibility to support students by reducing their financial distress. Less central to their demands but a complaint frequently heard among the student body, UCFT also claims that the experience of in-person instruction and classroom interaction, along with the academic resources available on campus, can’t be replicated in a distance learning format, and therefore distance learning doesn’t justify charging full tuition.

An early statement from the University provided to UCFT said that all distance-learning classes count the same toward degree completion as those held in person, which is why the University is charging the same tuition rates despite the disruption of transitioning online.

Low-income students and their families have been especially affected by campus closure and growing economic instability, as have international students from countries whose currencies may become devalued faster than the dollar.

Additionally, graduate students, many of whom have significant student loans and already occupy a precarious financial position, will also suffer in a recession—especially those who have families of their own to support.

“Since my partner has lost his job due to COVID, I am now the primary provider for our family,” Carly Murray, a graduate student in the School of Social Service Administration, wrote in a testimonial provided to The Maroon. “UChicago continuing to charge full tuition is forcing me to decide between my education and being able to buy groceries or pay my rent.”

The University has taken a number of steps to mitigate the financial impact of COVID-19 on students, including guaranteeing six weeks of pay for hourly workers unable to work remotely and implementing a tuition freeze for the 2020–21 academic year.

In an email sent to the campus community on April 7, President Robert Zimmer reiterated the University’s commitment to meeting students’ “demonstrated [financial] need” despite budget cutbacks in other areas, and noted that all officers of the University would be personally contributing to the Odyssey Scholarship program.

However, Miller said that financial aid might not be able to account for recent changes in families’ situations as job losses continue, and that emergency measures and special circumstances appeals to adjust individual families’ contributions to tuition may not be able to keep up.

“Financial aid isn’t sufficient because of how unstable a lot of things are right now,” Miller said. “Financial aid is calculated based on tax returns from two years previously, which means in situations where one or both parents have lost their income…financial aid won’t change to reflect that until 2021.”

The size of the University’s approximately $8.5 billion endowment, and the fact that it raised $5.4 billion in the recent Inquiry and Impact fundraising campaign, are key to UCFT’s argument that tuition could be lowered with little damage to the University’s overall finances. At the moment, it’s unclear how the endowment, whose growth is linked to the stock market, might be adversely affected by a recession. While acknowledging that reduced tuition would certainly be a loss to the University, Miller claimed the University could absorb that loss far more easily than individual families.

University spokesperson Gerald McSwiggan said in a statement responding to these claims that endowment funds, including those added by the Inquiry and Impact campaign, are legally restricted to certain purposes and generally can’t be tapped for other needs. Funds that haven’t already been earmarked for immediately supporting financial aid therefore can’t be relied on to offset lost tuition revenue.

“The University’s endowment and fundraising campaigns rely heavily on gifts that support education and research at the University in perpetuity,” McSwiggan wrote in the statement. “Annual payout from the endowment enables the University to address priorities over the long term, including comprehensive financial aid for students, rather than using principal for the current budget at the expense of future students and faculty.”

Under ordinary circumstances, students who can’t pay tuition on time are subject to having holds placed on their pre-registration and graduation, and might be charged late fees. However, if late fees have been eliminated for spring quarter, more students might find it feasible to withhold tuition. Miller pointed out that although the number of students likely to strike is unprecedented, students frequently pay tuition late for a variety of reasons during the course of non-pandemic school years as well.

“We have no way of knowing what’s going to happen, given [that] a lot of students are going to be striking, but a lot of people are late on tuition for all kinds of reasons,” Miller said. “It’s unlikely there is going to be any new punitive action.”

While it’s unclear what actions the University might take should a tuition strike occur, UCFT suggests that there may be some safety in numbers. Over 400 students have committed to strike while close to 560 are considering it, according to UCFT, and organizers plan to reach out to those still on the fence in order to persuade them to commit.

National media coverage of UCFT and similar movements nationwide could also apply pressure to the University to engage with their demands. Articles in media outlets such as Inside Higher Ed, The New York Times, the Chicago Sun-Times, and others have drawn attention to UCFT’s campaign and the efforts of college students nationwide to secure reduced tuition.

A petition by students at the University of Illinois at Chicago (UIC) demanding their administration reimburse the difference in cost between in-person and online education has racked up over 8,000 signatures. Students at the New School in New York City are also conducting a “digital strike” demanding a partial tuition refund. Miller said UCFT had been in touch with student organizers at Northwestern, DePaul, and New York University as well as UIC, and was still contemplating a “coordinated national action.

Ultimately, UCFT hopes a tuition strike will compel administrators to engage with students in discussions surrounding tuition and the University budget.“What we’re really looking for is a seat at the table, and a willingness to be part of the conversation about the financial policies both now and moving forward,” Miller said. “We see the tuition strike as escalation, but also as just a tool in developing a relationship with administration that takes into account student voices.”

Provost Ka Yee Lee sent an email to the student body Tuesday morning addressing “common questions” raised by students regarding tuition. While the email did not mention UCFT by name, it responded to several of their claims about the impact reducing tuition would have on University finances.

“Tuition is an essential source of funding for the University’s ongoing operations, including support for financial aid as well as faculty and staff salaries,” Lee wrote. “Reducing tuition for students regardless of their financial means would require substantial cutbacks in operations.”

Lee reaffirmed that the University is committed to meeting students’ “full demonstrated financial need” for domestic undergraduates and that financial aid options would be available to graduate students (the email did not mention options available for international students). Lee also mentioned the bursar’s office’s emergency assistance fund as a resource for students in need, although the fund is designed to assist with emergencies not related to tuition or the cost of attending the University.

Lee’s email complicates the question of late fees for tuition payment. While an email from the bursar’s office to a UCFT organizer stated that the office would not assess late fees, Lee’s email stated that students who don’t qualify for a payment extension will be subject to the same penalties as they would under ordinary circumstances.

“The email from Provost Lee provides absolutely no new financial support,” wrote UCFT in a statement provided to The Maroon. “The University cannot claim it meets the ‘full demonstrated need’ of students during this crisis; the fact that they have instituted a new financial hardship appeal form because so many students are struggling just shows that current financial aid packages are not sufficient.”

The entirety of UCFT's statement can be read here.

Update 04/21/2020 at 11:58 am: This article was updated to include information on the email sent by Provost Ka Yee Lee on Tuesday morning and comment from UCFT in response.