Fourth-year swim captain Nadia Redza, a member of the Malaysian national team, has set a standard for athletic leadership with her team-oriented approach. 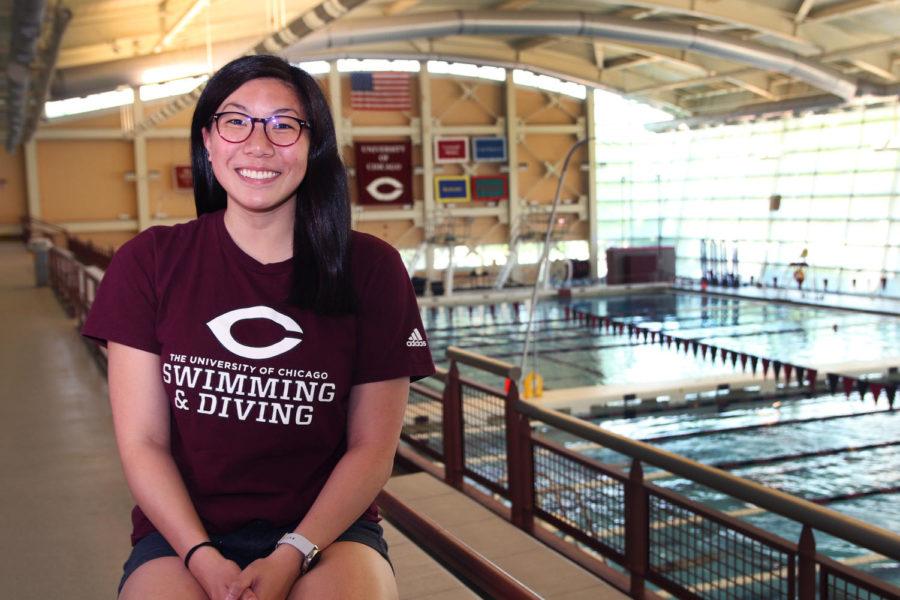 Nadia Redza competed not only for UChicago, but internationally as well.

Before Nadia Redza even set foot on the UChicago campus in the fall of 2017, she already had an enviable athletic résumé. A member of Malaysia’s national swim team since the age of 14, she has competed in locations like Azerbaijan and Samoa to represent her country.

Since Redza joined the UChicago women’s swimming and diving team, she has leveraged those experiences to become a leader in and out of the pool.

“I came into college with relatively good technique just from being at such a high level back home, and I think that helped me a lot because I’m able to help other people fix their strokes as well,” Redza, now a fourth-year, said.

The decision to swim wasn’t entirely of Redza’s own volition. Her first experiences in the pool came at the behest of her parents, who wanted her to learn swimming as a basic life skill. Redza’s older sister, Diana, is also a swimmer, and Nadia wanted to follow her lead.

The younger Redza added gymnastics, track and field, and dance to her list of activities when she moved to Beijing, but upon returning to Malaysia in fifth grade she fully concentrated on swimming. In 2013, at the age of 14, Redza was tapped for the Malaysian national team after competing in the 16th Sukma Games.

Most athletes would be around 18 to 20 years old when chosen for the Malaysian national team, but Redza, who has also represented her home state of Selangor, bucked that trend.

“My year, when I first swam at those games, was the first year they took younger athletes, so I was almost like a pilot program in a sense,” Redza said. She noted that it was a decision partially fueled by low numbers, for several of the older swimmers and divers were retiring from competition. Since then, many young athletes have been drafted at 15 or 16 years old.

Naturally, representing her home country of Malaysia in international competition came with additional pressure and high expectations. “I think being a national athlete, you realize you’re swimming for a larger entity than yourself. When I used to swim, I used to just swim for myself, swim for my mom at least, but then when you’re going to all these international games you have a lot more pressure,” Redza said.

Redza’s success was in large part enabled by the support and sacrifices of her family. “My mom was with me every step of the way,” she said. “I think her support really showed when I was drafted into the national team. She was there sending me to practices every day, in the morning, in the afternoon, sending me to early morning practices on the weekends too.” Because of the amount of traveling and training required of Redza, family holidays became a rarity.

Redza also credited her high school, the International School of Kuala Lumpur, for its flexibility. Few athletes on the national team also attended school simultaneously, and her teachers understood that her role as a national athlete—a rarity at her school—sometimes superseded academic obligations.

Redza had always expected that she would go abroad for university. Although she began by looking at Division I schools, she realized at the beginning of her senior year that she wanted to focus more on academics, and UChicago, with its rigorous academics and DIII athletics, proved to be the perfect fit.

“I really saw the passion there,” said Redza about UChicago’s swimming and diving team. “The entire team of like 60-plus people are there because they want to swim or dive, and I didn’t really get that sense when I visited the schools that were initially interested in me.”

Redza burst onto the scene in her first year at UChicago, breaking school records in the 100-yard and 400-yard individual medley (IM) contests and earning All-American recognition for her performances in the 400-yard IM and 800-yard freestyle relay. “[I was] quite surprised, actually. I came into college with no expectations at all,” Redza said. “I just knew that I would swim the best when I was having fun, and that definitely showed in my first-year performance.”

Her success is all the more remarkable considering the adjustments she had to make in the pool. International swim contests, including those in Malaysia, typically use long course meters (usually 50 meters from end to end), while college meets use short course yards (usually 25 yards). The distance from one end of the pool to the other is more than twice as short in college, and as such, there is greater emphasis on turns and underwaters.

But the volume of competitions came with challenges for Redza, not least burnout. “After first year I continued to train in the spring actually, when we usually have an off-season, because I had a Malaysian meet over the summer, so definitely not being able to take that off-season to reset my body took a toll on me,” Redza observed. A similar scenario developed after her second season, when she had to spend the spring preparing for the 2019 Summer Universiade, where she would again represent Malaysia.

While Redza’s first year at UChicago may have been her strongest from a performance standpoint, that didn’t stop her from giving the team her all in subsequent years. “You learn to [have] more of a leadership role, even if you’re not as fast as you were your first or second year,” she said. Now serving as captain, she has worked to ensure that everyone is staying motivated and engaged with the team, including those studying remotely.

Redza also served as a leader in the wider world of UChicago athletics by joining the Women’s Athletic Association (WAA), spending her first year as a freshman representative before progressing to the role of special events chair on the Executive Board in her second year.

“It was a really rewarding experience because I got to learn about sports from different perspectives,” Redza said of the WAA, where she is now vice president. “Growing up, when I was swimming at home, [I] never really got to interact with other athletes.”

Having that camaraderie with fellow athletes has been one of the greatest positives of Redza’s time at UChicago. “I found myself feeling happy and feeling prouder for a lot of the races of my other teammates as opposed to mine, and I think college swimming really teaches you that, because you’re part of this large family,” she said.

Redza has also found inspiration in the UChicago coaching staff, in particular head swim coach Jason Weber. “Since I wasn’t in the U.S., he [took] a chance [on] someone who’s from this small country in Asia,” Redza said. “I just fully respect him for that and for what he’s done for this program for the last 15 years.” She cited former director of athletics and recreation Erin McDermott as another influential figure in her UChicago career.

This year, there will be no competitions for Redza and her teammates. While few things are set in stone due to the fluid nature of the pandemic, Redza expressed hope that some virtual meets, where schools would compete by swimming at their home pools and comparing times, might come to fruition.

The swimmers’ training regimes have also been affected by the pandemic, particularly with pool closings. “For swimming, it’s harder to get that water cardio shape that you were in [before the pandemic],” Redza said. “I don’t think a lot of people really understand how hard it was to get back into it.”

Seeing the losses faced by last year’s graduating class, however, eased the pain of an altered ending for Redza. “I think with COVID-19 happening at least last year, as a third-year, and seeing how the seniors felt when the nationals were canceled or when everyone was leaving [for] home, I think that allowed us to start the closure process a lot earlier,” she said. “I think we’re doing the best we can given the situation.”

After she graduates in June, Redza will remain in Chicago, where she is set to work as an operational risk analyst in the financial technology sector. She looks back fondly on her time as a swimmer, with the University Athletic Association’s 2020 Swimming and Diving Championships being a particular highlight.

“We were so close to beating Emory [University] and it really came down to that last relay on the last day, where points really mattered,” Redza said. “I’ve never seen our team so supportive, so together, just cheering everyone on.” Redza also enjoyed the team’s training trips. “It is a week of hard, grueling training, but it’s just us in Florida or California, and we’re all there together…excited to explore the place and get into the zone of just swimming,” she said.

For prospective college athletes, Redza offers sage advice. “Just have fun with whatever you do. I think that’s one of the biggest lessons that I’ve learned from college swimming. The more you enjoy it, the better you’re going to perform, and the more you’re going to have a meaningful experience.”