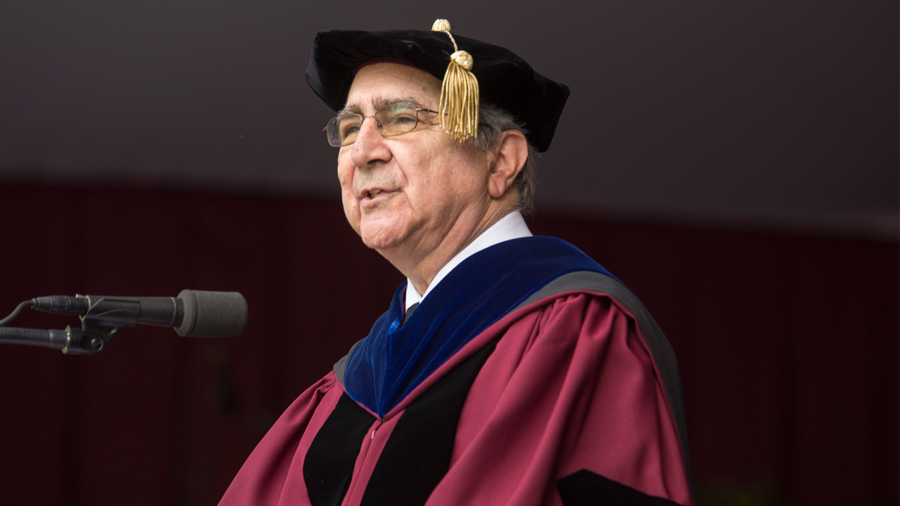 The University of Chicago honored former president Hugo Sonnenschein, who served in the role from 1993 to 2000, at a memorial service on Saturday, April 30, at Rockefeller Memorial Chapel. Sonnenschein, aged 80, died on July 15, 2021, in Hyde Park. Sonnenschein has been credited with transforming the undergraduate curriculum, campus facilities, and the University’s reputation through a series of sweeping policy reforms.

President Paul Alivisatos spoke first at the service. “I so much regret that I never had the opportunity to meet Hugo. I feel fortunate to have the opportunity to get to know him through his significant legacy: the enduring and impactful changes he put into place as president, his reputation as an eminent scholar of economics, and the generation of students and scholars and administrators he inspired and mentored throughout his long and distinguished career.”

To make the College more appealing to applicants, he suggested a reduction in the number of required courses for the undergraduate Core Curriculum, which resulted in intense and at times controversial debate among University faculty before its implementation in 1999.

In his remarks, Board of Trustees chair Joseph Neubauer revealed that the acceptance rate for the Class of 2026 was the lowest in University history. “With a 5 percent admissions rate, 80 percent yield, and with a college population of 7,400 students, we’ve executed what [Sonnenschein] envisioned for us,” Neubauer said. The Office of College Admissions did not respond to The Maroon’s request for confirmation of these figures.

Sonnenschein’s reforms also increased the University’s endowment from $1.2 billion in 1993 to $2.9 billion in 2000. A more robust financial situation allowed Sonnenschein to outline his Campus Master Plan, which suggested the addition of more campus facilities, including the Gerald Ratner Athletic Center, Max Palevsky Residential Commons, more science facilities, and a campus for the Booth School of Business.

Sonnenschein’s colleagues and friends reflected on his character and how it allowed him to enact such groundbreaking policies. “In true UChicago fashion, [Sonnenschein] always asked the right questions. He always got to the facts and acted upon them. Hugo fully embraced the values and aspirations of our university but understood [that] to preserve and protect those values in the future, difficult decisions had to be made,” said Edward H. Levi Distinguished Service Professor of Law and former provost Geoffrey Stone.

University Chancellor Robert Zimmer, who served as president from 2006 to 2021, felt Sonnenschein’s impact stemmed from his thoughtful approach to his role. “Hugo and I agreed on many things, and likewise often disagreed. I greatly respected and admired him for his independence of thought, and that he was always willing to argue through disagreements,” Zimmer said.

“Even as Hugo reached the pinnacle of higher education leadership, he never stopped being a remarkably gifted teacher. Only the nature of his classroom and his students shifted,” said Steven Poskanzer, former chief of staff to the president’s office. “As accomplished as Hugo was, his ego was never wrapped up in being a university president. This liberated him to model honesty in leadership.”