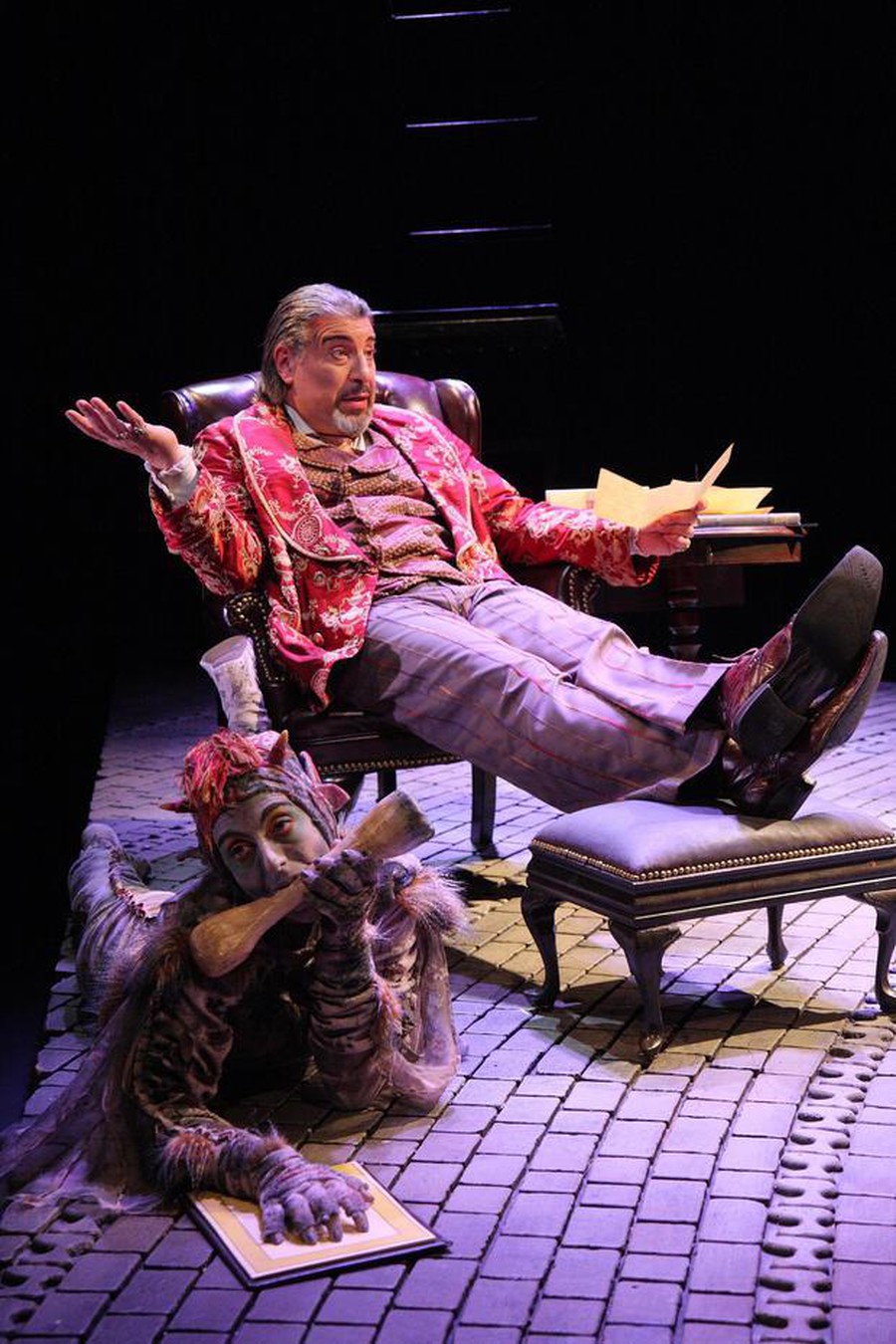 Imagine a formal dinner where the guests are dining on human souls and the first terse words from the host’s mouth are these: “Hell expects and demands careers of unbroken success.” Of course, this is no normal dinner—it’s the opening scene of Jeffrey Fiske’s adaption of C.S. Lewis’ The Screwtape Letters, in which hell is a bureaucracy fully employed in the business of “undermin[ing] faith and prevent[ing] the formation of virtue.”

The speaker is Screwtape (Max McLean), the Undersecretary of the Department of the Tempter’s Training College in hell. He’s giving a pep talk of sorts to his pupils, including his nephew Wormwood, all of whom begin their careers bringing human souls to hell. The 90-minute play is comprised of letters of advice from Screwtape to his nephew Wormwood on how to best derail a young Christian man’s quest for virtue. The audience sees that for God and the Devil everything is a matter of black and white, truth and falsehood. Screwtape makes it clear that Wormwood’s main goal as a tempter is to befuddle the new Christian, to “edge the man away from the light,” because as Screwtape states, “the safest road to hell is the gradual one.”

It becomes clear as the play progresses that as hard as Screwtape, Wormwood, and the rest of hell struggle to “get man’s soul and give him nothing in return,” these evil forces are fighting an uphill battle. Screwtape tells Wormwood that “nothing is naturally on our side”; pleasure, reason, and goodwill were created by an all-powerful God to be used for his purpose and glory. All Wormwood and his fellow tempters can hope to do is distort these goods and prod humans to fall for their deception. As Wormwood tempts his Christian with many sins, spanning from vanity and sexual immorality to spiritual pride, the task of deceiving him proves exceedingly difficult for one main reason: The Christian really believes. The Christian’s faith in a God that promises salvation acts as his spiritual armor, which no force of hell can penetrate.

The script stays very true to Lewis’s book, so it digs into some heavy Christian doctrine. Central to Lewis’s religions notions is the concept of spiritual warfare as a very real, ongoing event. Screwtape articulates the basic difference between God and the Devil when he says, “We want cattle that can finally become food. He wants servants who can finally become sons.” Lewis wants to tell us that being separated from God for all eternity is more than a mere trifle, that cluttering our lives with distractions turns us away from the very serious matter of our souls’ eternal state.

Although The Screwtape Letters has a two-person cast, only one of whom has speaking lines, Lewis’s spiritual message is conveyed with such audacity that not even a full orchestra could add to its power. How Max McLean could impressively deliver, yet alone remember, his entire 90-minute monologue is beyond me. C.S. Lewis’s fame and McLean’s oratory finesse go a long way to accounting for the sold-out and standing-room-only audiences during the play’s New York and D.C. runs. McLean’s talent, combined with C.S. Lewis’s script and Jeffrey Fiske’s vision, create more than just a production: They create an experience that could leave the viewer audience moved, even permanently altered. C.S. Lewis makes a case that heaven and hell are real, tangible places, and that the difference between the two is not to be taken lightly, especially when one’s soul is at stake.