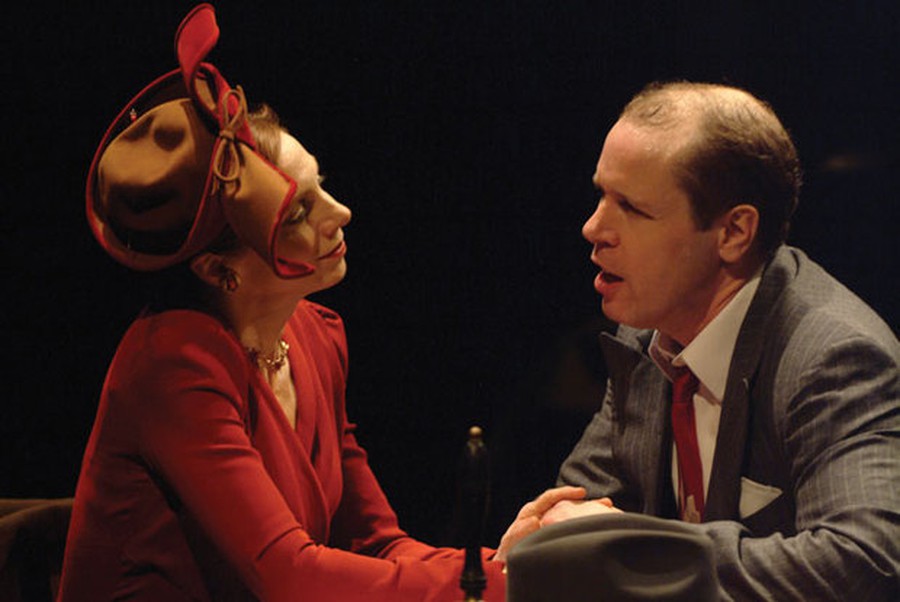 Shakespeare’s Macbeth, besides being one of his most iconic plays, is also one of his shortest. Pairing the explosive and murderous ascendancy of General and Lord Macbeth to the Scottish throne with the highly volatile and destructive personality of Lady Macbeth, the play comes to its devastating end in half the length of Hamlet. When the curtains rise in Radio Macbeth, SITI Company’s adaptation at the Court Theatre, this condensed, simplified quality seems even more strongly emphasized.

Framed as a rehearsal of a radio broadcast of the play, Radio Macbeth initially jettisons most of the visual aspect of theater. Set pieces are almost entirely absent; the stage is populated only by two tables, an assortment of folding chairs, various books, and other knick-knacks. I half-expected that the actors would not even reenact the whole play but jump to the more dramatic scenes. But I was sure, since the adaptation is supposed to be geared to radio, that they would choose to highlight the powerful language of the original instead of trying to modernize it for contemporary audiences.

By the end of the play, that expectation turned out to be justified, although not without qualifications. Macbeth is left intact, but like any other play, scenes that carry the most dramatic weight are given the most emphasis. Eerie ambient music, shifting light patterns, and odd vocalizations underline the sense of dread in scenes where the fusion of ambition, hopelessness, inner anguish, and pure drive is felt most powerfully. While it is easy to call these additions gimmicky and cliché given the play’s overall sinister tone, they lend added drama to some of the key scenes. Ellen Lauren, despite turning in a frighteningly compelling performance as Lady Macbeth, gains a lot from these special effects, particularly when she is unable to remove those damned, bloody spots from her hands.

Stephen Duff Webber, however, gives by far the finest performance of the play. His rendition of the compulsive, ambitious, and violent Macbeth truly captures the complexity and constant distress of the character. During the banquet scene in which Macbeth sees the recently murdered Banquo roaming his dining hall, Webber is able to retain the title character’s emotional nausea and anguish even in the midst of revelry. The simplification of the play carries over even into its small cast; only four extremely capable actors fill in for the various supporting roles.

However, Radio Macbeth does little to exploit the opportunities that the extra artistic medium of radio offers. It doesn’t seem like this aspect was considered seriously. Instead of integrating radio and the theater, the play alternates between the two. At times, the actors seem unsure of whether they should damp down the histrionics because as radio performers, they are technically unseen by the audience, or heighten the theatricality of the scene because they are in fact performing a play.

Aside from this, however, the play provides a very powerful rendition of one of Shakespeare’s most well known tragedies, proving the continuing freshness and originality of his words.