Fourth-years Pancratz and Kinsella in the backcourt will balance out young post players. 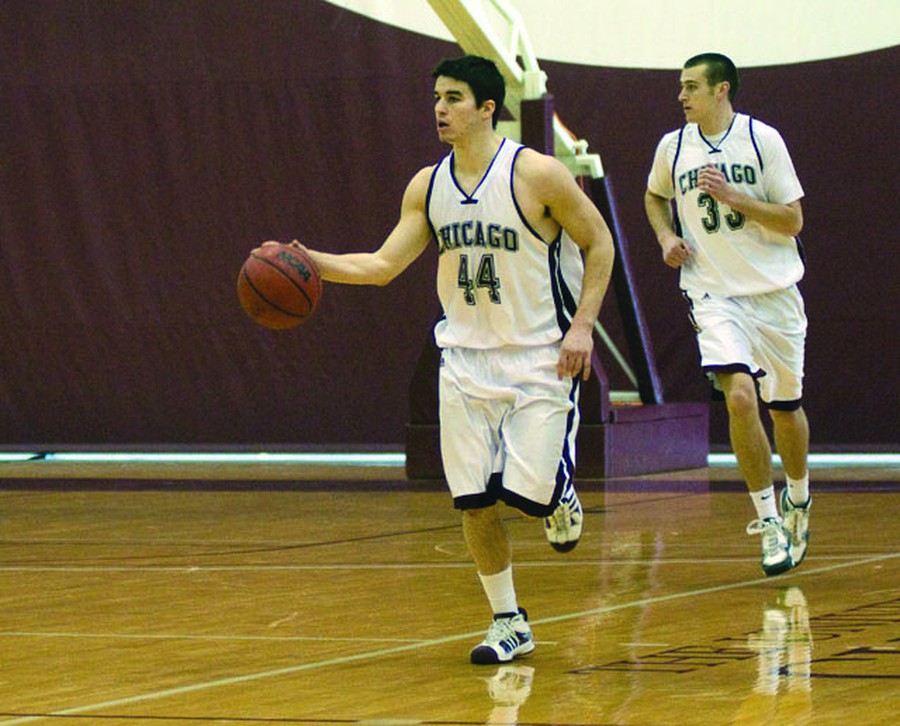 Men’s basketball is hoping that its veteran backcourt will propel the Maroons to a victory at this weekend’s Midway Classic and a UAA championship by the end of the season.

Around the perimeter, the team returns all of last year’s starters, and has some strong players backing them up.

“[Second-year] Michael [Sustarsic], [fourth-year] Jake [Pancratz] and [fourth-year] John [Kinsella] started all of last year at the point and two wings. They’re back, and I think that will be a strong point for our team,” head coach Mike McGrath said. “Not only is our starting group there a strength, our depth there is really as good as you can hope for.”

The frontcourt, for its part, doesn’t have any returning starters, but McGrath is confident in the players’ ability to perform.

“On the front line, where we lost seniors last year, we don’t have a lot of returning experience. I think we have a good pool of guys to work with. I’m pleased with our group,” McGrath said. “Coming back out of last year, we don’t have anybody who has been a significant contributor the same way we do on the perimeter. That’s a thinner position for us in terms of depth and experience.”

On top of the loss of the seniors, two players that the team expected to fill the vacated position won’t be appearing this season. Second-year Alex Doyle will be unable to play, and Doyle’s classmate Stephen Palmtag tore an ACL earlier this year.

“It was kind of a relatively inexperienced group there, and then we took out two guys from that mix,” McGrath said. “That’s what makes it pretty thin.”

This season, the Maroons were able to get some practices in especially early. In September, the team spent 10 days traveling and playing in Argentina and Chile, and they practiced stateside for 10 days beforehand.

“I think we really benefited from the 10 days before our trip to South America and the trip itself. We came in and worked really hard during those 10 days and set the tone for the rest of our year,” Pancratz said. “Also, during the trip I felt we really came together as a team, due to the amount of time we spent with each other off the court.”

Having the opportunity to play together extensively before the season’s official start will hopefully prevent a start similar to last year’s, when the team went 12 games before getting its first win, and finished with a record of 6–19 (6–8 UAA).

“The foreign trip was huge,” McGrath said. “I think that will help us a lot in terms of getting off to a good start.”

In addition to the South America trip, McGrath believes that the upper-class leadership will stop the team from getting flustered and frustrated by early setbacks.

“I think [the upperclassmen] are outstanding workers, outstanding leaders, and really good guys,” McGrath said. “What happened last year was we had a chink in our armor early, we lost a game, and we started getting tense. We started looking over our shoulders, as opposed to coming together and saying we have to fight through this. I think if we face some adversity in a game early this year, which I’m sure we will, I think this team will come together and fight through it better.”

Pancratz, one of those team leaders, is ready to shake off whatever setbacks the team encounters and keep the players focused on their long-term goals.

“I think my role along with the [four] other seniors will be to continue to set the tone as far as the level of energy, enthusiasm, and focus on our goal of winning the UAA,” Pancratz said. “We have a pretty long season, and there’s a tendency to have some off days, and it is up to the leaders to motivate and lead by example to make sure that we continue to get better every day.”

The Maroons head into the first weekend of the regular schedule looking to come out victorious at the Midway Classic. Their first game will be against Earlham (1–1) tomorrow. Earlham, which is coming off of a 3–22 season, is playing with a relatively young squad this year. On the other side of the bracket, Rose Hulman (0–1) will be playing against Southwestern (1–0). The winners and losers from those match-ups will meet in the championship and consolation games on Sunday.