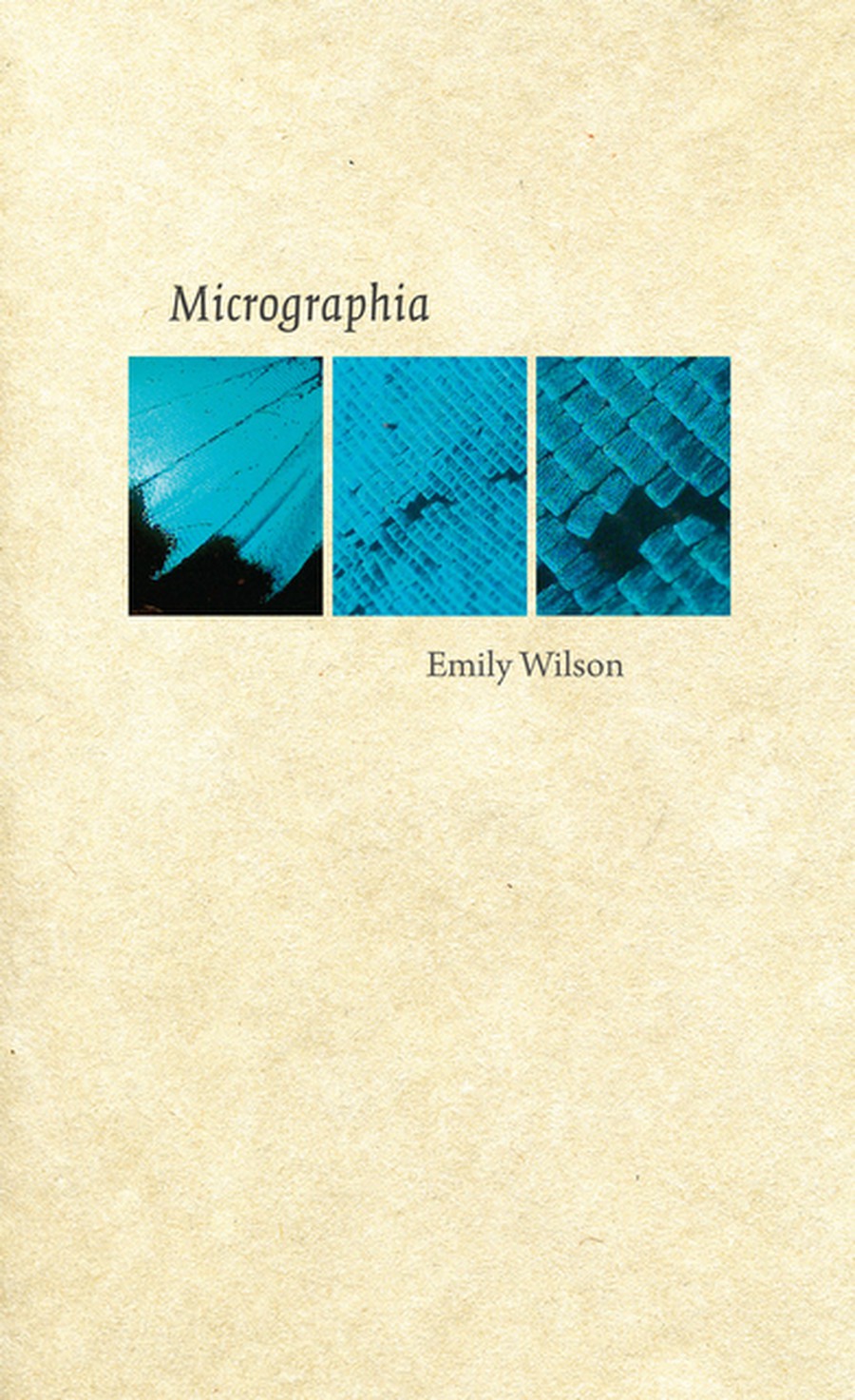 Courtesy of University of Iowa Press

Emily Wilson has published only two books of poetry, but her widely acclaimed work has already drawn comparisons to Emily Dickinson. Born in Ohio, raised in Maine, educated at Harvard, and trained at the Iowa Writers’ Workshop, the Brooklyn resident is also the recipient of a fellowship from the National Endowment for the Arts. A world traveler and nature-lover, her poetry describes a multiplicity of places, reflecting the diverse settings she has encountered. Wilson has been commended for her ability to create a powerful sense of place in her poetry, for being able to make readers feel as if they are actually living within the space of the poem. I had the opportunity to interview this up-and-coming poet and get her perspective on her own poetry and poetry in general before she read from her most recent poetry anthology, Micrographia, this Thursday at Rosenwald Hall.

Chicago Maroon: People interpret the same poetry differently, so I was wondering how you would describe your own work. What would you say Micrographia is about?

CM: What would you say the message of Micrographia is, if it has one?

EW: I’m not sure there is a message. I want the poems to reflect a deeper seeing of nature. I’m interested in the poems being a kind of experience—not just for me, the writer, but also for the reader. I want them to feel like something is happening.

CM: I noticed that many of your poems describe nature. What themes do you notice yourself using frequently in your poetry?

EW: I think the poems are informed by nature, but just as much by encountering art and made things, and other things that involve communion with nature, like landscape paintings. I’m interested in the interweaving of the experience of nature and the representation of nature, and the rendering of experience in media. I’m also very interested in science from a poet’s perspective. I like exploring different lexicons, different ways of speaking, including the way scientists speak.

CM: What sorts of things do you consider to be poetic?

EW: I always have a taste for things which are paradoxical in nature—things that suggest their opposites. I’m always trying to get to a point where I’m surprised by things. When the more I look at things, the less I know about them. I like the idea of looking beneath the surface. I suppose it’s paradoxical, the idea of making things visible through language. I’m interested in the image and how that works. It’s a strange and contradictory thing, to make things visible in language.

CM: Where do you find inspiration? How have the places you’ve lived and visited in your life affected your poetry?

EW: Anywhere I happen to find myself. I think within any particular physical environment there are things to be fascinated by. I don’t think it matters where I am. I never thought I would live in a city. New York City is challenging because of its density and complexity, but it’s incredible. What I like about New York is that it’s so different from the other kinds of landscapes where I found creative material and inspiration. Before New York, I spent most of my time in mountainous, rural areas. I lived in the mountains of New Hampshire for a while, and life above the tree line had a big impact on me. I really had the opportunity to live in a stark and wild sort of place. I think that certainly influenced my career as a writer. And I had other experiences in unpopulated areas, like Montana and Antarctica. In Antarctica, I experienced a very elemental landscape. It’s just a sea of white as far as you can see. Your sensory experience gets reduced. That experience is very different to write about. That experience of sensory reduction focused my interest of poetry.

CM: What made you decide that you wanted to write poetry for a living?

EW: I always wrote as a child. It was just an instinctive thing to start writing. I think it was always something I did. I think it took me a while to decide that this would be my primary concern. I resisted it for a while. I think these things find you more than you find them. I’ve been fortunate enough to make this central in my life.

CM: What life experiences have most affected your poetry?

EW: Having lived in many places and having many influential teachers who exposed me to poetry I’d never read and to ways of reading poetry that opened things up for me. I’d probably put those two things front and center.

CM: How did your education lead you into becoming a poet?

EW: I had a basic interest in reading poetry. My mother was very keyed into that and she was very good at finding things for me to read. My life has reflected that move from writer to writer, philosopher to philosopher, creating a web of influence. In college, I liked to write, but I did not get the courage to join a writing workshop until my senior year. I was awkward. But I had a really good teacher, and she helped me. It’s just one of those things. One finds the person to open the constraints, and you open up to what you are as a writer. I would not have called myself a poet then, but I’d definitely discovered something. For a while, I was just trying to make a living, and writing took a backseat. Then I went to the Writers’ Workshop in Iowa. The very important teachers that I had in Iowa helped me across the next threshold in terms of my writing. If my experience has taught me anything, it’s that it is critical to have mentors and teachers when you really need them.

CM: What does it mean to you to be a poet in the 21st Century? Do you think it’s different than in previous generations?

EW: I think it’s probably no more or less important than it’s ever been. I believe in the power of language. It’s all we have, and it can be an incredibly powerful thing. I think it will always be important. I don’t think there will ever be a case when it can’t be justified. It’s a way of being in the world that’s very important to me, and I think it will be important to others all the way through. I feel very connected to the poetic tradition. It’s very rich. It has that same quality of mystery and delight to me. And relevance.

EW: I go back to certain poets who are the sources of connectedness, like Emily Dickinson, Gerard Manley Hopkins, Mariannne Moore, Robert Stevens, Robert Frost….They are always there to be discovered. It’s what makes life as a reader so exciting, that you can find one of these writers and find deep resonance, deep connection.

CM: How would you describe your writing style?

EW: I would probably say it’s fairly condensed, but I think it’s changing. The poems are becoming longer and more willing to go on. I think for the most part they’re very short and condensed, but recently something’s happened, and they’ve grown on the page. I think my poems have a certain sound quality. I’m very interested in rhythm and assonance.

CM: How has your poetry changed since your first anthology, The Keep?

EW: I wanted to progress. I wanted to do something different. I think I had a basic desire to stay in poems longer. My instinct has always been to reduce something to a pressured, hard poem. I wanted to write longer poems, to see what it would feel like to sustain a longer piece. I don’t know what will happen next.

CM: What advice would you give an aspiring poet?

EW: I very much feel the importance of reading deeply, and not just in the American and English tradition. It’s really being adventurous in terms of reading. I think modeling one’s poems on others can be good too. You should do anything that helps you find our own way of being in a poem. Finding poetry in other time periods can be extremely inspiring. Getting people to share your work with can also be helpful. That accountability to others can help you get it done, and that community can be a nice thing to have. Publication is wonderful, and, of course, we all long to have things out there, but it’s certainly not the only reason to write.

CM: Which poems are you most proud of?

EW: I think sometimes the thing you feel is that you’ve done something, noticed something in a way that surprises you in a tone that you wouldn’t have expected. When I write a good poem, it’s a recognition of myself. I knew I felt that way, but I didn’t know I could say it. Poems can show you yourself in a way that you did not expect yourself to be or would not ordinarily have been brave enough to show yourself.