Weekly round up for July 16

Talks to resolve a strike that has slowed campus construction will resume next week; slain CPD officer Thor Soderberg was honored at Rockefeller Chapel Thursday morning 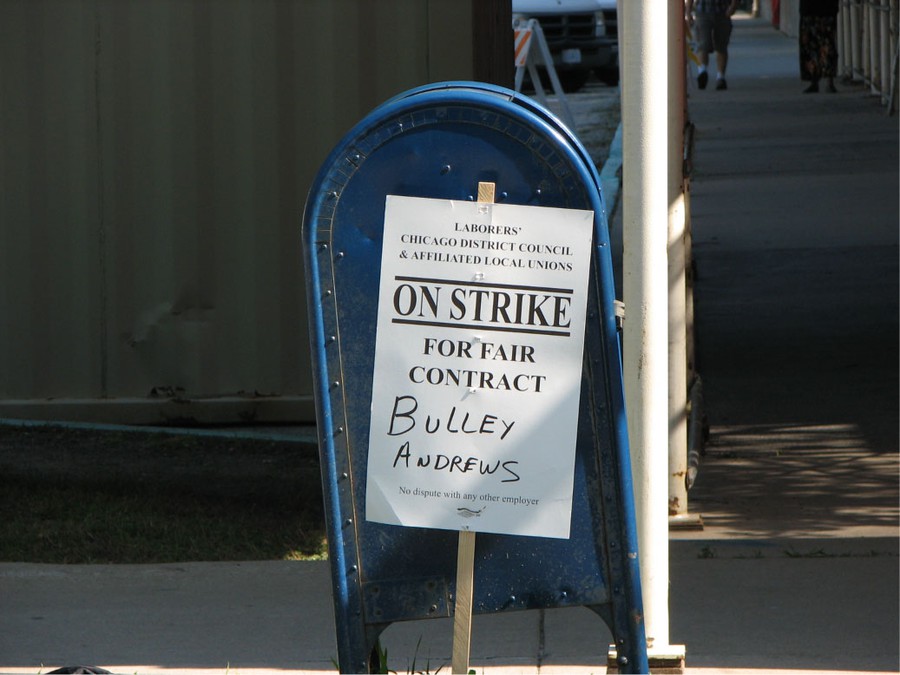 Union representatives and a contractors' association will meet again Monday to discuss ending a strike that has idled several construction projects around campus.

Workers associated with Local 150 of the Union of Operating Engineers have been on strike since June 30, and the Laborers' District Council of Chicago joined the strike the following day, bringing most larger construction projects in the Chicago area to a halt. On campus and nearby, work has stopped on the Mansueto Library, the Lab Schools, the Logan Arts Center, the hospital, and the new Chicago Theological Seminary building.

On Wednesday, the two unions reached a deal with the Chicago Area Independent Contractors Association (CAICA), which represents smaller contractors. That deal will allow some projects to resume, but the main stumbling block is the dispute between the unions and the Mid-American Regional Bargaining Association (MARBA), which has a larger membership than CAICA and represents most of the contractors affected by the strike.

Ed Kulchar, a marketing representative for the Chicago Laborers', said that in light of the agreement with CAICA, he was "very optimistic" the unions would strike a deal with MARBA next week.

"With us coming to an agreement with the other association, things should fall into place," Kulchar said

But Lissa Druss Christman, a spokesperson for MARBA, told the Southtown Star the CAICA deal had "no relevance" to the construction sites run by MARBA contractors.

Though the strike has stalled work on campus, the unions and associations at odds are independent of the University, and the University is not involved in discussions between the two sides.

The City of Chicago held a public memorial service for Thor Soderberg, 43, in Rockefeller Chapel Thursday morning. Soderberg, a Chicago Police Officer, was fatally shot July 7 outside a police building at 61st Street and South Racine Avenue, about three miles west of campus.

More than 1500 people packed into Rockefeller for the service, while bagpipes played in front of the chapel and a fire truck parked at the intersection of 59th Street and Woodlawn Avenue flew an American flag from the top of its ladder. The attendees included Mayor Richard Daley and Governor Pat Quinn. The service was simulcast in Max Palevsky Cinema for those who didn't get a seat in Rockefeller.

Soderberg's family and friends spoke of the sense of duty he brought to the police force, and the kindness with which he treated people he encountered on the job. His wife, Jennifer Loudon (SSA '98) said that if someone had warned Soderberg, "'In your 43rd or 44th year it's going to end like this,' he would have done [his job] anyway."

Soderberg lived with Loudon in Kenwood, on the 4600 block of Ellis Avenue.

48-year old Lenvert Debardelaben has been charged with robbery and sexual assault after an incident that occurred last Friday, July 9, on 54th Street between Woodlawn and Kimbark Avenues.

According to the police report, around 1 p.m., Debardelaben noticed a woman struggling to get a child in a stroller through the front door of an apartment building. After holding the door for the woman, Debardelaben followed her inside, where he revealed a knife and asked for her money. As the woman began to hand over her cash, he grabbed her entire wallet, then attempted to sexually assault her.

In the process, the woman was able to pound on an apartment door. Debardelaben fled when a resident inside opened the door, and when the resident subsequently called the police, officers responding the call noticed Debardelaben running nearby. Debardelaben was then apprehended while attempting to scale a fence, and the victim positively identified him shortly thereafter.

Debardelaben, who lives on the 7700 block of Drexel Avenue, was denied bail this week.

An unrelated sexual assault was reported last Sunday, July 11, around 2 p.m. at 53rd Street and Ellis Avenue. A woman invited a male acquaintance to her home and, while they were unaccompanied, the man forced intercourse against the woman's will. The woman is not affiliated with the University. The Chicago Police Department is pursuing the case.

Morrie Morgan, back in the saddle

The ranks of fictive action-hero UChicago alumni are thin, it's fair to say. There's Indiana Jones, but after him, who else can we claim? Jake Gyllenhaal's character from Proof in a pinch, maybe.

And since action heroes, much like tenuously-affiliated Nobel laureates, are a commodity no university can ever get enough of, it's good to know novelist Ivan Doig has quietly been crafting us one more. Doig, who graduated from Northwestern, has published ten novels since the early 1980s, and two of the last three—2006's Whistling Season and the just-released Work Song—have chronicled the adventures of U of C alumnus Morrie Morgan in frontier Montana.

In the books, Morrie doesn't necessarily want to leave Chicago, but gambling debts and unsympathetic collections men make his mind for him, and Morrie lights out for the territory. Upon arriving in Montana, Morrie gets mixed into an ill-fated love triangle and flees again, not to return until ten years later, just in time for the plot of Work Song, which is set in Butte. This latest installment has Morrie tangling with a mining company and unionized workers. I haven't read it yet so I can't say how things turn out, but you have to figure that if he made it through a bachelor's at UChicago, Morrie stands a good chance against whatever else Doig throws his way.