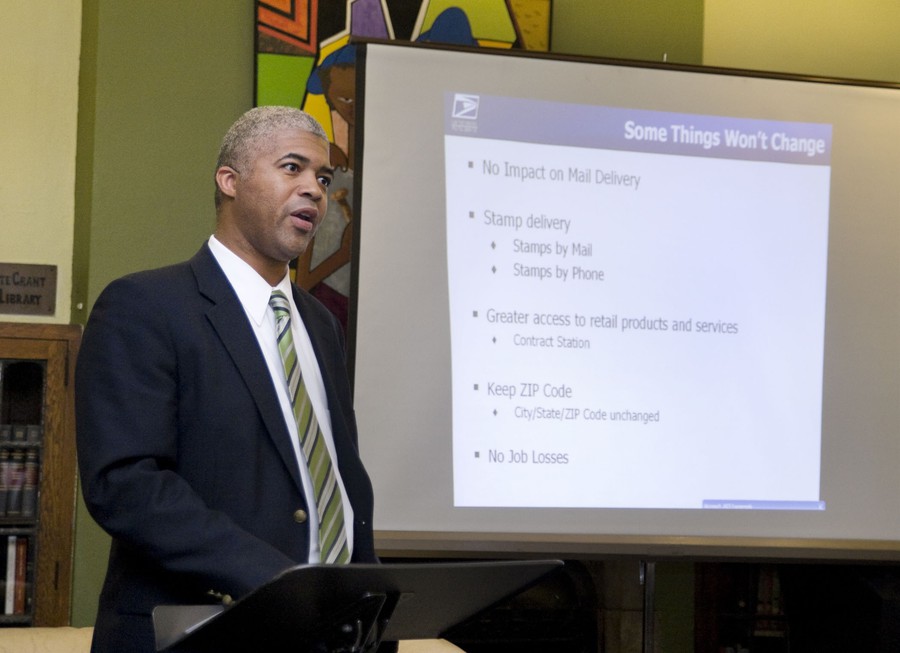 The Finance Station U Post Office (FSUPO) was one of 3.5 million post offices identified by USPS because it brought in less than $600,000 in annual revenue last fiscal year.

“I think there is a very real possibility of the unit closing,” USPS Chicago District Marketing Manager Regina Aikers said. “There is also a possibility of it staying open.… The deciding factor is the community response.”

Community members and students in attendance argued against closing FSUPO, which is located behind the Barnes & Noble bookstore, pointing out that it attracts long lines and has a convenient location. Postal workers were also among those who defended the office.

“This is a gold mine over here, so why close it?” Postal Carrier Larry Parks said. “There’s a lot of money in this neighborhood and it’s good for the students. I’m a collector, so when I go through I see that the University is throwing mail at us.”

If FSUPO closes, nearby stations such as the Lake Park Postal Store or the Jackson Park Post Office will take over its services. Once a decision is made, the public proposal will be posted at FSUPO for 60 days.

Community members argued that the University wouldn’t be able to operate with a post office farther away.

“Imagine if you had [postal workers] being called to come and pick up out of all of those University buildings,” Hyde Park resident Gary Ossewaarde said.

Speakers from the USPS assured the audience that the decision to look at closing post offices was a last option.

“My staff and I are here to listen to your concerns before we make any decisions,” District Manager Postmaster for Chicago Karen Shank said. “No final decision has been made about this unit or any other.”

One alternative under consideration would be to close FSUPO and instead open a “village post office” out of a retail store offering P.O. Boxes, shipping services, and stamps. The USPS uses its own profits as incentives for businesses to open village post offices out of their stores.

If a village post office route is opened, zip codes will not be affected.

“Ultimately our solution has to be one that allows us to remain fiscally successful,” Donald Nichols, Executive Manager of Post Office Operations, said. Nichols assured the audience that no jobs will be lost if the FSUPO closed.

“There is a plethora of savings that are well beyond what is paid to the contractors,” Nichols said.

Shank said that the USPS’s budget shortfall was serious, citing figures showing that annual mail volume has gone down by 42.5 billion pieces since 2006, while annual retail revenue fell $2 million compared to 2006.

“We wouldn’t be here talking about closing a facility if we weren’t in the financial situation we’re in,” she said. “The postal service has never faced a crisis like we are in.”