The scene changes, but The Beats stay the same 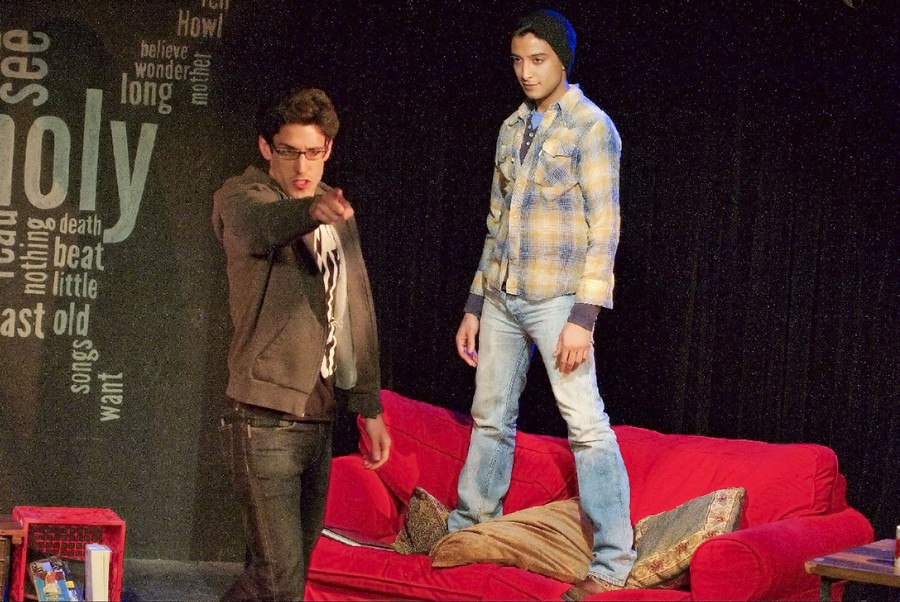 A bomb sets off The Beats, 16th Street Theater’s latest production. The actors first assail the audience with a barrage of words written by Gregory Corso, the first of the play’s poets. “Bomb,” they say, “budger of history, breaker of time, O havoc antiphony, barracuda.” The staccato, experimental rhythm of the work is right on beat with Ginsberg, Kerouac, and their kin whose works are read later in the performance.

After the play, local poet Frank Pete commented that, at first, it was hard not to hear the words as poetry, as something at once indirect and meaningful beyond the simple phrasing. But once you sat back, you “let the words wash over you,” and the poetry became something other than dialogue or choral odes, simply becoming the music of the moment. The Beats perfectly represents a lyrical work that does not remain sideways and layered, but becomes the words of the original poet, fused seamlessly into a type of production where it is not necessary to listen for the beauty of the language; you simply drown in it.

The Beats, written by Marilyn Campbell, is essentially a long poetry reading bedazzled with little chunks of dialogue between characters. Elements from Kerouac’s On The Road and Ginsberg’s “Howl,” among many other writings, make up the mythical plot of the show. The play follows the beat poets from adolescence to middle age. Campbell, the award-winning adapter of Crime and Punishment, said of the show that it was particularly “difficult to use only the poets’ words to tell their stories” and not to embellish it with elements of her own imagination. Similarly, director Ann Filmer responded to an audience member’s question during post-show discussion by saying: “It’s really difficult [for an actor] to reproduce a poet’s style [when speaking their work].” This leads to a realized tension between poet and actor throughout the production.

Though at times a bit heavy on content and light on discussion, the show comes off on the right foot and gives the audience the feeling of having crawled through late-night cafés. John Taflan captured the poetic spirit of the generation particularly well with his impassioned recitations as Allen Ginsberg. He also played into an interesting aspect of 16th Street’s design for the show: the culture of the modern hipster. Director Ann Filmer wanted to draw parallels between the Beats and the hipsters for the benefit of today’s audience, updating the production with fresh references. The remainder of the ensemble performed admirably. Some standouts included Carly Ciarrocchi’s impassioned reading of Diane di Prima’s “Rant” and Adam Poss’s engrossing embodiment of Jack Kerouac.

The atmosphere of The Beats addresses both new and slightly less new tropes of modern poetics. If the audience remains after the performance to listen to local poets read their poetry, the effect is an awe-inspiring comparison between today’s rising stars and past revolutionaries. Ann Filmer’s choice to present readings of fresh poetry at the end of the production is inspired and gutsy, equal parts revealing about the quality of work done in preparation for the actors’ performances and surprising in that, although they didn’t quite match the fever pitch the local poets brought on with their own work, the actors successfully recreated an atmosphere of tension and spitfire realized during the Beat era.