Archrival Wash U comes to town for season finale 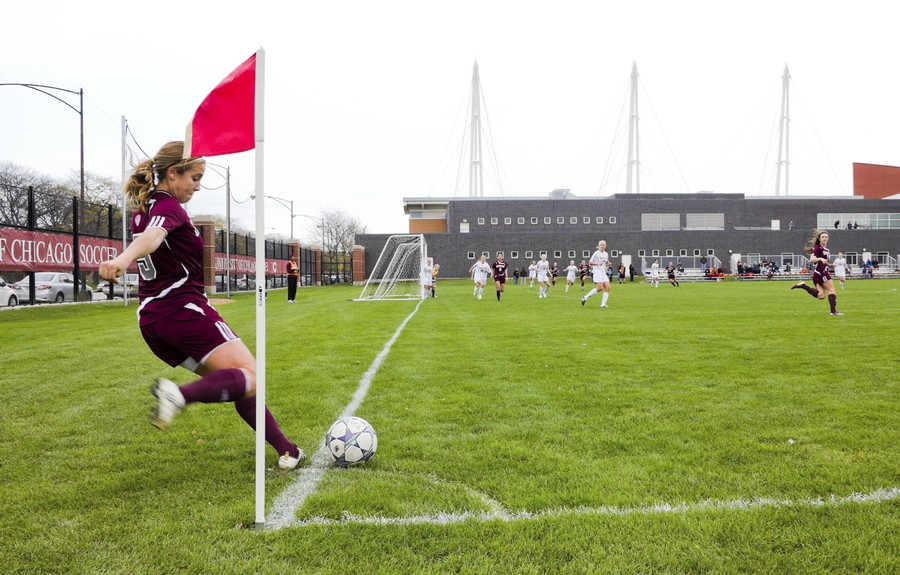 Fresh off a 1–0 win against Rochester, women’s soccer will close their regular season when they face Wash U tomorrow. Chicago (9–5–2, 2–2–2) needs a strong performance in Sunday’s match to propel them to another win, and a spot in the NCAA D-III tournament.

“The team was focused and committed throughout the game which is the difference for us when we compete and win like we did on Sunday,” Head Coach Amy Reifert said.

The players hope to apply some of the same winning strategies when they tackle Wash U (14–4–0, 4–2–0). “We scored a systematic goal and were able to hold off a really dynamic Rochester offense during a tough second half where they really pressed us,” said fourth-year goalie Emma Gormley. “I think that if we stick to the same game plan for the Wash U game we should be in pretty good shape.”

A win against Wash U would ensure the Maroons a bid in the NCAA D-III Tournament, a goal that serves as the team’s chief motivator. As second-year forward Micaela Harms says, “I know that the whole team is really excited because Wash U is a very important game for us, and I’m confident in my team’s ability and resolve to win this last game.”

However, the Maroons know that this critical match against one of their chief rivals will require their utmost focus and ability. The match holds equal significance for both teams, as the Bears are also looking to gain a postseason berth. In Wednesday’s regional rankings, WashU is ranked second, while Chicago is ranked fourth.

“[Wash U] is a strong physical team with lots of talented soccer players,” says Reifert. “We will look to focus on the little things this week to make us better within our system, [such as] one-on-one defending, finishing runs, and combination play in the midfield.”

Saturday’s season finale will be bittersweet for the team’s fourth-years. Gormley will miss playing with the team, which she sees as “more like a family than just a team.” She will also miss the scale of college-level competition. “Once this year ends I won’t ever play in another game that means as much as the one on Saturday does. I’m definitely going to miss the excitement that comes with playing in those big games and knowing you have fans cheering you on and supporting you.”

Reifert keeps the team’s veterans in mind when weighing the magnitude of Saturday’s match. “They are the heart of our program, and our effort on Saturday will certainly be focused to make sure they get to play in the postseason.”

In the meantime, the Maroons are optimistic about their chances at making the postseason. “[We] will need to bring an all-or-nothing attitude to the game,” first-year forward Sara Kwan said. “If we play with the passion we played with this past weekend, I am confident that Wash U will not be able to handle us.”

Chicago plays Wash U at Stagg Field tomorrow at 1:30 p.m.