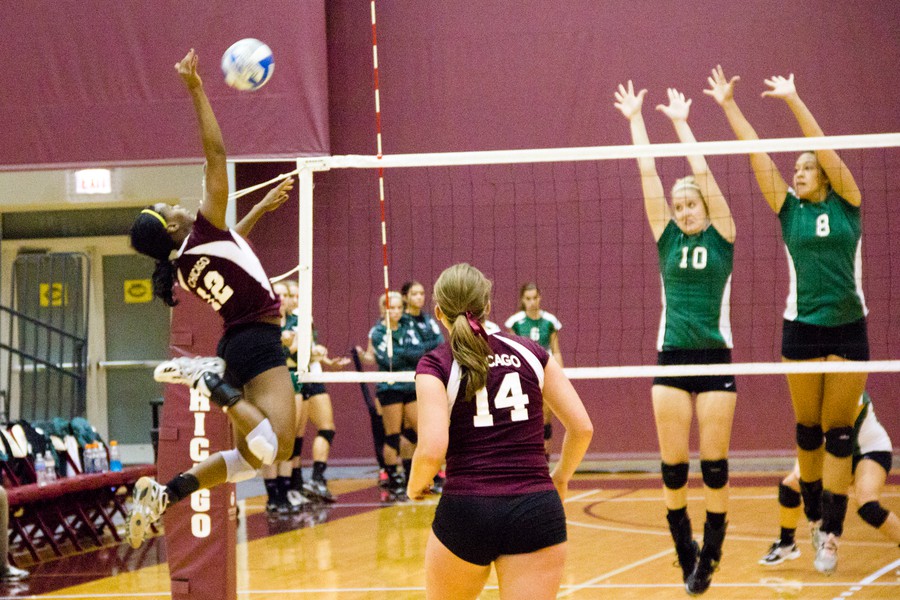 In the twilight of summer days and the looming darkness of fall, there still resides a smoldering supernova in the northern hemisphere. That star is the volleyball squad, which continued its torrid pace in defeating Wisconsin-Lutheran on Wednesday.

The Warriors from the north came into the match with the explicit strategy of employing finesse shots to combat the overpowering skill and depth of the Maroons.

“They were certainly a tough team to play,” fourth-year Colleen Belak said. “Not necessarily because they were an extremely strong team, but because of the often sloppy swings they sent over the net.”

“It was a hard team to play against because they sent balls over the net we weren’t expecting—mis-hits to corners or into the middle of the court,” third-year Katie Trela explained. “Those shots are hard to read because not even the hitter knows what’s going to come off her hand in those cases.”

“Our blockers stayed disciplined and set up a strong block, which forced Wisconsin-Lutheran to resort to tipping and using other shots,” second-year Morgan Clark said. “Our net presence forced them to alter their plan of attack, which ultimately put us in control of the match and allowed us to play our style of game.”

Because of the Warriors’ unusual tactics, the Maroons’ strong play at the net ironically resulted in diminished numbers defensively for the Chicago side, with the team achieving only one block compared to Wisconsin’s nine and a half. The record on defensive digs was more favorable to the Chicago narrative, with the Maroons superior, 26–19.

On the offensive side, Clark led with seven kills as Chicago nearly doubled Wisconsin’s total, 42–22. Four other Maroons collected four kills each, including fourth-year Isis Smalls, who hit an emphatic winner in the decisive third set to put the game out of reach.

“We have been trying to focus on terminating the ball more in practice,” head coach Vanessa Walby said. “Our team had a lot of opportunities last night to see the open spots on the floor and make good shot selections for kills.”

“[We] felt pretty good about that game, and it was great to get another win on our home court,” second-year Nikki DelZenero said. This is also the Maroons fifth straight win at home and the team has been a staunch 22–4 at Ratner Athletic Center since the 2008 season.

“The game against Wisconsin-Lutheran was a great win to get going into conference play,” Belak said.

The Maroons are optimistic for the UAA round-robin in St. Louis this weekend, and Wednesday’s win was definitely a confidence-booster. During the trip Chicago will face strong teams from fourth-ranked Emory, Case Western, and Rochester.

“We need solid defense, which we have had recently, aggressive offense, consistent serve [returns], and aggressive serving,” Belak said about the recipe for success. “We have great momentum going into the tournament and I believe this team is capable of greatness.”

The Maroons will face steep competition come Saturday morning when they face the UAA defending champion Emory team that is on a 16-game win streak and has been laying waste to opponents across the country for the past month. Chicago will encounter similarly strong teams in conference rivals Case Western and Rochester.

Walby admits, “Our conference is getting more and more competitive and we should have our hands full with every single match.” But if Chicago is able to triumph in these midseason tests, they will be favorites for the UAA championship, and then how sweet will be the barrens of winter.