At Goodman Theatre, a simple trick of fate

The Goodman Theatre stages Tennessee Williams's play, in which an aging actress and an aspiring actor grapple with the fleeting power that sexuality affords. 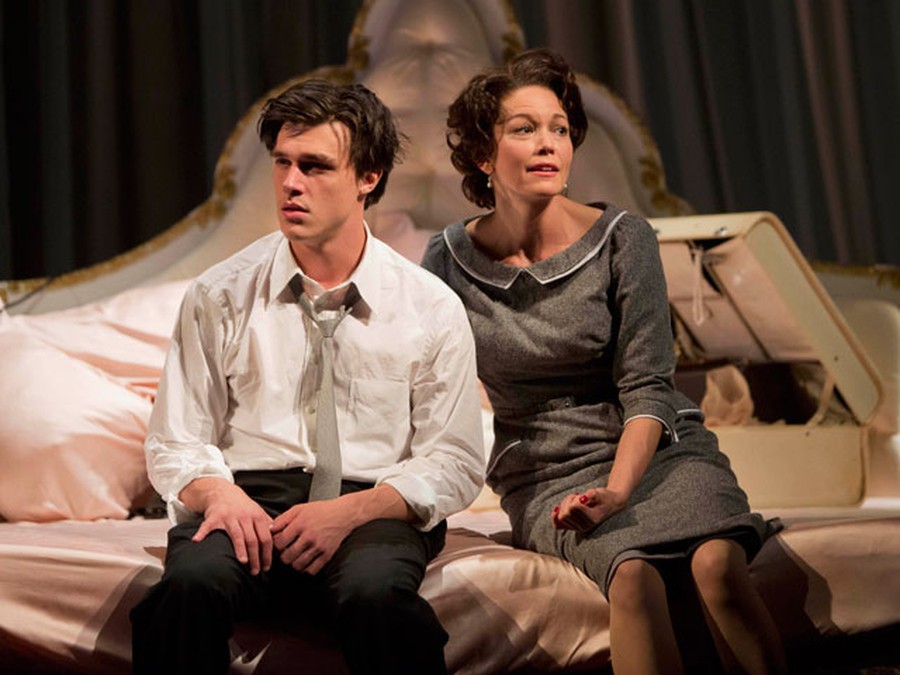 Though it’s rumored to be humanity’s oldest profession, prostitution still poses questions and problems in the Goodman Theatre’s production of Tennessee Williams’s Sweet Bird of Youth. Perhaps because there are no brothels or street corners, the sex-for-sale theme of the work remains recognizable and accordingly delivers a potent message to its audience. What’s more, there are no simulated sex or money exchanges on stage; the subtlety of the work underlines the nuances of modern prostitution. Sweet Bird of Youth highlights the power of youthful sexuality but also explores the inherent weakness in this ephemeral quality.

The play begins with an intimate dialogue in a very pink hotel bedroom between Chance Wayne (Finn Wittrock) and Alexandra Del Lago (Diane Lane). Chance is a young aspiring actor who works as a gigolo in order to finance his dream. Alexandra, who works under the false moniker Princess Kosmonoplis, is a middle-aged movie star who recently attempted a comeback, but thinks that her last chance at redemption has fallen flat. Chance has led Alexandra to his hometown so that he can continue to use her money and prestige while trying to reconnect with his high school sweetheart, Heavenly (Kristina Johnson). Alexandra seems too self-medicated to care about where she is, as long she has a trailing pretty-boy to care for her.

Both characters are monsters. Alexandra makes her narcissism all too clear, and Chance attempts to influence her. Diane Lane is marvelous as the fallen movie star, adding real panache to a character that could be unlikeable to watch. The tired persona she’s displayed in romantic comedies like Under the Tuscan Sun and Must Love Dogs disappears with a fantastic accent and full commitment to character. Lane’s performance has led many to believe that this show is Broadway-bound.

In its second and third act, the play moves from the intimate to the grandiose with two different scenes and sets involving many members from the town of St. Cloud, Florida. The play also moves from a timeless story of an older movie star and her young lover to a historically specific tale about Southern attitudes in the 1950s. As Chance leaves the hotel in order to find Heavenly, her father, Boss Finley (John Judd), plots his political career and the downfall of Chance. Finley defends the castration of a local black man and the preservation of Southern white virgins, touting his not-so-pure daughter as a shining example of a woman in need of protection.

Blinded by his love for Heavenly, Chance ignores the threats and warnings made by various townspeople, and opts instead to spin around St. Cloud in Alexandra’s convertible. Still, Chance acquires and loses more than he aimed for through his affairs with older wealthy women, especially in this last-ditch attempt to make it in Hollywood and win back his girl.

Director David Cromer uses multimedia elements, like a close-up of Lane’s face projected on the white gauze curtain and enlarged photos of a political rally. These additions work with the production’s commentary on Hollywood and the movie culture of the 1950s. In the final act, the set spins around with the characters on it, reinforcing Chance’s ceaseless jabs at fame, Alexandra’s continuous hope for a comeback, and the accidents that dole out their respective fates.