At Court Theatre, a Feast of Epiphany to be thankful for 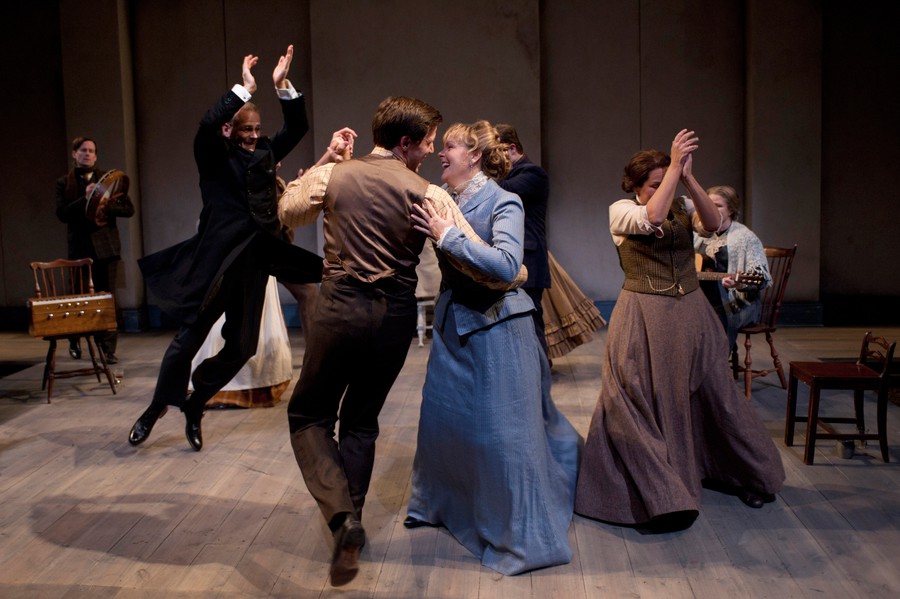 The Dead is a holiday musical largely in search of its own holiday spirit. The Court Theatre’s winter production, based on James Joyce’s masterful short story of the same name, is almost more puzzle than performance. There is little dialogue, less action, and almost no set to speak of. We are asked to join in the process of soul-searching by characters who scarcely know each other or themselves. But that’s also just how it should be.

The musical subtly twists the events of “The Dead” into a recollection: The stout, young Gabriel Conroy (Philip Earl Johnson) looks back on the annual Feast of Epiphany celebration held by his aunt Kate (Anne Gunn), aunt Julia (Mary Ernster), and cousin Mary Jane (Regina Leslie). Also in attendance are his wife Gretta (Susie McMonagle) and a few other family members and friends—all trying to enjoy some Christmastime cheer.

Beneath the surface, however, each is fraught with inner turmoil and self-doubt. This is especially true of Gabriel, as he lets us know from his very first lines that there is something he does not understand about his relationship with his wife.

Originally adapted by Richard Nelson and Shaun Davey, The Dead made its first appearance at Court back in 2002. But with this rendition, artistic director Charles Newell and musical director Doug Peck have decided to shake things up. For the first time, the characters play the instruments themselves, and the resulting scores come across as seamless extensions of the party and its attendants. It’s hard to imagine a musical version of “The Dead” succeeding otherwise.

Yet it’s also hard to resist finding fault when the musical diverges from Joyce’s original work. We miss out on many of the insecure ruminations of Gabriel; the resolute defiance of Miss Ivors (Lara Filip), for instance, brushes over the unsettling nuances her conversation with him might otherwise convey.

On the other hand, we’re given the addition of a literal death in the days after the party. It isn’t necessary, and its hyperbolic scene of mourning—the party guests reappear in black, standing solemnly together as funeral attendants—only throws a wrench into Joyce’s delicate treatment of what is “living” and what is “dead.”

Another clear departure from Joyce comes with the utter jubilance of the earlier musical numbers. The dinner guests sing and dance until they go red in the face, without exception. Freddy Malins (Rob Lindley) prances about in unabashed ecstasy, helping himself to another drink. Aunt June and Aunt Kate, despite their age, move fluidly in step as self-proclaimed “naughty girls.” Even hapless old Mrs. Malins (Rebecca Finnegan), who can’t seem to sit without hunching over, joins in on the action. These are revelers we can imagine truly enjoying this party year after year, not fretful figures tediously struggling to adhere to convention.

But ultimately these scenes only serve to heighten the tension between what lies on the surface and what lies beneath. The marked contrast between the jovial music and the gloomy, almost morbid musings in between exposes the former as nothing more than palpable desperation. We realize that the characters’ interactions with one another cannot always be taken as matters of fact. “You look so young,” Aunt Kate tells her sister, and yet clearly she does not.

Her face is ghostly pale, and when the performances do settle down, it bears a constant burden of concern. The performances are merely performances; when Aunt Julia, Gretta, Mrs. Malins, and the rest take turns staring grimly off into the same distant spot, their true dispositions come out.

Eventually The Dead does shift to reflect this mood. The music fades somberly into the background, as Gabriel’s emotional wanderings come to the fore. He feels desperate to get at “something,” and something substantive indeed arises in his closing epiphany—a Joycean moment of sudden realization that is stylistically faithful to the material that Nelson and Davey’s script is based upon.

As Gabriel finally comes to comprehend how detached he is from his wife, he is visibly humbled. His stance slowly collapses into a stoop, and his words break down into feeble babbling. Johnson gives us a gripping portrait of a man who is both pitiful and pitiable at once, brought to tears of his own as he watches Gretta’s fuller, more passionate sorrow. Still, what Gabriel realizes remains only “something” to us. As Johnson reprises his narrative role, he repeats, with heightening poignancy, the famously enigmatic last lines of Joyce’s short story. “The snow was general all over Ireland,” we are told, and yet we are also left to determine its meaning.

James Joyce's “The Dead” runs at the Court Theatre through December 9.