UchiNOMgo: Where my food trucks @? 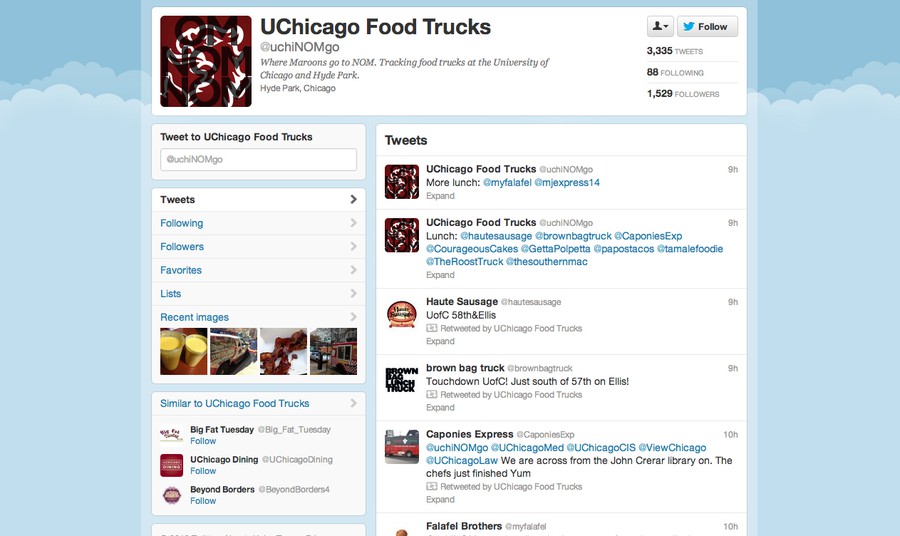 His Twitter page, @uchiNOMgo, has faithfully tracked the locations of restaurants on wheels around campus with more than 3,000 real-time tweets to an audience of over 1,500 followers since its creation last October.

In the early summer of 2011, Schwab began noticing four or five food trucks appearing around the University every week. As a veteran Tweeter and self-described foodie who considers food trucks the “pinnacle of foodie experience,” his impulse was to find and follow them on Twitter, but in lieu of using a personal account, he created @uchiNOMgo.

“It started both as a way for me to figure out what was going on but also to evangelize food trucks and get them to come to UChicago. The South Side is a location that gets left out of a lot of good things in the city, and so I wanted to make sure we didn’t miss out on this awesome new thing,” Schwab said.

A year later, the results of @uchiNOMgo’s mission are visible every day on the 5800 block of South Ellis Avenue: a maximum of 20 trucks that come to Hyde Park at different times, parked in rows and serving everything from wraps to doughnuts to sliders, all of which Schwab has sampled.

Schwab emphasizes that his mission is straightforward: track and attract. Spending no more than 10 minutes around lunchtime every day to scroll through his Twitter feed and eyeball the areas where the trucks coalesce (the 5800 block of South Ellis Avenue and in front of the Reg), Schwab simply tweets and retweets the truck names on campus and occasionally posts a picture of a new menu item. He draws the line at reviews, keeping criticism to himself or “DMs” (direct Twitter messages). In addition, @uchiNOMgo also functions as a method of recruitment, encouraging new trucks to drive by campus through following, tweeting, and “DM-ing.”

The marriage between social media and food trucks is hardly unique to @uchiNOMgo, as evidenced by the usage of Twitter as a means of communication for many food mobiles. There are about 65 food trucks running around Chicago, with the great majority of them tweeting.

“It’s actually a perfect relationship. Especially in Chicago, when it’s so hard to know what’s going on and the trucks are written tickets in the Loop and neighborhoods with aldermen who aren’t supportive. But it’s the perfect relationship because [Twitter] has become the go-to medium to communicate. It’s exactly what they need,” Schwab said.

Between the food truck owners and devotees like @uchiNOMgo, as well as the app Chicago Food Trucks Map, the Web site Food Truck Freak, and the blog Food Truck 50, a “sub-culture” and community of mobile foodies has emerged. Schwab points at this community as indicative of the modern phenomenon of relationships based on online correspondence.

“And it’s not creepy anymore somehow. These totally spontaneous conversations on Twitter lead to real world interactions,” he said.

Since creating @uchiNOMgo, Schwab has attended gatherings and parties celebrating food trucks, using food trucks, and discussing food trucks. Recently, he met with other webmasters and bloggers just to talk food trucks, debating the difference between gourmet trucks and the original iterations of low-cost fast food.

On a personal level, Schwab has forged a relationship with many of the truck owners and drivers who come to campus. After a Twitter conversation, he’ll try out the food as a regular customer and introduce himself as the man behind @uchiNOMgo. Sometimes, the trucks will offer him free samples but he prefers to avoid taking advantage of his Twitter fame because, after all, “they’re often small businesses making a living.”

Ultimately, operating @uchiNOMgo is “just a hobby” for Schwab, who works for the University’s Information Technology Services as his day job. “The satisfaction that I get is getting more food trucks and sampling more food trucks. It started off as a selfish thing but I guess now I view it as a service for other people. I grew up with comic book heroes and I like the idea of having an alter ego that finds great food.”