Valois hands out meals fit for a president 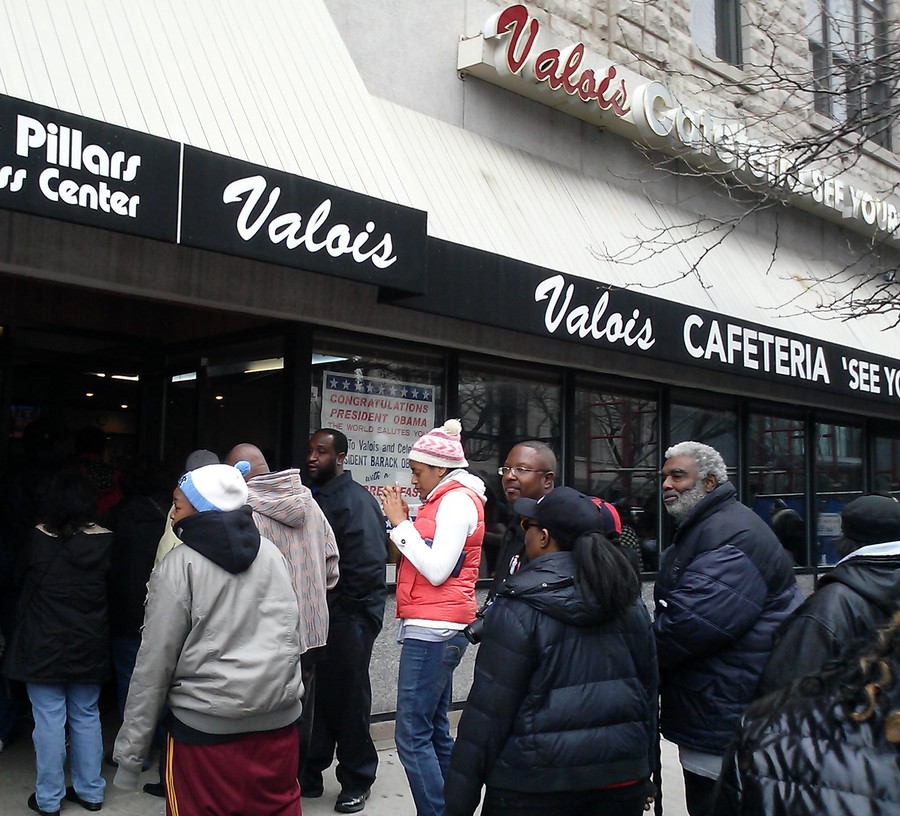 President Obama’s favorite restaurant gave out his favorite breakfast in celebration of his reelection Wednesday morning.

Valois, the Hyde Park diner famous for its cafeteria-style grub and POTUS approval, served breakfast on the house from 6 to 11 a.m., inviting hundreds of Chicagoans to feast upon the No. 2—two scrambled egg whites, turkey sausage, hash browns, and wheat toast.

In little over four hours, more than 700 had been served, with the line spanning a block and half from East 53rd Street and South Harper Avenue to Lake Park Avenue.

“[Valois] did it for Obama, for his people,” said Dimitrios Lathouris, who was cooking behind the counter Wednesday morning during the giveaway.

The morning after Election Day 2008, Valois also gave out free breakfast to a larger crowd and a tired President-elect Obama, who stopped by for a hot meal after his first win. Since then, Obama’s returns to the diner have been less frequent: His last publicized visit was in 2010 after a campaign rally on the Midway for Alexi Giannoulias’s bid for Obama’s old Senate seat.

“He doesn’t come here regularly anymore. I think he’s busy,” joked Jon Lathouris, a manager who has been at the restaurant for over 20 years.

Lathouris, who used to flip Obama’s eggs back when he frequented the restaurant, pointed to a wall next to the cash register with a photo of a smiling Obama, and said, “Yeah, I miss him, I miss my friend.”

The Lathouris brothers said that even those who were not supporters of Obama were welcome to enjoy the meal. The morning, however, was decidedly a moment of celebration and victory for Obama’s neighbors and supporters.

“This is very special for me,” Yolanda Willis, who had canvassed for Obama in Wisconsin, said. Willis has been a long-time fan of Valois and Obama. “We partied last night and we did what we had to do to keep him in the White House.”

“We were praying on our knees earlier last night and then we got up and thanked the Lord at the end of the night. This is so important for the neighborhood,” said Cowana Williams, a native Hyde Parker.

For Margo Steward, a Hyde Park native and Valois regular for over 25 years, the free celebratory meal was a change from her usual two pancakes, eggs over easy, and coffee. “It was a nice victory, you know?” she said as she waited in line.

Lacisha Dickens, from the far South Side, has never been to Valois but decided to trek north after a night of anticipation of election results, “but this makes it all better.”

In addition to breakfast, the President’s reelection offered a different business opportunity for Randolph McCollum, owner of Randy’s General Merchandise in Washington Park, who was selling T-shirts and celebrating Obama’s victory in his hometown.

“I knew without a reasonable doubt that Obama was going to win the election, and we had been campaigning for him up until the election,” he said. “We did some street vending and just talking about his policies, letting everybody know to give him a chance to dig out of the hole that he was given when he first started.”

He and Paul Cleveland had been selling t-shirts since 9 a.m., and already had them made because of their campaigning activities. Pointing to a t-shirt with Obama’s face on it for only $5, “In these hard economical times, we want to let people know that Obama understands,” McCollum said with a laugh.