A guard's nine hours of standing and solitude 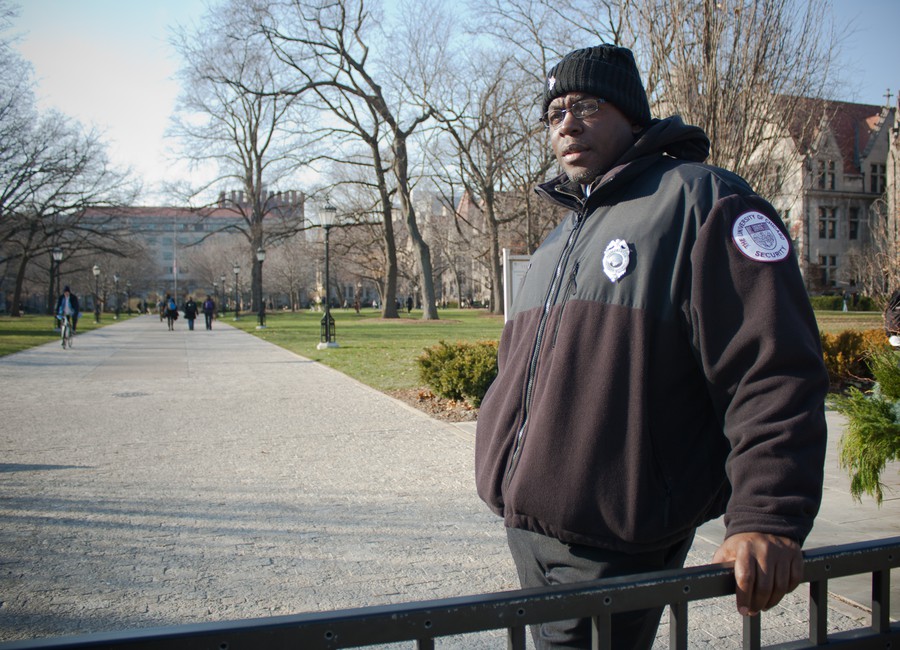 At 7 a.m., Carr begins his nine-hour shift as a security officer at the entrance of the main quad at East 58th Street and South University Avenue. Later in the day, Matthew Maciej takes his position for eight hours at the Apostolic Church parking lot on East 63rd Street and South Kenwood Avenue. They are on their feet for the entirety of their shift, and don’t always have daylight to keep them warm.

Both started out working the 4:00 p.m. to 2:00 a.m. shift that all new security officers are initially assigned. Especially in the wintertime, during what Carr refers to as “that brittle cold weather at 10 below,” the shift can be difficult to bear, though officers receive outerwear, pocket warmers, and may soon receive boots as parts of their uniforms.

“We look like criminals with a badge,” Carr said. “Face mask, warm boots, and plenty of layers.”

Both Carr and Maciej are employed by AlliedBarton Security Services, a privately owned security contractor. The private security force at the University of Chicago, which has been in place on campus since October 2010, currently stands at 125 officers and spans 20 exterior posts from East 57th to East 63rd Streets and South Blackstone Avenue to South Ellis Avenue.

According to Associate Vice President for Safety and Security and UCPD Chief Marlon Lynch, the UCPD saw a need for an increased security presence on campus in 2010, and decided to use the security officers to supplement their own activities. The security officers, distinct from UCPD, are not allowed to make arrests and generally do not physically intervene in situations. Instead, all officers carry portable radios, and their primary objectives are to observe and report.

“You teach people to be aware. You might have students from other countries who don’t know that you can’t just have electronics visible to the public. This actually is a nice neighborhood, but if you’re out there with your laptop open, that’s giving a meal to somebody who’s hungry,” Carr said.

According to Carl Reyes, an account manager at AlliedBarton who works primarily with Lynch and the University’s private security force, the presence of security guards alone can deter crime.

Both Maciej and Carr agreed that a potential assailant who saw security guards on the street would hesitate to commit a crime.

“When [criminals] see you, they think twice about doing something,” Maciej said.

“You’ll see two guys just walking along, then all of a sudden they see a security guard, and they’re like, ‘Oops,’ and they make a U-turn. Even if you know something would have happened, there’s nothing you can do,” Carr added.

Since the implementation of the security guard network across campus more than two years ago, however, the security guards have taken on more interactive duties such as actively providing help and advice to students and visitors.

“When they first started, they were just there. Now they’re trained to provide directions, be familiar with campus, be more proactive,” Lynch said. “They’re a lot more involved in what they’re doing.”

According to Lynch, the program and the extra layer of familiarity and security it provides have received good input from the Hyde Park community.

“The ones that are assigned here are dedicated to the U of C. It’s a lot more consistent. This is where they work,” Lynch said. “We’re pretty comfortable with the way it’s set up.”

Even so, the force and campus coverage are both still expanding. A new post at East 60th Street and South Dorchester Avenue was just added last Wednesday, and Reyes is enthusiastic about the possibility of increasing the number and density of officers.

“We hope to put more security officers in specific locations based on what we see and crime stats. Our goal is to keep on pushing them to the outer parts of campus.”

Ultimately, Carr hopes to rise through the ranks but for now, he enjoys being outside and helping the campus out as a security officer.

“It’s an area where you can help people that need that small help because of course, the police can’t do everything, so you can be the eyes and ears for the small crime that can be prevented before it even happens,” Carr said.