The 66-year-old Latke-Hamantash Debate is organized by two third-years and is scheduled to take place around Purim, the holiday of hamantash. 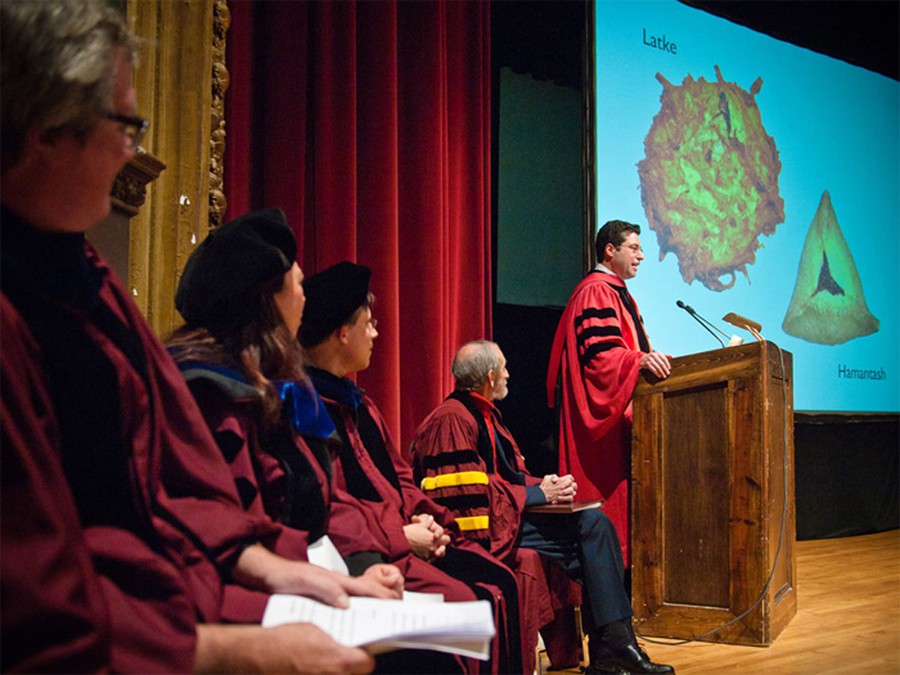 The Latke-Hamantash Debate will be student-run for the first time this year, as a group from Alpha Epsilon Pi (AEPi), a Jewish fraternity, has stepped in to organize the event.

This year’s debate will take place in Mandel Hall, with a post-debate nosh in Hutch Commons, around the time of Purim, the Jewish holiday when hamantashen are eaten, in mid-February.

Third-year AEPi members Eric Wessan and Jacob Rabinowitz approached the Newberger Hillel at the University of Chicago, traditionally the organizer of the event, in mid-October to express their interest in organizing the debate. They plan to reach out to other groups, Jewish and secular, and will also hold an open forum in the first week of winter quarter to assemble a team of student organizers for the AEPi-sponsored event.

While specific plans have not been made, Wessan said that they plan to maintain the current format of the debate, including the presence of moderator Ted Cohen, a professor of philosophy who has hosted the event for over 30 years. The only change will be the addition of a philanthropic element.

“We’re not sure exactly how we’re going to make this outreach, but we want to turn this event into a chance to raise money,” Wessan said. The exact charity has not been determined, although Wessan suggested that it might be one of the seven charities that the national AEPi organization is associated with, such as Save a Child’s Heart.

Since the group formed only a month and a half before the traditional date of the event on the Tuesday before Thanksgiving, near the Jewish holiday of Hanukkah when latkes are eaten, the date of the debate is being moved to February 12, just 11 days before Purim.

But even before students got involved in running the debate, Hillel was already planning to take the event in a new, more student-focused direction.

First held in 1946, the Latke-Hamantash Debate, a humorous event featuring arguments from professors about the respective merits of latkes and hamantashen, was originally organized by faculty members with the Hillel rabbi in order to appeal to the Jewish population at UChicago. Over the years the debate grew, moving from the Hillel building to Mandel Hall and attracting audiences from across the city.

Hillel took a larger role in planning the event as it got bigger, though the event is not solely identified with the Jewish organization but rather with the University as a whole, according to Ruth Fredman Cernea’s introduction in the essay collection The Great Latke-Hamantash Debate.

Interim Executive Director Andrea Hoffman, who was hired by Hillel in August, had been trying to encourage student input in the debate before it was taken over by AEPi.

“I was told that there weren’t students involved in the event, which I thought was strange because Hillel was about the students,” she said. “We wanted to invite faculty that students wanted here.”

However, before Wessan and Rabinowitz proposed taking over the organization of the event, some faculty members expressed discomfort with participating in this year’s debate due to the controversy surrounding the firing of former Executive Director of Hillel Dan Libenson last spring.

“One or two faculty members in particular who made a link there, they were stirring the pot,” Hoffman said, adding that Hillel never heard from Cohen about taking part in this year’s debate.

Wessan said that AEPi did not have trouble attracting professors to participate and that Cohen has signed on to moderate.

While the debate is student-led, Hoffman said that she, as well as other Jewish leaders on campus, will still play a role in advising the students.

“Officially all of us are working behind the scene with no public recognition at all; we’re going to let the students take center stage,” Hoffman said.

Libenson, current director of jUChicago, a Jewish interest RSO, said that his organization was not involved in the event and had not been contacted, although he said that any members of the group would be free to participate in organizing the debate.