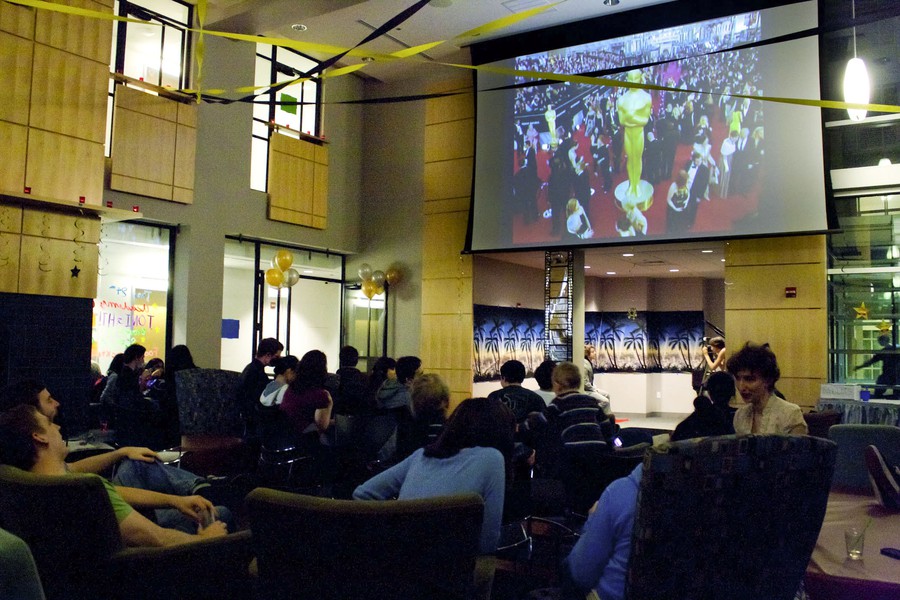 Personally, I’ll take any opportunity to dress up. Wearing heels to an event usually excites me more than the event itself. My perpetual desire to look fancy tends to reach its peak around Oscar time. Why can’t I spend an entire Sunday in my classiest clothes and get my picture taken so the world can appreciate them? It’s a dilemma that many people face.

Fortunately, a number of different dorms on campus took action, hosting Oscar parties for sartorially savvy youths this past Sunday. It’s become somewhat of a tradition. In Broadview’s Wick House for example, dressed up guests could choose to eat from nine different pizzas, each representing the nominated Best Pictures. But while each House has its own signature twist on the Oscar party, South Campus’s may just be the swankiest.

On Sunday at 6 p.m., the eve of the Oscars, people from every corner of South flocked to the west commons for the annual Oscars party organized by the South Campus West Dorm Council, comprised of representatives from Halperin, Kenwood, Keller, and DelGiorno houses. Second-year Sara Hupp, the president of the council, organized the event.

Those who dressed for the occasion were fully committed. Outfits were complete with dress shoes, ties, bow ties, lipstick, and that perfect necklace saved for special occasions. Even the smallest details were accounted for: Shirts were tucked in, hair was pinned up, and the classiness just effervesced.

The party itself fit the dress code flawlessly. Tables of food and drinks lined one wall, and I was invited to help myself. And then I saw them. Chocolate-covered strawberries. Possibly the greatest combination of fruit and chocolate ever invented. So I beelined to the plate. After grinning to myself for grabbing one of the few strawberries left, I looked at what else was on the tables. Cheese and crackers, vegetables and dip, shrimp cocktail, meatballs, and bruschetta—so many hors d’oeuvres. At an adjacent table, council members were serving an assortment of “mocktails,” complete with clear cup and crushed ice (because, really, how else could you drink a strawberry margarita?). As a testament to how good the food was, I never again managed to snag a chocolate-covered strawberry. I guess sitting down was my key mistake: Those smart people hovering over the tables, mingling with one eye on the kitchen, were one step ahead of the game.

The room itself was meticulously decorated. There were gold and silver balloons and streamers to match the color scheme of the ceremony. The windows were decorated with painted Oscars. The ceremony was projected on a large screen on the wall.

In one section of the room, behind the screen, was a makeshift red carpet leading to a tripod where second-year Lynn Garrett, the treasurer of the council, was taking pictures of students. Representatives of the four houses in the council would then judge the pictures and determine the best dressed guy and girl. First-year Quinn Quintanar, dressed in a suit and bluish purple tie,which matched his purple pinstriped shirt, and first-year Alex Opechowski, wearing gold studded black peep-toe heels, a short-sleeved black dress with a lace back, and red lipstick, were the lucky winners.

People also got to predict the winners for categories such as best picture, best leading actor, and best supporting actor, and other popular categories, at a ballot table. First place for the most predictions went to second-year Michael Reinhard, and second place went to first-year Stephanie Twellmeyer. All winners received $10 movie passes.

When the ceremony began, the general reaction was relatively underwhelming. People continued to mingle while sipping mock champagne, talking about that midterm they should really be studying for, and occasionally glancing at the screen. Others had their laptops out and let their eyes dance from one screen to the other. Other people just sat and socialized, commenting on how timeless George Clooney is or how nice Gwyneth Paltrow’s dress was.

In general, it seemed as if the Oscar party was more of an opportunity to bond then actually watch the ceremony. Even though the party was from 6-11 p.m., the number of people never dwindled.

This seems to be true for the other dorms on campus which offer yearly Oscars parties, as well: Christine Otte, the resident head of Stony Island, said that about half her house attends the Stony Island party, a five-year tradition that the resident heads have attempted to make a “fancy-shmancy” affair for the past four years.

One thing’s for certain; whether you come from South or Stony, watching the Oscars in fancy clothes with close friends certainly beats watching it alone in your pajamas.