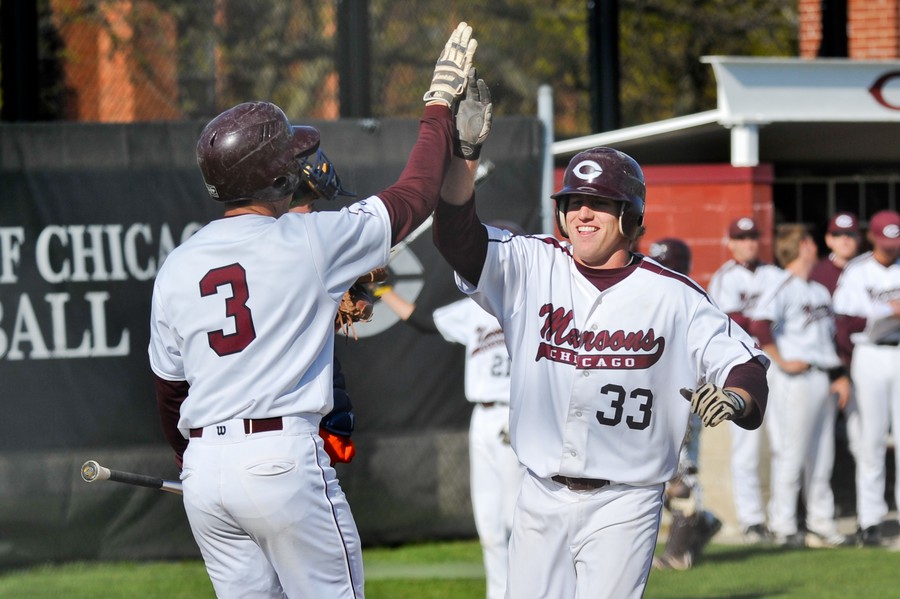 Three out of four’s not bad. For the Maroons (19–10) this past weekend, it seems impossible to spin their outcome in two doubleheaders at Wash U (24–11), one sweep and one split, in any other way. Over the course of a packed weekend, Chicago extended its road winning streak to five games before losing the second game of a doubleheader to the Bears late on Sunday afternoon.

Saturday belonged to the South Siders. They won the first game 5–2 and took the second 11–1. They captured the first half of Sunday’s split by a score of 7–1 before falling to the Bears 9–8 in extra innings for their first loss in their past six games.

“We had a great weekend,” second-year outfielder Ricky Troncelliti said.

A great weekend, indeed. The first game on Saturday was a come-from-behind victory for the Maroons. Down an early two runs, they rallied to tie the score late in the game, forcing extra innings. In the top of the ninth, they plated three runs on an RBI fielder’s choice from third-year infielder J.R. Lopez, an RBI single from fourth-year catcher Stephen Williams, and an error from Wash U’s shortstop that allowed Lopez to scamper home. Second-year William Katzka finished the Bears off with his sixth save of the year.

The Maroons came out swinging a little while later in the second game. They scored a quick run on a sacrifice fly from Lopez, but starter Alex Terry gave up a run in the bottom of the first. That run would be the only one he would yield throughout the course of his complete-game performance. Chicago took the lead for good in the top of the third. Williams’ RBI double highlighted the inning.

Chicago’s superb pitching continued into the first game on Sunday, when second-year Claude Lockhart’s complete-game mimicked Terry’s. Lockhart, too, gave up an early run in the first and none after that. This time, though, the Maroons did not score until the sixth, when an offensive outburst led to seven runs. First-year infielder Kyle Engel’s three-run double broke the game open.

All good things must come to an end, though. For Chicago, that end came in the second game on Sunday. The Maroons got on the board early with two runs in the first, and were still leading 2–0 heading into the bottom of the fourth. But the Maroons’ staff gave up seven runs in the fourth and fifth innings combined, a stark contrast to their earlier string of 1-run performances. Thanks to an offensive outburst in the top of the fifth that helped keep the game close, the South Siders were able to push the game into extra innings, but Katzka allowed a run in the bottom of the eighth that gave Wash U a walk-off win and Katzka his second loss of the season.

Despite that heartbreaking loss in the final game, there’s no question it was a successful weekend for the team.

“We beat a real quality opponent three out of four times and to make it even sweeter, it was Wash U,” Troncelliti said. “We got awesome starting pitching and the offense really stepped up with timely hits.”

The Maroons will try to keep the momentum from their three victories heading into a tough week. Coming off of a busy weekend, Chicago plays two games in a row this week, today and tomorrow. This afternoon, they take on Elmhurst (17–13). Tomorrow, they will face off against North Park (24–9). Both teams have played good seasons thus far, but the Maroons proved this weekend that they can hang with the best of them.

“We have some big games this week and the momentum from this weekend should help keep us rolling,” Troncelliti said.

Chicago will try to rebound from their loss this afternoon at J. Kyle Anderson Field at 3:30 p.m., and will be back at it again tomorrow at 3 p.m.