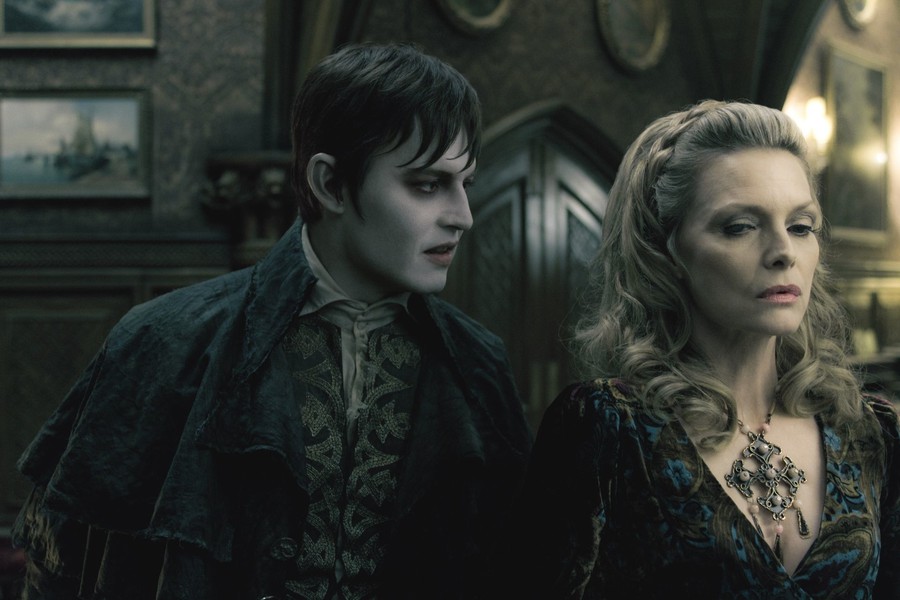 This isn’t the first time that Hollywood has tried to remake Dark Shadows, a popular ’60s gothic soap opera; the series has been revamped on television twice and Burton’s remake is the fourth movie version of the cult darling, which has attracted fans as famous as Madonna and Quentin Tarantino.

Version 4.0 of Dark Shadows stars Johnny Depp as Barnabas Collins, an 18th-century playboy who discovers that he can only break so many hearts before his own stops beating. Unfortunately, Barnabas has to learn this lesson the hard way when his latest and last love interest, Angelique Bouchard, turns out to be a beauty of the underworld. Angelique is, quite literally, an “ex-girlfriend from hell”: She reacts to Barnabas’s break-up by turning him into a vampire, murdering his parents, cursing his whole family, and burying him ‘alive’ for all eternity (or so she thinks).

A team of construction workers accidentally unearths Barnabas’ body in 1972. Famished, the undead Barnabas immediately kills his discoverers and proceeds to make his way back to his family’s once-majestic Collinwood Manor. He finds his dear old home in a grave state of disrepair, the chaos all the more dire for its dysfunctional and impoverished occupants. Barnabas vows to restore his family name and fortune, and for the rest of the film he manages to run into his ex-girlfriend, have a humorously hard time trying to adjust to life in the technological, trippy, and televised 20th century, and makes awkward comments about a 15-year-old’s “fertile birthing hips.”

First, the good: Burton distributes his props carefully, develops detailed sets, and adorns his characters in unquestionably complex costumes and makeup looks. This gives the mansion in Dark Shadows an evocative level of rococo-style decadence. Unlike rococo, though, each little nook and cranny of the mansion still serves a purpose, lending the manor a quirky, gothic mystique that is at once magical and fun.

If only the film’s plot, dialogue, and character development were done in the same way! Depp and decorations carry the entire film; Helen Bonham Carter and Michelle Pfeiffer deserve honorable mentions. Unfortunately, that’s all that there really is to the film—Depp, scenery, Carter, and Pfeiffer. And neither woman plays Depp’s bewitching (or perhaps just bitching) ex.

The lack of inventiveness in Dark Shadows is surprisingly unrelated to its ’60s soap opera foundations. Practically all of the film’s humor can be attributed to either Barnabas’s gaffes or jabs at contemporary pop culture, both of which are convenient tactics until he overused them.

Of course, most of Burton’s films are about an outsider journeying into a familiar—though for him, frighteningly foreign—realm. Besides Dark Shadows, Burton has directed a number of such films, including Batman, Beetlejuice, Edward Scissorhands, and Pee-wee’s Big Adventure. Burton’s films are the definition of “forever alone.” Yet Depp’s hackneyed antics in Dark Shadows take the film to strangely uninspired levels. It’s Edward Scissorhands stripped of all its quirks and charm. It’s a best-lines-are-in-the-trailer kind of movie that desperately wants to prove something, but doesn’t really know what that ‘something’ is.

It’s the tale of an outsider looking in with so many era and pop-culture based detours that it loses sight of what he’s actually looking for. To make up for its lack of direction, the film packs in so many pop culture references that one begins to wonder whether Burton is simply trying to prove that he isn’t past his prime. All this film’s rushed and underdeveloped ending proves is that the ever-impressive Johnny Depp can carry any film, with or without a storyline.

Dark Shadows sees Burton, like Barnabas, endeavor desperately to ‘get with the times’ of the new generation and try too hard to restore his name. But unlike Barnabas, Burton, having spent the past several decades directing-producing some of this generation’s best films, has nothing to restore.