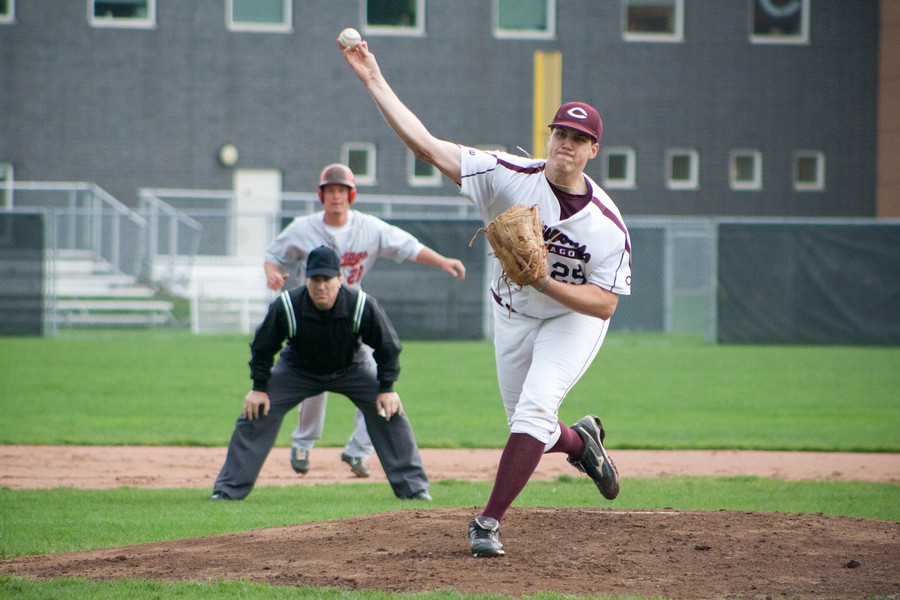 Casey Stengel once said, “There are three things you can do in a baseball game. You can win, or you can lose, or it can rain.” The Maroons (22–12) continued their raining streak on Sunday, as their game against Carthage (21–17) was postponed. The game was stopped in the middle of the second inning and never resumed. It was Chicago’s final home game of the season, and its Senior Day.

“It was really great to have Senior Day. The three of them have had such a huge impact on our program and moving it in the right direction,” second-year rightfielder Brett Huff said. “It’s great to play with them, and we’ll miss them a lot next year.”

Later today, the South Siders will go up Lake Shore Drive into Evanston to play Northwestern (16–29). The bulk of the Wildcats’ losses have come against Big Ten opponents. They are 5–16 in those games.

Northwestern certainly poses a challenge to DIII Chicago, but the 13 non–Big Ten losses that Northwestern has suffered—as well as the Wildcats’ 5–8 home record—should come as consolation and, furthermore, provide hope.

Northwestern has lost three games in a row, all to Ohio State. They lost those games 3–1, 7–1, and 4–1. Their last two wins came against Northern Illinois and Oakland on May 1 and May 2. Conversely, the Maroons have won eight of their past 11 games.

“The Northwestern game is always a fun game, as playing a team with that much talent is always a challenge,” second-year centerfielder and designated hitter Ricky Troncelliti said.

“Hopefully that will help prepare us for our potential postseason games.

“The game against Northwestern is a great way to end the season,” Huff said, “and hopefully we can end off on the right foot.”

The teams’ only mutual opponent this season would have been North Central, but the Wildcats’ game against that squad was cancelled.

In terms of postseason, the Maroons won’t know where they stand until May 14.

“We’re pretty optimistic about our chances of making playoffs and we’ll find out on Monday,” Huff said. “We’ve put ourselves in a good position.”

“It’s always tough to lose three players like our seniors,” Troncelliti said, “and hopefully we can continue their careers with a playoff run.”

The first pitch in Evanston is scheduled for 3 p.m. this afternoon.

The game against Carthage will not be made up.