FOTA launches an exposé of high heels and high art

In the upcoming days, The Festival of the Arts will expose the artistic talent of the student body. 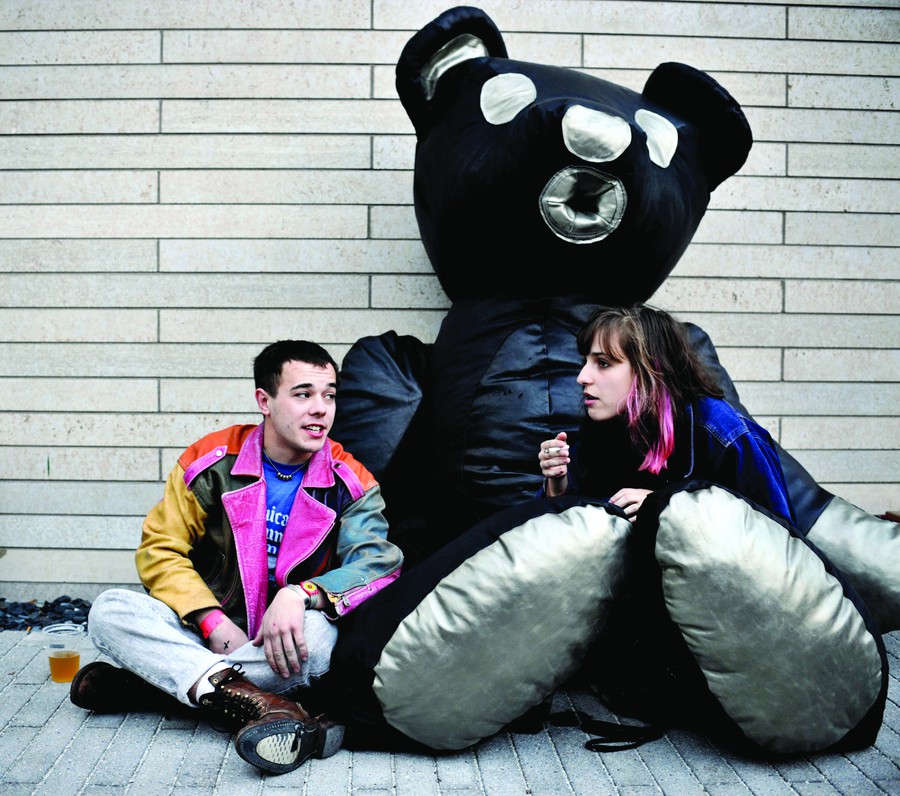 It’s fitting that the theme of this year’s Festival of the Arts (FOTA) is “Exposure;” Saturday night’s launch party at the Logan Arts Center gave a tailored but titillating sneak peek into the inner workings of select student artists. The combination dance party and fashion show kicked off FOTA, a ten-day celebration of the arts that includes works from the theater, film, dance, music, visual arts, and fashion traditions. The week showcases the work of campus artists, whose projects FOTA funds with grant money.

While the event has previously been held in Hutch Courtyard, this year FOTA had the opportunity to host the party in the Logan Art Center’s courtyard. Shola Farber, FOTA’s executive director, was thrilled about this new venue. “It’s centrally located,” she said, “so people committed to the arts come by even if they hadn’t heard about it.”

From undergrads to MFA students, the gathering attracted a diverse range of campus types. As guests ate dinner from the buffet provided by Rajun Cajun and Nathan’s, they could admire the innovative student artwork all around them.

Made specifically for FOTA, the artwork displayed in various areas of the tented courtyard highlighted the disparate interests of the student body. David Nasca’s project, for example, was a giant leather teddy bear that the fourth year visual arts major sewed himself. Fourth-year Michelle Bentsman hung empty cartons of milk and draped flowers on a female mannequin for “Fertility Goddess,” while fourth-year May Yeung, in a cheeky nod to our Internet-saturated world, made a large wooden hashtag sculpture titled “#UChicago.”

Around 8 p.m, all of the guests congregated around a runway in the center of the courtyard for the fashion show. Fourth-year DJs Quentin Roseborough and Joey Vasquez played upbeat music while an estimated 40 U of C students walked down the runway wearing designs made by fellow students. Despite a few wobbly walks, the models’ clothes impressed the crowd, with all the designs offering up something unusual. One male model, for example, wore a straggly blond wig and a shirt and bra made of soda cans.The experimental fashion show correlated nicely with the high energy and avant-garde vibe of the event, which culminated in a dance party where Roseborough and Vasquez played a mix of electropop and dubstep. A small but very enthusiastic group of people kept the party happening. The event also featured an appearance by the GlitterGuts photo booth, a traveling photographer who takes pictures at parties and events throughout Chicago.

FOTA has plenty in store for everyone, including those who have no artistic aspirations whatsoever. On Tuesday, fourth-year Coby Ashpis, Squat the Condos lead singer and guitarist, will perform the original piece “Space Prostitute,” with a group of local musicians. Described by Farber as “not quite musical but not quite theater,” it will feature a story told through both song and music. Then,on Wednesday, there will be a dance showcase composed of four acts: two performances by UChicago Maya, a fusion dance crew on campus; one by FOTA’s own artistic director Adrienne Swan; and another by the World Performance Team, a local nonprofit that teaches dance to inner city boys ages 7–14.

In addition to these performances, FOTA will sponsor a reception for the student artists on Thursday at the Smart Museum, and on Friday there will be figure drawing on the Main Quad. In conjunction with the Logan Center, FOTA will also host an open mic night series called the Tower Cabaret on May 11, 17 and 26, which will showcase both student bands and bands from around Chicago. The week culminates on Saturday at the Logan Center with “Arts Apocalypse,” a pop-up exhibit featuring over 50 performances, installations ,and miscellany that, if all goes well, will put an end to the world (of arts) as we know it. Luckily, if the raw, unrelenting exposure to pure artistic power becomes too overwhelming, there will be a big leather teddy bear on campus for all to cuddle.