Race, rhetoric, and a crowd at West-Dix talk 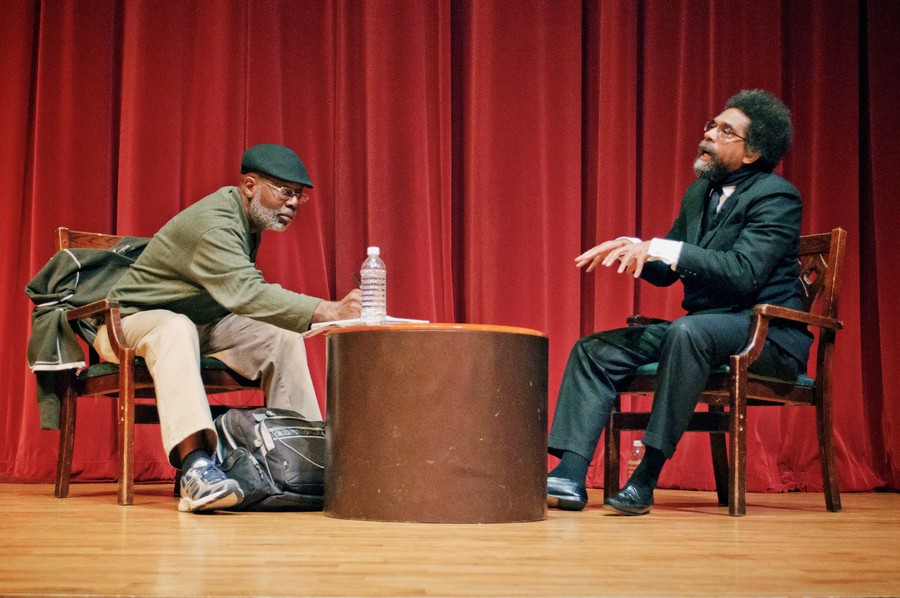 Cornel West, a leading racial theorist and a visible public intellectual, and Carl Dix, a founding member of the Revolutionary Communist Party (RCP), spoke on social injustice and revolutionary politics before a full house last night in Mandel Hall, in a talk billed “What Future for Our Youth?”

“This is an important conversation we are having tonight,” Dix opened. “Spin the globe and stop it with your finger. Anywhere you land, there is unspeakable horror: abject poverty, starvation, sex trafficking.... That is our world.”

Yet Dix saw potential in the future. “We are in a time of heightened attack, but also one of heightened resistance. We use that momentum to envision a world entirely different from that of today—one without all its horrors,” Dix said.

To Dix, communist revolution is the only way to fully eradicate today’s social problems. Dix identified injustice in New York City’s “stop and frisk” policy, the nation’s incarceration rates, and the recent murder of Trayvon Martin (whom he evoked by wearing a black hoodie onstage). He linked these back to American capitalism and imperialism.

Although he praised the Occupy movement, he thought it did not go far enough. “Now we’ve finally recognized the inequality, but the next question is what do we do about it?” Dix said.

He is also closely tied with Bob Avakian, chairman of the RCP, whose adherents regularly hand out fliers on campus.

West, taking a different approach, praised democracy as a workable system, despite its shortcomings. “Our task is critically examining our every assumption. Deep prejudices need to be critically scrutinized. They need to be ‘Socratized,’” West said, referring to Socrates’ vision of the “examined life” in the Apology.

“The fundamental problem of today is oligarchy and greed run amok. We have to decide which side we’re on,” West said.

West saw Occupy as a triumph of democracy rather than a step towards communism. “It’s about finding one’s voice in the midst of cacophony, in terror and catastrophe,” he said.

Hailed as a loud voice for justice by some, West has also been criticized as a polemicist posing as a philosopher. Former President of Harvard University Lawrence Summers reproached West, then a University Professor, for recording a rap album and campaigning instead of doing serious scholarship.

Both speakers exhorted the audience to action as the way to their desired future.

“If we respond to present injustice with silence, we’ll have one outcome. If we meet it with determined resistance, we’ll have another,” Dix said. “Today we help write that better future.”

West was guarded, but hopeful.

“The future is open-ended and entirely unpredictable. Who would have seen Occupy coming? Who would have thought that in this country of all places we would be scrutinizing the capitalist system so radically?” West said. “For better or for worse, the future depends entirely on the choices we make now.” 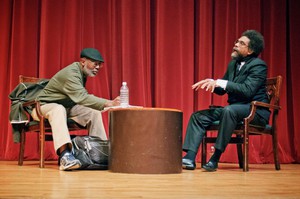 Julia Reinitz
West last came to give the annual Kent Lecture for the Organization of Black Students in 2006, also to a jam-packed Mandel Hall. But organizers feared that this year’s event might have been in jeopardy after the University withdrew sponsorship, citing poor planning, said first-year Matthew Cason, who helped put together the event.

When the University pulled its support, the petition read, “This university’s commitment to this value was undermined,”

In an April 27 e-mail, Dean of Students Kim Goff-Crews wrote that the event was put on hold after faculty expressed concern about the logistics of the event. The issue was resolved by April 30. Nearly 20 RSOs and affiliates sponsored the talk, which was organized by a student committee, and Chair of political science Bernard Harcourt moderated.