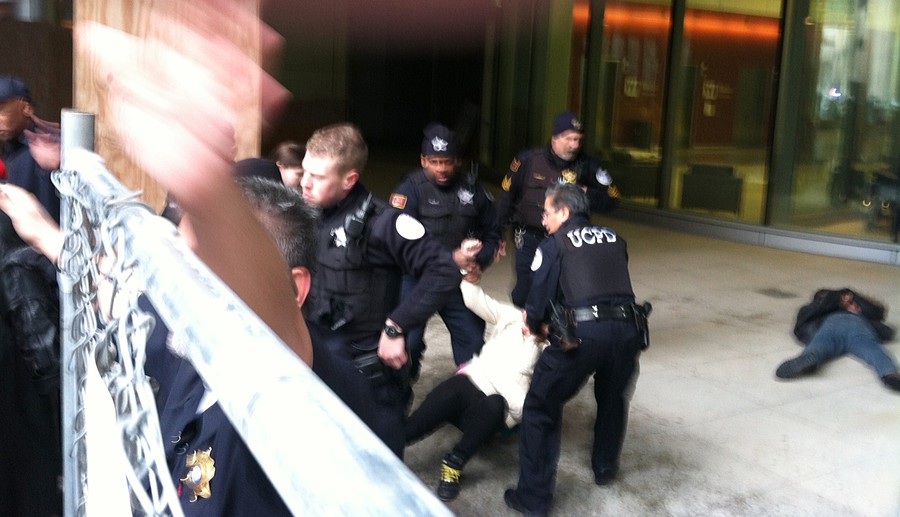 Courtesy of Students for Health Equity

The University of Chicago Police Department (UCPD) broke up a demonstration at the new hospital building on Sunday, arresting and pressing misdemeanor criminal trespassing charges on four of the participants, including a University graduate student, a College alum, and a minor. The demonstration was in protest of the lack of an adult trauma care facility at the UCMC in light of the $700 million spent by the University on the Center for Care and Discovery.

Protesters from the South Side organization Southsiders Together Organizing for Power (STOP) and their youth group affiliate, Fearless Leading by the Youth (FLY), organized the sit-in at the new hospital building, set to open February 23. The sit-in was also attended by members of the group Students for Health Equity (SHE), which comprises students from the College. A small group of the protesters were prepared to be arrested during the occupation of the hospital property, according to Darius Lightfoot, co-founder of FLY. Two of the arrested protesters, Alex Goldenberg and a 17-year-old local high school student, were part of this group.

According to several protesters, the situation became violent a few minutes after the declaration of the protesters’ intentions to peacefully occupy the building, around 2:10 p.m. Fourth-year SHE member Nastasia Tangherlini said the group of protesters had been prepared for UCPD to ask participants several times to move and then threaten arrest if they did not comply as they had during the two former sit-ins she had participated in. She said she was shocked by the rapid escalation.

Tangherlini said the protesters were holding signs when UCPD formed a line and pushed everyone out the door of the hospital. She sat down in the doorway because she was one of five protesters who had prepared to be arrested.

“I sat down in the doorway and they started trampling us [Tangherlini and FLY member Veronica Moore]. Telling us it’s a health violation, it’s a code violation—if there’s anybody that gets trampled, it’s going to be because of you,” she said.

“I looked at him [the police officer] and said, ‘I want the Dean-on-Call.’ He said he’d call him in a second ‘as long as you get out,’ and I said, ‘No, I want you to call the Dean-on-Call now,’ and he said no and then he picked me up and threw me out of the door,” she said.

According to Moore, Sheila Rush, mother of the late Damian Turner, whose death inspired the trauma center campaign, was hit to the ground by UCPD.

“It was a very brutal protest today,” Rush said, crying.

Moore and Tangherlini were among those who faced aggression by the UCPD but were able to move beyond the immediate sidewalk of the hospital entrance.

Losier, an eighth-year graduate student in the history department, was the designated police liaison between the protesters and the UCPD. He was arrested during the sit-in and charged with a misdemeanor of resisting arrest, though he was not part of the group that intended to be arrested.

As the designated police liaison, Losier’s responsibility was to inform UCPD that he and some of the other protesters were University students and to ask that the Dean-on-Call immediately come to the scene, he explained.

“They asked from the outset who was in charge, and I moved forward and said, ‘Look, I’m not in charge but I just wanted to…communicate the situation, like how many people we have…how [the protesters] are approaching the situation,’” Losier said.

As Losier moved to comply with police instructions to leave the building, an officer grabbed his hand. Losier asked for the Dean-on-Call as another officer grabbed his other hand and started arresting him. A third officer pushed him to the ground as he continued to say he would like to speak to the Dean-on-Call. The officers then held Losier to the ground for almost five minutes.

Losier lay facedown on the ground, where he said he remained for five minutes out of shock for what had occurred. According to Tangherlini, he did not resist arrest.

Losier attributed possible miscommunication with UCPD officers regarding his role as police liaison to the loud noises in the area.

“It was a small and close space, there was a lot of chanting, there was a bull-horn. I talked to one of the officers later and he was like, ‘Well I couldn’t quite hear you, so it was […] really hard to have a conversation,’” he said.

Alex Goldenberg (A.B. ’06), director of STOP, and Jacob Klippenstein, a cameraman, were among the four arrested of nearly 30 protesters who were forcibly removed by UCPD from the new hospital facility.

“If so many were in the building that was off-limits, how come there were only a couple of us that were charged with being unlawfully in the building?” Losier said.

None of the UCPD officers present at the protest answered requests to comment on the incident. Chicago Police Department (CPD) officers were present at the demonstration after protesters were removed from the building. According to CPD officer Francis Frye, they were there to offer support to UCPD.

“They don’t have the expertise in dealing with crowds,” Frye said. “[UCPD] is finally getting a taste of what it means to be police.”

After being arrested, Losier, Goldenberg, Klippenstein, and a fourth protester were taken to a CPD station on the corner of West 51st Street and South Wentworth Avenue around 3 p.m.

Goldenberg said he was not read his Miranda rights upon arrest or at any other point during his detention. Defendants were not allowed access to their lawyer, Ben Meyer, until midnight, and three were held without charges until that time. The minor was released to a juvenile facility for processing around 9 p.m.

Goldenberg said that he and Klippenstein were kept in an interrogation room for nearly 10 hours, handcuffed to benches the entire time. Losier was held in a separate room under similar conditions. After the police reports had been completed by the CPD, they were all locked up, Losier said.

The three were held until about 3 a.m. when they were released on an I-bond, or a promise to appear in court on February 26, Goldenberg said.

Losier said that he was most disheartened and frustrated that the hospital administration has yet to speak directly to protesters during trauma center protests.

“The UCPD is put in a difficult position because rather than being mediators, they are in a situation where they are effectively kind of pushing and shoving people out of the way rather than facilitating an opportunity for there to be some sort of dialogue between [the UCMC and protesters],” he said.

“At the end of the day, I think this sort of situation that happened yesterday is bound to happen with folks from the hospital continuing to not actually try to engage with the people who are raising concerns about the policies.”

The ordeal prompted STOP member and seventh-year anthropology graduate student Duff Morton to write a petition demanding that the University explain the violence perpetrated against the protesters by UCPD officers, drop the charges on the arrested, and increase communication with the community regarding the protest and trauma center. Since Morton posted the petition on change.org Sunday evening, it has received over 1,100 signatures.

The delivery of the petition to Vasquez and the UCMC was preluded by a press conference on the steps of the Administration Building, where speakers made their case for both UCPD accountability regarding the violence and arrests, and the right of community members to a trauma center. Local media were in attendance.

Lorna Wong, Assistant Director of Media and Social Media at the UCMC, declined to comment on what she referred to as the “police brutality” by UCPD officers during the protest.

UCMC issued a statement in response to the protest.

“The University of Chicago Medical Center supports the City of Chicago’s Trauma Care Network, which has the best pre-hospital emergency care, provides trauma victims with the most rapidly available treatment, and coordinates transport to trauma centers throughout the city. The Medical Center also abides by the Illinois Department of Public Health’s guidelines of a pediatric trauma center, which is to provide care for trauma victims up to age 15,” the statement said.

The University issued a statement regarding the arrests, writing, “University officials are working to better understand and address the incident, including reviews of video recorded at the scene and interviews with witnesses. University of Chicago Police have initiated a review as part of the department’s normal procedures.”

The University News Office did not answer the Maroon’s questions regarding the UCPD’s response during the protest.

Losier said he believes that the UCPD reaction was racially influenced.

“I don’t think I would have been treated the same way, in terms of being tackled to the floor and what have you, if I wasn’t a large African-American male,” he said. “I mean, to be in the situation and to [be tackled] at the same that I’m asking to speak to the Dean-on-Call because there’s this other student that’s being trampled on seems a bit ridiculous.”

University officials, including Assistant Vice President for Student Life Eleanor Daugherty and UCPD Chief Marlon Lynch, were in discussions with Student Government (SG) on Monday regarding how to construct an ongoing dialogue between concerned students and administration, according to Douglas Everson, SG VP for Administration. Although early in the planning stages, SG is hoping to tackle the issue with a three-pronged approach including small discussion groups between SG and student organizations like the Organization of Black Students and the Office of Multicultural Student Affairs, a campus-wide forum SG hopes to host Sixth Week, and a long-term method of keeping communication about race issues on campus open.