Seven inducted into University’s Hall of Fame class of 2013 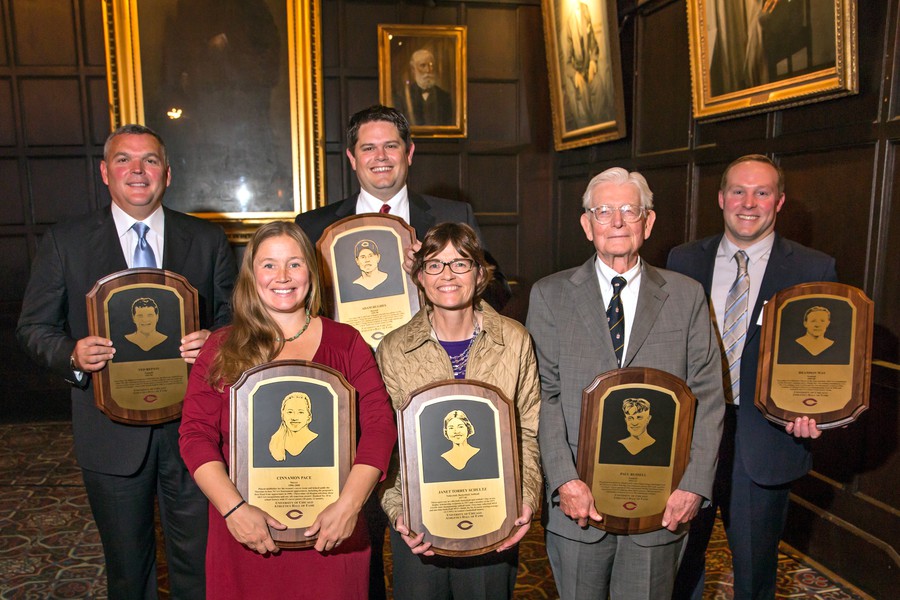 Let’s play a word association game. When someone says “college sports,” what comes to mind? Humility, honor, integrity, and gratitude aren’t words often used to describe collegiate athletic programs these days, what with all the scandals swirling around, but the University of Chicago took the time last Friday to remember some of its athletes who, as well as excelling on the field, did embody those words.

Seven former athletes were inducted into the 11th class of the UChicago Athletics Hall of Fame on Friday night. The inductees were Adam Hughes (A.B. ’98), Cinnamon Pace (A.B. ’00), Gary Pearson (S.B. ’60, SM ’63), Ted Repass (A.B. ’87), Paul Russell (Ph.B. ’16), Janet Torrey Schultz (A.B. ’81), and Brandon Way (A.B. ’99). Their statistics and accolades are impressive, but none gave any indication that those achievements were more important than the camaraderie they’d had with their teammates, the wisdom gained from the tutelage of their coaches, and the life values they’d learned balancing academic and athletic examinations at UChicago.

The evening began in the McCormick Tribune Lounge where the inductees, their friends, their family, and other University dignitaries mingled and recounted the memories that they had made during their time at UChicago. Many of the inductees felt strongly about the University’s role in shaping the ethos of college sports.

“I arrived at the University five years after Title IX. In fact, my high school didn’t even have a basketball team,” said Schultz, a volleyball, basketball, and softball star .

Schultz was a recipient of a Dudley Scholarship in 1977, a scholarship initiative started to attract more female student-athletes. “When I first saw an article about the [positive] treatment of female athletes at the UChicago in Parade Magazine, I didn’t know much about the University. The notion of offering women athletic scholarships was unheard of; it was like a Shangri-La for women’s sports,” said Schultz.

One sentiment that was shared by all the inductees was the importance of their teammates.

“I come from a team sport. Individual honors are touching but undeserved,” said Cinnamon Pace (A.B. ’00), who helped lead women’s soccer to its first Final Four tournament in 1996. “The women I played with during my years here are still my best friends. These are relationships I wouldn’t have otherwise had.”

“I had a great relationship with Coach [Brian] Baldea, he was really cognizant of the importance of our academics and how we managed our time,” said pitching ace Adam Hughes (A.B. ’97). “But there were a lot of other great guys too. In fact my best friendship was with my catcher. We started out our first year together, and he caught all of my games until the very end.” The catcher, Jaired Stallard, remains one of his closest friends.

“The victories and league championships were great, but what really made the experience special were the little moments celebrating with teammates. Even accomplishing small things, such as getting a first down, was enhanced by the shared camaraderie,” said two-time UAA Offensive Player of the Year and running back Brandon Way (A.B. ’99). “It’s a great feeling seeing guys I played with 15 years ago put their lives on hold, get the babysitters, and come from all across the country just to share this moment. It’s special.”

During their speeches, the athletes continued to express humility and gratitude to those who had contributed to the success of their athletic careers.

“I’m grateful, I’m honored, and I’m humbled,” said record-holding linebacker Ted Repass (A.B. ’87). “Humbled that every day, I got to interact with brilliant people who also had great character in their actions and decisions, and absolutely wonderful depth.”

After a medley from the UChicago Men’s A Capella Choir, the festivities at the Reynolds Club concluded.