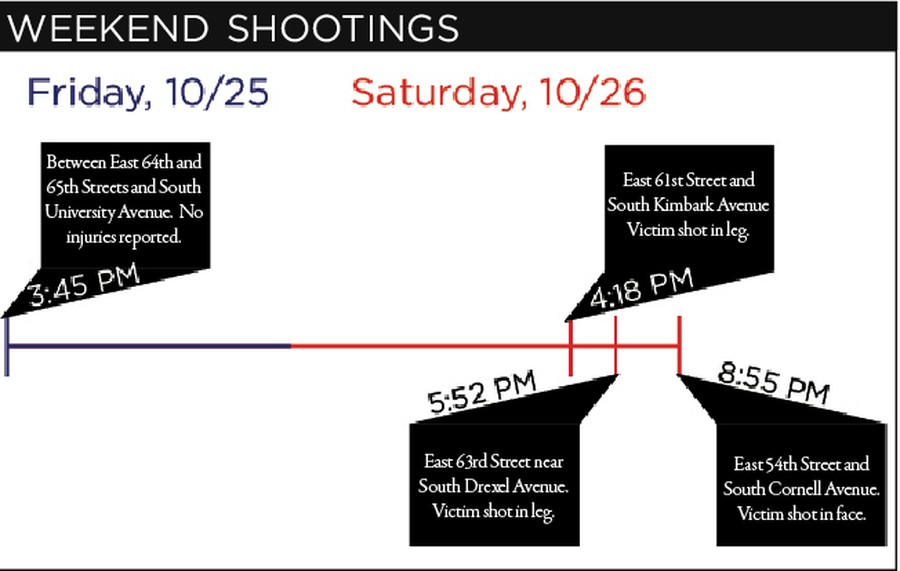 Over the past five days, multiple shootings have occurred in the Hyde Park and Woodlawn neighborhoods. The locations of the incidents border the University campus.

According to Chicago Police Department (CPD) spokesman Mike Sullivan, a black male roughly 20 years old was shot at 4:18 p.m. on Saturday in an alley close to the corner of East 61st Street and South Kimbark Avenue. The man, who sustained several shots to his leg, was in critical condition at Northwestern Memorial Hospital as of Monday afternoon.

Fewer than 30 hours later, at 8:55 p.m. on Sunday, a black male in his 50s was shot at East 54th Street and South Cornell Avenue, as a result of a previous altercation. The man, who sustained gunshots to the face, is also currently in critical condition at Northwestern Memorial.

While the CPD’s investigations of the shootings are pending, Sullivan said that he believes the incidents are unrelated to each other and that the victims in both cases are not connected to the University of Chicago.

“At this point, these shootings just seem random. Regarding those two incidents, we have no suspects in custody. We also do not know of any possible motive [for the shootings],” Sullivan said.

As of press time, the CPD has not detained any suspected perpetrators of the shootings. However, according to the UChicago Crime Feed Twitter, the CPD is searching for an “old, four-door white or silver car with [a] loud muffler,” which may be connected to Sunday’s shooting.

The locations of both shootings fall within the patrol area of the University of Chicago Police Department (UCPD), which extends from East 37th to 65th Streets and South Cottage Grove Avenue to Lake Shore Drive.

According to both Sullivan and UCPD spokesman Bob Mason, it is not known whether UCPD or CPD was first on scene.

Although UCPD has recently become a “full service” police force, with broader ability to detain and process suspects within its patrol area, Mason stated that investigations of shootings remain under the exclusive jurisdiction of the CPD. While he could not comment on the two pending investigations, Mason suggested that many similar incidents are gang-related.

“The majority of shootings in this area are connected to local gangs. They also tend not to be ‘random,’ but rather premeditated targets,” Mason said.

University students did not receive a campus security alert about the incidents because they did not fall under the UCPD’s guidelines for issuing the alerts, according to University spokesman Jeremy Manier.

“None of them occurred on campus, in a non-campus building as described in the guidelines, or ‘in the area immediately contiguous to such University property including the adjacent street and the sidewalk on the opposite side of the street,’” he wrote in an e-mail.

Manier added that certain crimes that deviate from the guidelines may merit a security alert.

“Beyond considerations of location, security alerts may be issued when a crime is considered to be a continuing threat to students or other members of the University community. That can be the case when a crime is part of a pattern, or if it was a random act and there is reason to believe that others might be targeted. In [these two cases], there was no information suggesting that others in the community might be targeted,” he said.

The security alert guidelines do not state explicitly the designation of on-campus versus off-campus crimes, but Mason told the Maroon in April that UCPD considers “the south curve of 55th Street” the northern boundary of campus.

In light of the recent incidents, Mason advised students and faculty to be highly aware of their surroundings.

“If you’re going to a place where somebody recently got shot in an alley, that speaks for itself. Nobody needs to be paranoid, but everybody should be aware that incidents like this do occur,” Mason said.

According to the UCPD Incident Reports, two additional shootings occurred within UCPD patrol area this weekend. One occurred Friday at 3:45 p.m. on South University Avenue between East 64th and 65th Streets. It involved a person firing a handgun on the street during a disturbance. No injuries or damage were reported, and CPD later recovered the gun from a trash can.

Another shooting occurred on Saturday at 5:52 p.m., on East 63rd Street near South Drexel Avenue. The victim was wounded in the leg.