With kitsch and corn, HPAC steals the Midwest

As a group of artists grapples with consumerism in the heartland, "Sometimes you begin to wonder whether you're looking at art or stuff from your Aunt Sue's den." 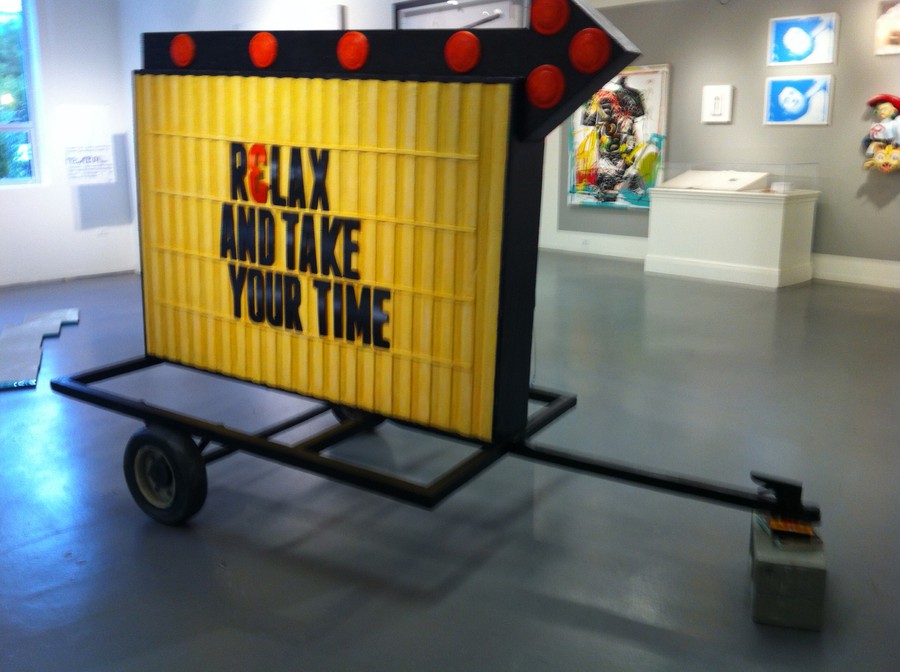 The legally questionable practice known as appropriation has been one of the most significant ongoing preoccupations of American artists and art critics in recent decades. Beginning in the ’60s with Andy Warhol and continuing into the ’90s, American artists—specifically those in the New York avant-garde—have lifted images from popular culture and used them in their art. Think of Warhol’s Campbell’s soup cans, Richard Prince’s Marlboro cowboy ads, and Roy Lichtenstein’s comic strips.

At the new exhibition, A Study in Midwest Appropriation, which opened at the Hyde Park Art Center (HPAC) on September 29, 30 artists from Chicago, Detroit, Milwaukee, and Minneapolis are taking a Midwestern stab at appropriation. The result: humor and self-deprecation. Sound appropriate?

Appropriation art as defined by art critic Tony Godfrey in his book Conceptual Art is “the act of one artist assuming the work of another artist and claiming it as their own.” In Midwest Appropriation, the artists “steal” a subject matter both typically Midwestern and non-Midwestern using an extensive array of media including sculptures, photography, drawing, written documents, prints, and collages. With some of the appropriation, it is blatant as to how the artist is “stealing” content—a literal Sony mini-TV—while other techniques are less obvious, as is the case with a collage of cut up images of Bob Marley.

The show, curated by painter and critic Michelle Grabner—who is also co-curating the 2014 Whitney Biennial—includes stacks of wooden VHS tapes, a cinder block sculpture in the shape of the Great Pyramids, a collection of signed photographs from local Chicago news anchors, even an ugly little weed growing out of the side of the gallery wall. Some of the pieces are easy to grasp, while others are more cryptic, especially to a non-Midwestern native. Grabner writes, “How these [Midwest] artists decide how the [images in the exhibit] are used and by whom is an open question, but there would appear to be little or no proprietary interest in the images themselves.” Indeed, the longer you look, the more possible readings of the artworks emerge, especially in terms of how they relate to appropriation: Sometimes you begin to wonder whether you’re looking at art or stuff from your Aunt Sue’s den.

While it may seem ironic to call appropriation art original, many of the pieces across the Midwest Appropriation gallery’s two rooms are more unique and thought-provoking than you would initially expect. For example, a made-from-scratch yellow sign on wheels reads, “Relax and take your time, sale!”; there is a giant blown-up photograph of the front page of The New York Times travel section with an article on the topic of wellness on one wall; and a freestanding billboard for a night club that has a mystery DJ and an open mic. All these mention various aspects of Midwestern life that often go overlooked. But these are the sorts of things Midwesterners see and eat and watch and do; the artists seem to be saying: It isn’t glamorous or beautiful, but it’s easy to poke fun at.

Some of the artists take a more aggressive stance toward their Midwestern pride. A multimedia piece—that includes photographs of Wisconsin cheese, labeled Frisbees, and the artist’s personal notes scribbled over amateur photographs of young people in their kitchens—also expresses outrage at the American media’s lack of concern with the Midwestern current events and issues. The text on one of the photographs reads: “What made Sandy more newsworthy than Riverwest?... Why should Milwaukee care for Chelsea when New York never cared for Riverwest?”

Midwest Appropriation poses a lot of questions and provides little relief. It makes an appeal to the anthropologist, the historian, the media junkie, the hoarder. If New York artists often used appropriation to comment on the role celebrity and fame play in New York popular and consumerist culture, the Midwestern artists exhibited at HPAC are interested in the kitschy, unsophisticated, homey objects and images from everyday life in the region, hopefully leaving patrons with some little or grand discovery about consumerism in the heartland.

A Study in Midwest Appropriation is at the Hyde Park Art Center through January 12.