With great power: That giants walk the earth

The allure of comic books is not the escape they offer into other worlds, but what they tell us about our own. 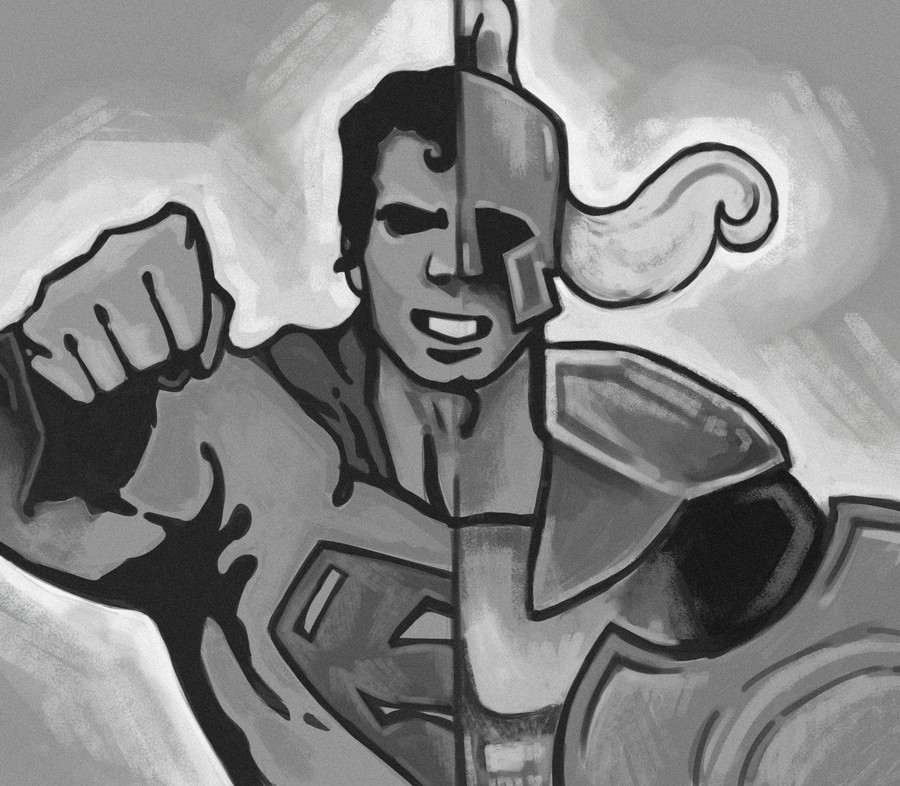 I found myself reading comic books last year, during an exceptionally severe bout of senioritis. It was an uncontrollable impulse (not that I tried to control it), resurrected by nostalgia for something half-forgotten: a desire to hear again the echoes of Saturday morning cartoons, and to see again those distant panels on pages long forgone for the educational promise of books without pictures. On that fateful day, I embarked on a journey to my high school library. I scanned the shelf, finding a handful of titles of which I had heard. I like to think that at that moment, a child in my head was singing “Tolle lege!”, so vast was the world I was about to enter—in truth, the voice probably said something more along the lines of “YOLO.” As my arm reached out for Superman: Red Son, I looked apprehensively around me, not wanting to be caught in what might as well be the children’s section of the library. I took the book, hurriedly settled myself in the nearest armchair, and started reading.

Superheroes make for a peculiar object of our fascination. Who can explain how a bunch of men and women in tights managed to pervade popular culture for so long? They’re silly! They’re ridiculous! They’re childish! Yes, I admit it: superheroes are all of these things, especially the last. Childish. It is quite true that the genre is more often considered a juvenile diversion than a serious art form. Indeed, children in particular seem to have an affinity for the superhero—and the reason isn’t very difficult to figure out. Superheroes can do stuff that children can’t. Superheroes have everything that children don’t: respect, power, and recognition. A particularly direct example is that of Captain Marvel, whose alter ego, twelve-year-old Billy Batson, needs only shout “Shazam!” to magically transform into a tall, hunky superhero, sporting a bright red suit complete with a suave shoulder cape and shiny gold lining. A boy with such an identity reflects a not-so-private longing in the mind of every little boy who has ever lived: the longing to be larger than life.

The desire to transcend the boundaries that are set upon us is by no means exclusive to children. Plenty of adults like superheroes too, and obviously it is the grown-ups who draw the comics, write the stories, and shoot the movies. This might suggest that many adults are simply children inside, and that the world of the superhero serves as a fanciful diversion from the hardships of reality. The idea that obtaining superpowers can solve our problems is certainly comforting; it is for this reason that we often cry out, “I’m not Superman!” as a way of acknowledging our own limitations.

But any true comic book fan will know that this idea cannot stand by itself. It is often the case that the acquisition of superpowers creates proportionately super problems, a notion now immortalized in the dying words of Spiderman’s Uncle Ben: “With great power comes great responsibility.” Superheroes don’t have it easy, and it is significant that some of the most iconic superheroes have their origins in vulnerability: there can be no Batman without the murder of Thomas and Martha Wayne, nor can there be a Superman without the destruction of Krypton. Further, vulnerability gives birth impartially to superheroes and supervillains alike, as can be seen in the Joker’s origin story in The Killing Joke: “All it takes is one bad day to reduce the sanest man alive to lunacy.” In a way, superheroes are no different from the rest of us; the mere possession of superhuman strength does not make one superhuman, in the same way that a bigger body does not turn a child into an adult. It would then seem to follow that the superhero genre is as much a normative art form as it is a positive one. As the saying goes, we don’t read to learn about other worlds, but to learn about this one. There is something in the burdens of the powerful that resonates strongly with our humanity.

I find that my ruminations on comic books resurface unexpectedly in familiar and unfamiliar places, most recently in my Hum class. I was reading the Iliad, and I couldn’t stop thinking about superheroes. My professor likes to call the work a profound meditation on mortality: the heroes and the nameless, the brave and the cowardly, those loved by the gods and those who are not—they all share the common destiny of death, that same fatal fate. How different is Achilles, the most deadly and most doomed of the Achaeans, from Superman, whose most persistent enemy is not Lex Luthor, but his own strength? Might we see in Achilles’s vindictive, unbridled rage against the Trojans the silhouette of Gotham’s caped crusader? Indeed, the most godlike human in the Iliad must reconcile himself with his mortality, just as the superhero must come to terms with his own vulnerabilities.

Giants do walk the earth, and we are the giants.

Ken Jung is a first-year in the College.