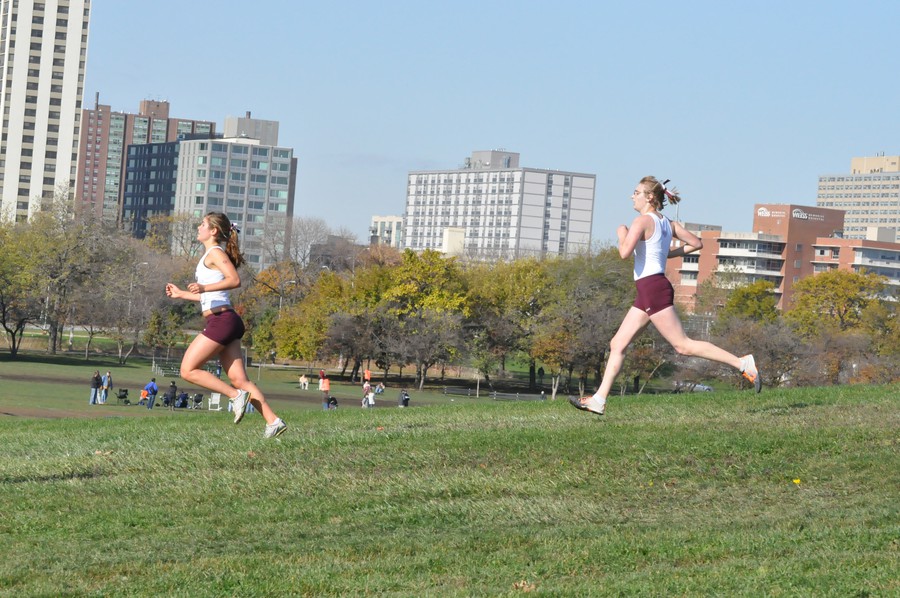 The women's cross country team will compete in the UAAs this year.

The high point of the season has arrived and the race for the conference title is tighter than ever. This weekend the Maroons will travel to Pittsburgh to compete in the UAA Championship for a chance at a conference title. The men have not won the conference since 2004 and the women since 2012.

Both squads took last weekend off from racing in order to prepare for the upcoming race. The Maroons have been running since the end of August, before school even started, and thus it was time for some rest.

“We are in our final training phase of the season so our primary goal in terms of practice is to begin recovering from the fatigue of a difficult training phase while still maintaining our fitness,” head coach Chris Hall said. “Our workouts have become less intense, and the races are much more intense.”

Six out of the eight teams on the men’s side received ranks in the national poll this past Wednesday. Rival Wash U leads the way as the second-best team in the nation. NYU follows next at seventh with the South Siders trailing not far behind at 14th. The Bears and Violets will be the Maroons’ toughest competition.

“I do not have a strategy to defeat Wash U,” Hall said. “We need to stay focused on how we race best and if we’re in a position to challenge teams ranked in front of us, that would be great.”

The women’s race will be even closer. The women also have six teams ranked in the nation. NYU leads the way with the eighth spot, immediately followed by Chicago at ninth and Wash U at 10th. Hall acknowledges the competition will be tight, but has other concerns as well.

“Midterms, sleep, and not racing with the approach [we] used throughout the season are our biggest concerns right now,” Hall said.  “We need to continue to be ourselves and not let the importance of a conference meet dictate a new personality.”

At the beginning of the season, the Maroons had the chance to race Wash U only once. During the Brooks Invitational in Oshkosh, WI, Chicago’s men came in sixth, four spots behind rival Wash U. The women were able to hold off the Bears, beating them by the slim margin of four spots.

“In terms of our tactics, nothing will change,” said fourth-year captain Dan Povitsky. “We’ll aim to go out slightly aggressively so as not to get swallowed up by a large field, find teammates and run together, and move up through the later stages. With the field being much smaller than our usual meets, it’s important that we stay focused. Less bodies means less targets to chase after, but the fact that these are our conference opponents should rile us up and drive us to pass people as we near the finish.”

The men will find it difficult to overcome Wash U and NYU. At the Brooks Invitational, Wash U had all seven of its runners finish before Chicago’s second runner even crossed the line. NYU will be tougher to judge as the Maroons have not yet gone toe to toe with the Violets. However, a No. 7 ranking in the country does not come without some good races, and thus the Maroons will have some trouble catching these New Yorkers.

The women, on the other hand, have a shot at the title. Having not yet faced NYU this season, the national rankings have moved the Maroons and Violets back and forth. However, most weeks the Maroons held the top spot. At the Brooks Invitational, Chicago dealt with numerous injuries throughout the course and still defeated Wash U. If nothing goes awry, the South Siders should come home with a conference championship in their hands.

“The hay’s in the barn. We’ve put in the work and all we need to do now is reap the benefits,” Povitsky said.

The UAA Championships begin at 11 a.m. ET in Pittsburgh tomorrow.