The Sovereign Statement, the latest from the Neo-Futurists, aims to establish a micro-nation in the theater. “If the ending feels predestined, it’s because it must be, by the nature of both drama and politics.” 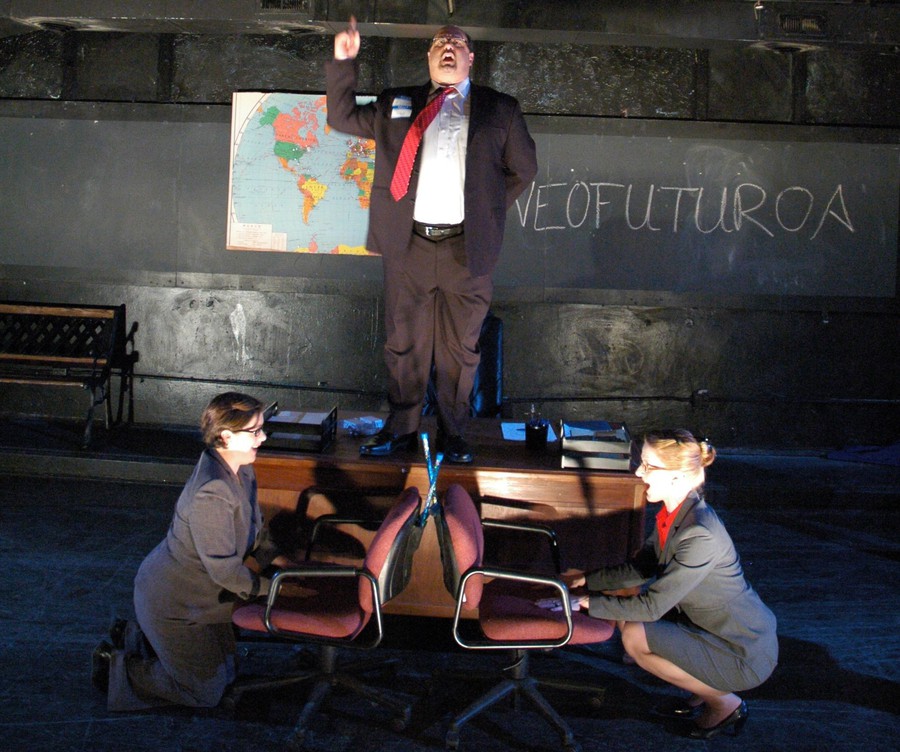 What is a nation? Is it a collective identity, a physical boundary, a set of rules? Or is it a narrative? The Sovereign Statement, the latest from the ever-inventive Neo-Futurists, attempts to explore and deconstruct the concept of a nation by establishing the theater itself as its own sovereign entity, with alternately hilarious and deeply unnerving results.

From the onset, the play is nothing if not self-aware. After musing on the nature of nations and defining a nation as a “narrative,” playwright Bilal Dardai sets the performance in motion by informing Phil Ridarelli of his new status as protagonist of the play. Ridarelli is to assume the role of leader in the theater company’s attempt to establish the Neo-Futurarium as a micro-nation. Aided by Jen Ellison as his sternly competent adviser, Gwynn V. Fulcher as Ellison’s devoted underling, and Mike Manship and Clifton Frei as interchangeable lackeys, the disoriented Ridarelli is guided (or rather, goaded) through the process of nation-building. The audience members, established as citizens of this new nation, are given the chance to vote on the name of this new state, the first in a string of apparent choices that seem to influence the direction of the nation.

The play cannot be said to break the fourth wall because it never goes through the trouble of creating one. Dardai reappears periodically to offer cryptic guidance to the play’s participants, acting at different points as a narrator, a director, and a notary. “Citizens” are included in the action of the play, even physically moving as factions emerge and having lines given to them in shows of solidarity. Yet the actual influence of the populace on the outcome of the performance is limited at best. When in doubt, the actors/advisers refer back to the script for justification and guidance, creating some amusing moments of sudden perspective. This lends a sense of inevitability to the action even as it is portrayed as allegedly spontaneous.

As Ridarelli becomes more comfortable in his role as protagonist, his actions become increasingly erratic, and the idealism of the new state quickly falls through. Paranoia and dissension become driving forces, leading to a climax that is as unexpected as it is retrospectively obvious. While the unconventional structure of the play, which cannot be described for fear of spoiling the fun, helps to push the political thriller forward, standout performances make the action ultimately believable even through constant references to script and time limits. Ridarelli becomes uninhibited as only someone with unchecked power can, while Ellison embodies the trope of the take-no-prisoners adviser with terrifying and truly convincing zeal. Fulcher’s character is less of a caricature and more relatable as a downtrodden idealist, and her simultaneous passion and vulnerability create emotional impact that might otherwise have been lacking. Although Manship and Frei are given less to work with in terms of action and dialogue, they succeed in becoming entirely distinct and convincing characters who push the story along nonetheless.

Though well-written overall, the play at times works too hard to stay meta. By the end, the point has made itself abundantly clear, and though the ending monologue by Dardai pulls back the curtain and offers explanation and context, it hammers in the message a bit too redundantly. However, it succeeds in deconstructing concepts often taken for granted and, for the most part, does so humorously and naturally. If the ending feels predestined, it’s because it must be, by the nature of both drama and politics. After all, a nation is a funny thing.

The Sovereign Statement is playing at the Neo-Futurarium through November 23.