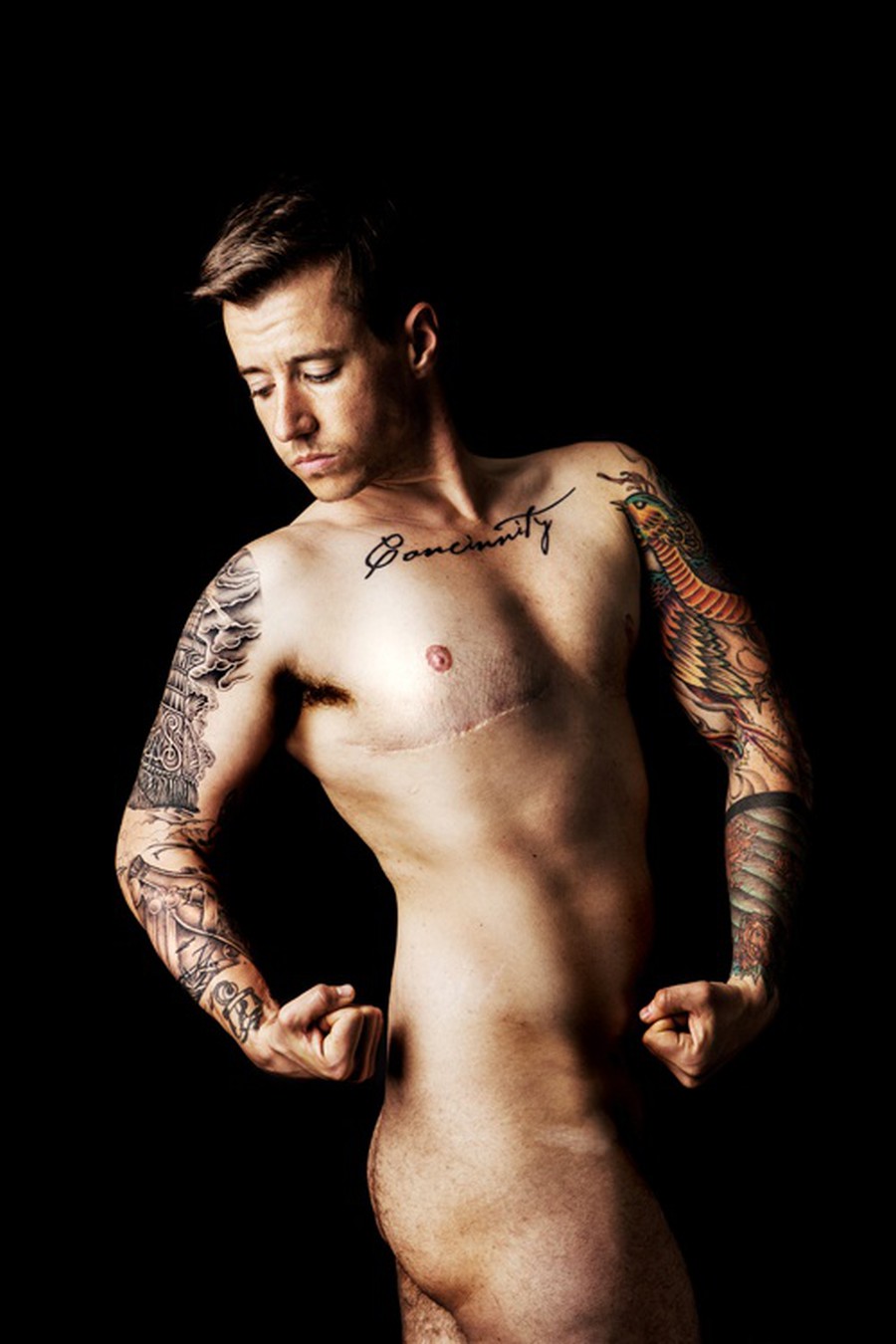 Upon entering the new Gray Center Lab, one might not immediately grasp the concept behind the exhibition on display. Images of tattooed bodies sway in near-stillness, as transparent medical reports hang in ominous silence across a room punctuated by video projections and text blocks. However, though the individual elements might seem disparate at first, the materials presented in Resisterectomy, a collaborative project led by Toronto-based artist Chase Joynt, are anything but haphazard. Rather, they present a complex and highly considered conversation regarding body alteration, as considered through the lens of transsexual reassignment surgeries and cancer surgeries.

Against the gallery’s whitewashed walls—likened to the sterile corridors of anonymous hospitals—the bodies present vivid, organic forms that establish a tension with the starkness that surrounds them. In the midst of metal railings, jutting walls, and concrete floors, the photographs and projections in Chase Joynt’s Resisterectomy possess an unexpected serenity. Though the exhibition certainly emphasizes the violence of the surgical process in its many personal and institutional manifestations—from diagnosis to treatment to recovery—it more robustly seeks to find the beauty and power that can emerge from these processes.

Joynt, who received a Mellon Fellowship in conjunction with the University’s new Richard and Mary L. Gray Center for Arts and Inquiry (the studio branch of which is now located in Midway Studios), arrived in Chicago eight weeks ago in order to prepare for a class he is co-teaching with sociology professor Kristen Schilt. Like the Gray Center itself, which involves artists and professors from various fields in experimental projects, Resisterectomy pulls from a wide range of influences to produce a strong yet nuanced statement regarding body identity through the lens of surgical intervention. I sat down with the artist to discuss his work.

Chicago Maroon: What motivated you to juxtapose, or rather compare, these two medical scenarios that people don’t often put in the same conversations?

Chase Joynt: I was undergoing various surgical procedures related to my transition and was having a hard time with the way I was feeling and the way I was being treated. While I knew my experiences weren’t singular in that regard, I was also feeling incredibly isolated. As an artist and filmmaker, I often try to work through these types of situations creatively. I asked myself, “How can I reframe this narrative?”…. I decided that one of the ways to approach these ideas might be through exploring a counter-narrative to mine. As a trans person, I wasn’t looking for someone who had encountered these experiences or procedures for “similar reasons.” In retrospect, I think I was seeking what I thought to be my “antithesis”—a cisgendered, relatively normative suburban woman, possibly who had experiences with breast and/or uterine cancer…. Through friends of friends, I was connected by e-mail to Mary Bryson, a faculty member at the University of British Columbia. Mary responded to my inquiry swiftly with something akin to, “Hi, Chase. I’m not sure why/if you’re looking for a woman per se, but I find what you’re doing interesting, so let me know if you’d like to chat further.” I thought to myself, “In this one e-mail, the assumptions I was making about what this project could be, who I was, and whom I thought I needed have been revealed to me.” From that moment, the context and content of our collaboration was revealed.

CM: This is obviously an incredibly personal project. Have you done other works that are this personal in the past?

CJ: All of my work is rooted in some form of first-person investigation. However, the degree to which each project reveals “intimacy” or “intimate details” about my life always shifts and changes. I find the constructed reality of lives very interesting, and even my desire to strategically fictionalize content is rooted in things historically perceived as nonfiction.

CM: This show was first exhibited in Vancouver. Have you noticed any differences in the way it was received there as opposed to here, within the Chicago-Vancouver context, or approaching it through the University lens?

CJ: I installed the show in Vancouver as a result of a generous invitation from the Feminist Art Gallery to experiment with new work. At that time, the show could have been summarized as a glorious work in progress. The photographic images were installed on paper, the pathology reports didn’t exist, and the broader aesthetic feel was still forming. There’s a way in which Vancouver served as an incubator for these ideas….The show opened during SWARM, Vancouver’s all-night art crawl where people travel from gallery to gallery throughout the city. Because of this, some people didn’t know who I was, and others weren’t necessarily interested in the show content—this combination caused viewers to react freely in a variety of ways. The experience taught me a lot about being in public with my work, and watching how people interact with what they proclaimed to be “very provocative information.” Entering a space like the Gray Center Lab in Chicago, when the aesthetic quality of the show has shifted dramatically, I feel more familiar with how it looks and feels to be around this material and better equipped to experience what this material brings up for people in public.

CM: So, on the semi-topic of being provocative, Mary’s writing talks about “entering a space for serious play.” I’m wondering, in terms of motivation, how much of this was a creative venture and how much was a sort of “serious” one?

CJ: I don’t think I can separate the serious from the creative in this context. For us, the entire project was, and still remains, an experiment. It’s an experiment in narrative, it’s an experiment in image making, and it’s an experiment in image breaking. Mary and I continue to learn about what play means as we navigate this work together. We actively acknowledge and simultaneously subvert various stories about bodies, gender, trauma, and cancer, and in doing so understand the risk in our “play.” Play can have consequences, and play can also encourage incredible openings and insights into places and moments previously unfelt and unseen.

Resisterectomy is on display at the Gray Center Lab through December 8.