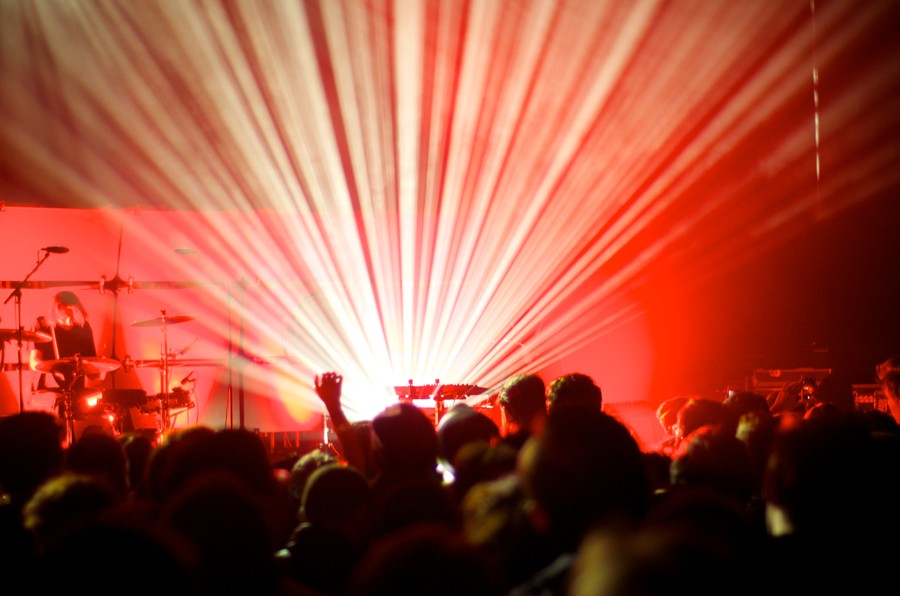 When I went to see James Blake at the Riviera Theatre on Wednesday night, I was expecting the soft, pulsating electronic music that I have heard so many times on record, accompanied by Blake’s haunting, soulful falsetto. After all, this is what he has come to be known for—presumably, this innovative meld of disparate elements is what helped net him the 2013 Mercury Prize for his sophomore LP, Overgrown.

Of course, I got that—it would not be a James Blake show without songs like “Limit to Your Love.” From time to time, the bass elements that typically lurk beneath Blake’s croon leapt forward unexpectedly, swallowing everything else in the room. Tracks like “CMYK” were practically danceable live, but as the set moved toward its conclusion, the wall of bass morphed into a sinister, pounding attack. This manifested itself on songs like “Voyeur,” a track that sounds much more friendly on record than it did live.

Blake’s affinity for massive bass comes from his upbringing in the U.K. dubstep scene, and he has always applied the manipulative sensibilities of the genre toward his vocals. In light of these decisions, some have dubbed Blake’s music “post-dubstep.” Seeing this translated to a live environment, with the assistance of a guitar player and a drummer, was even more fascinating than hearing it on record. In particular, “The Wilhelm Scream” benefited from a new arrangement that featured a much more prominent guitar part than on James Blake. Blake began the show with “I Never Learnt to Share,” capturing a vocal loop that also caught the audience’s cheers. The cheers looped back beside Blake’s vocals, creating an eerie effect that fit right in with the endless repetition of the only lyrics for the track: “My brother and my sister don’t speak to me/ But I don’t blame them.”

Blake’s vocal modulations continued throughout the show, but they came to a head when Blake came back to the stage for an encore, leaving his drummer and his guitar player back in the green room. Before he began “Measurements,” he asked the audience for silence so that audience members “weren’t in this one.” With each repetition of the song’s simple refrain, Blake recorded another loop, until he had built a chorus of his voices, echoing throughout the theater. The reverent silence of the audience instilled the track with a certain religious quality, rather than simply being the product of a series of electronic manipulations. The loops continued as the audience made its way to the exits, even after Blake had left the stage.

Despite being fairly noisy throughout the night, the audience remained quiet even while shuffling out of the Riviera and into the street. Blake’s ability to capture the attention of thousands is a rare gift. Even more impressive is the fact that he is able to captivate with his massive, punishing bass as well as his soulful, yearning melodies. This meld of disparate elements is what makes a James Blake show so powerful—the unexpected turns render Blake’s performance visceral and raw, imbued with a unique, vital energy.