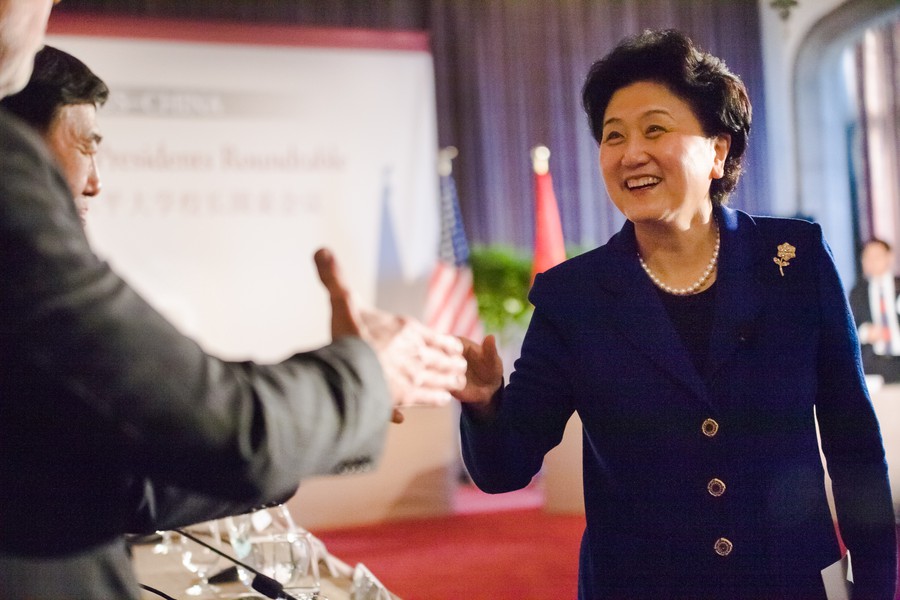 Liu’s visit kicks off a four-day trip to the United States that ends Thursday in Washington, where she will meet with Secretary of State John Kerry.

In her remarks, Liu said higher education forms a substantial part of diplomacy.

“Cooperation and exchanges between universities have built a bridge of friendship between our two countries and become one of the most closely related and effective areas in our people-to-people exchanges,” she said in remarks translated from Mandarin.

In his introductory remarks, Zimmer pointed at UChicago’s efforts to engage with China, citing the Center in Beijing and the forthcoming Booth campus in Hong Kong.

“With the enormous amount of change, both economic and social, taking place in China…our faculty and our students will want to understand this change, build a set of collaborations, and be active in thinking about all this change,” he said.

Liu noted that China, with its relatively short history of systematic higher education, hopes to learn from the U.S.

“China is a large country for higher education but not a strong one,” she said. “Compared to America, we have a lot of shortcomings. The first modern Chinese university was established just 100 years ago…whereas America’s first university, Harvard, was founded almost 400 years ago.”

The roundtable comes just a week after Beijing announced reforms to long-standing policies, such as loosening the one-child policy. In her speech, Liu highlighted proposed educational reforms, which include changing China’s notoriously demanding college entrance exam, the gao kao, and “promoting educational equity” between students in rural and urban areas, the source of major inequality in China.

University presidents responded to Liu’s remarks by noting the importance of higher education exchanges between the East and West, the effects of which sometimes are seen outside the classroom.