Chicago fails to convert in red zone, falls to Wash U in season finale 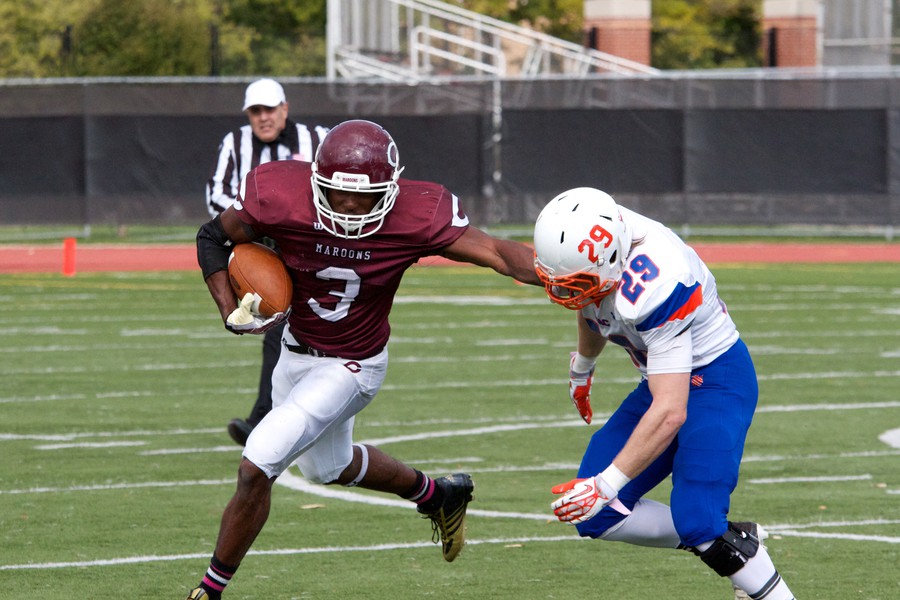 If the Maroons have been nothing else this season, at least they’ve been consistent.

Throughout the year, the Maroons played well in most aspects of the game, but simply couldn’t capitalize on opportunities to score.

“No question, the effort and desire were there, but when it came down to finishing, we just couldn’t execute,” said third-year linebacker Schuyler Montefalco, reflecting on the entire season.

Out of 24 trips into the red zone, Chicago only scored touchdowns on 11 of them all year, a 46 percent scoring rate compared to opponents’ 59 percent.

The story was the same against Wash U: The South Siders’ defense forced two turnovers, but the offense couldn’t convert either of those two possessions.

Chicago only scored on a 74-yard drive late in the fourth quarter. At that point, the Bears had a 10–0 lead and only increased it to 17–7 after the sole Maroon touchdown.

“We had opportunities to change the game in our favor, and we weren’t able to take advantage of them, [but] we never gave up and continued to fight all game,” he said.

In his final collegiate game, fourth-year quarterback Vincent Cortina completed 18 of 36 passes for 159 yards. Even though he didn’t go out with a win, Cortina can look back on the season with pride, as he improved as a game manager and set career highs this season against Rhodes with 354 passing yards and five touchdowns.

Chicago’s offense struggled in the last few games, though, averaging just 7.5 points per game in its last four. The Bears outgained the Maroons 344–228 yards on offense.

“I think that we could have played smarter and a little more aggressive all around,” Montefalco said. “When we get to the end of the season playing for a UAA Championship against a very good rival, nothing short of a perfect game is going to get the job done.”

This Maroon team definitely took some steps in the right direction this season, though. Montefalco credits the hiring of head coach Chris Wilkerson.

“Coach Wilkerson has started something unique here, and this team—especially myself—is passionate about continuing and even expanding the values and traditions he has implemented in hopes of becoming a force to be reckoned with,” Montefalco said.

Montefalco anchored a defense that was the strength of the Maroons, a team whose chemistry improved, even in the face of a coaching change.

“Our season was without a doubt a success. 6–4 was not our ideal record, but our achievements extend far beyond the field and what our record reveals. For the first time in my tenure here this team came together and transformed itself in a short period of time,” Montefalco said. “I was so proud of how our team acclimated to the change, and we became closer because of it. We got better each week and most importantly we created a brotherhood that will be the foundation for years to come.”

“Our [fourth-years] may not have walked off with a championship, but the legacy they left and the foundation they have laid marks a new era of Chicago football that will hopefully continue in the following years,” Montefalco said.